Faynan Copper mine in present-day Jordan, ancient Edom.
This site is the Jordanian counterpart of the copper works at Timna.


Mohammad Najjar and Thomas Levy have been excavating at an ancient copper mine site in the Faynan district of Jordan for more than 20 years. Copper has been mined here for 12,000 years, and the copper smelting here has been done since 4,500 years ago.

This area was part of Edom, a land ruled by the Horites listed in Genesis 36. They are described as having a red skin tone and the ancient Greeks called Edom "Idumea" which means "land of red people." Edom was part of the Nabatean kingdom and the Nabatean warriors resembled the red Nubian warriors with their long wavy hair and the wearing of feathers on their legs. 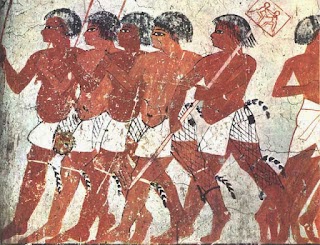 The Horites were devotees of Re, Horus and Hathor. Hathor was venerated as the patroness of miners. Petra reflects Horite beliefs.

Faynan’s twin is the site of Timna in the Negev desert of Israel. In 1934 the area was surveyed by the American archaeologist Nelson Glueck. The area was also surveyed by Beno Rothenberg of Hebrew University between 1959 and 1961. Professor Rothenberg discovered a temple dedicated to Hathor at the southwest edge of Mt. Timna. The smelting works, slag and flints at Timna were found to be identical to those discovered near Beersheba where the elderly Abraham lived with his cousin wife, Keturah. In his book Timna, Rothenberg concluded that the peoples living in the area were "partners not only in the work but in the worship of Hathor." (p. 183)

Beersheba is at the southern boundary of ancient Edom. Both Edomite and Midianite pottery have been discovered at Beersheba. A four-horned brazen altar identical in structural to the altar used later by the Israelites was uncovered in 1973. This discovery was made by a team under the direction of Yohanan Aharoni and Ze'ev Herzog of Tel Aviv University. The team first encountered an ancient storage wall that contained the stones of the altar. Three of the stones still had large horns projecting from them, but the horn of the fourth stone had been broken off. Yet still another stone had the carved image of a serpent, probably indicating Kenite construction. The stones, which had been incorporated into a wall, were reassembled to assume their former shape and dated to the time of the Patriarchs. The altar may have been destroyed during Hezekiah’s attempts to eradicate all shrines outside Jerusalem.

Related reading: V. Kassianidou and A. Bernard Knapp, Archaeometallurgy in the Mediterranean: The Social Context of Mining, Technology and Trade; Red and Black Smiths; The Edomites and the Color Red; Afro-Asiatic Metal Workers; The Re-Horus-Hathor Narrative; Edom and the Horites