From very ancient times humans have recognized number patterns and derived meaning from the patterns. Consider the Pythagorean triangle. According to the Delphic priest Plutarch (46 - 120 A.D.), the Egyptians attributed the sides of the triangle the numbers 3, 4 and 5. The vertical line of 3 is the Osiris line and number. The horizontal line of 4 is the Isis line and number, and the hypotenuse was the Horus line and the number 5. The triangle then represents the male and female principles and the issue of the unity of male and female. That said, the verticality of the hypotenuse indicates that the son is like the father in sharing uprightness or virtue.

The association of the number 4 with the horizontal line also explains why 4 represents the whole earth, over which the Sun makes its daily journey from east to west.  There is also the relationship of the 4 cardinal directions which, when connected, form the perpendicular lines of the cross, a fundamental symbol in creation.

In music, the 2:3 interval on a string instrument and keyboard determines the vibration of the perfect fifth. All other harmonic intervals relate to this 2-3 harmonic interval. This suggests something about human communication also, that single phonemes will seek a second and third.  We see this among the oldest known languages of the Afro-Asiatic group. The Chadic/Kushitic languages of Abraham's ancestors tended to have 2-syllable words whereas Hebrew and the languages of Mesopotamia tended to have 3-syllable words.  There is an interplay between 2 and 3-syllable words in the Hebrew Bible that speak of the mystery of God, an area for further investigation. The 3-syllable words build on the 2-syllable roots, so that Ka-Ba becomes Kaba-lah.

A similar interplay is seen between 2 sons ans 3 sons in the genealogies of Genesis. There are usually 3 first-born sons listed, but the plot of the narrative will involve competition or intermarriage between only 2 of the 3 first-born sons. The third son is often "hidden" or dies.  In Genesis this points to the hidden issue of the Woman (Gen. 3:15). Kain, Seth and Abel were brothers, but Abel was killed by Kain. Terah's sons were Haran, Nahor and Abrham.  Haran is said to have died in Ur. Abraham had 3 first borns sons: Joktan (Yaqtan), Ishmael (Yishmael) and Isaac (Yitzak).  Joktan was probably Abraham's oldest son. The biblical interplay between 2 sons and 3 sons is highly symbolic.

The number 3 compels us to seek the hidden, just as Abraham sought guidance about his unknown future at the Diviner’s Oak near Hebron (Gen.13:18) between Ai and Bethel. Here he later looked up and saw 3 “men” coming to him and ordered 3 measures of flour to make cakes and brought to his visitors 3 gifts: curds, milk and a calf. And Abraham interceded for Sodom 3 times (Gen. 18).  It is in the context of this proliferation of 3s that the Lord announces that Sarah will bring forth a son.

In the Hebrew gematria 90 is the value of the Hebrew word for Water - Mem (mem-yod-mem), but the letter W as the symbol for water comes from the ancient Egyptians who would have used W to represent the waters above and M to represent the waters below, the 3 "feet" of the letters determine the location of the waters.  As they didn't use zero numerically, the 3 above and the 3 below would be regarded as belonging to the one cosmos represented by the sphere - 0.

Numbers are an interesting and useful device in tracking the tribal and ethnic origins of a document. For example, the Chinese avoid using the number four, which they regard as a bad omen, yet four is a sacred number to the Plains Indians of North America and is used in ceremonies and rites, such as the Vision Quest.

In the Bible we are able to track the origin of some narratives using number symbolism. The Hebrew Bible comes to us from the Afro-Asiatics whose number symbolism can be classified into western and eastern traditions. In the Nilo-Saharan tradition the number forty appears often, as the Nile flood lasted 40 days, but forty doesn't appear in the Mesopotamia-Babylonian tradition.

For example, the story of Noah's flood speaks of rain for "forty days and forty nights", reflecting the 40-day flooding of the Nile. In the Book of Daniel, which is rich in number symbolism, the number forty doesn't appear even once. Noah's homeland was near Lake Chad in west central Africa and the Book of Daniel comes from ancient Babylon. So "the forty days and forty nights" in reference to Noah indicates that the context of his story is not Mesopotamia, but Africa. Likewise Israel's forty years of wandering in the wilderness indicates roots in Egypt.

The number 72 is highly symbolic in the Bible. Moses and Jesus appointed 72 to serve. The number represents the sum of the members of the heavenly Council. The idea can be traced back to the astronomy of the Nilo-Saharan ruler-priests.

The rabbinic idea that there are 36 tzaddikim in each generation is a semitic version of the Asian bodhisattva. The number 36 is half of the number 72 which was the number of deified rulers who would judge the world. They are called Horim. It was believed that half stayed in heaven and half served on earth. In the Qur'an these are called Houris. They have been cast as virgins in popular Islam. In a note to his fellow hijackers, September 11 ringleader Muhammad Atta reminded them of their impending "marriage in Paradise" to the 72 virgins promised in the Qur'an to the faithful departed. However, Islamic scholar Dr. Maher Hathout says that Houris refers to "beings of distinction."

These are deified rulers and to them we must add the saints. The seven angels with their seven trumpets of Revelation are accompanied by an angel who offers the prayers of the saints with a great amount of incense (Rev. 8:3). This angel is among the hosts that stand before the throne of God and who appear with the Lord at the Judgment. Consider Deuteronomy 33:2: "The Lord came from Sinai and dawned from Seir upon us; he shone forth from Mount Paran; he came from the ten thousands of holy ones, with flaming fire at his right hand." Seir was one of the principal regions belonging to the Horites (Gen. 36).


The Egyptian pyramids correspond in form to the number 72, as does Angkor Wat in Cambodia. The number 72 represents the precession of the equinoxes, that is it represents the numerical sequence linked to the earth’s axial precession, which causes the apparent alteration in the position of the constellations one degree every 72 years. It has been noted also that Angkor Wat is located 72 degrees of longitude east of the Giza Pyramids. 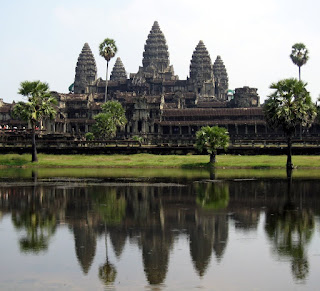