The Seventh Seal and Silence in Heaven


The number symbolism of Revelation 8 provides a key to understanding this section of the Apocalypse. Two numbers in particular must be considered: 777, represented by the seventh seal, the seven angels, and the seven trumpets, and the number 3, represented by the trio of sevens and by the destruction of one third of the earth. These numbers suggest that Revelation 8 is about God’s perfection and divine visitation.

In the Bible divine visitation indicates blessing and fulfillment of expectation or a promise made by God. Genesis 21:1-2 is an example:

In other Biblical references divine visitation has unpleasant results, indicating the Lord's wrath. Psalm 2:12 is an example. "Kiss the Son, lest he be angry and you be destroyed in your way, for his wrath can flare up in a moment. Blessed are all who take refuge in him." Philippians 1:10 speaks of the day of visitation as the "day of Christ" and 1 Corinthians 1:8 speaks of "the day of our Lord Jesus Christ."

Before the fall, God visited the Man and Woman in the garden in the cool of the day. Here perfect communion is symbolized by the trio together in the coolness of the garden. In the story of the Divine Three who came to Abraham in the heat of the day we have a different picture of visitation. Here the garden has turned to desert and judgment is signaled by the heat. We go on to read of the destruction of the cities of the plain, and in particular the judgment of Sodom where Lot was living. The juxtaposition of the two visitations conveys information about God’s mercy and judgment.

Revelation 8 speaks about the perfection of God’s mercy and judgment. When the seal is opened there is silence in heaven. This is interpreted as the calm before the storm, the dramatic pause in a sacred drama, or an indication of profound awe. For St. John’s readers, who believed “as in heaven so on earth”, this would also signify the great contrast or dissonance between the heavenly the earthly reality. We pray that God’s will be done on earth as it is in heaven, but we do not make the effort to mimic the heavenly existence. Were we on earth in tune with the events of Heaven, the heavenly silence would be reflected on earth. Instead, humanity continues about its noisy business as if nothing important were about to happen. The heavenly silence emphasizes the spiritual inattentiveness of the world. The image is heartbreaking and aims “at the nerves, not the head. One is meant to read and tremble and repent…” (Farley, The Apocalypse of St. John: A Revelation of Love and Power, p. 101)

Jesus calls us to watchfulness (nepsis). We are to be awake and in tune with the realities of heaven. This means learning to be silent in order that we might hear.


A call to repentance

Revelation 8 recalls the warning to the seven churches to “repent and do the things you did at first. If you do not repent, I will come to you and remove your lampstand from its place.” (Rev. 2:5)

The opening of the seventh seal signals the universal judgment to come and the opportunity to repent before that Day. The seven trumpets bring only partial destruction. Only a third of the trees, rivers, and celestial lights are destroyed. This warning represents an extension of God’s mercy, a time of grace wherein men may still acknowledge their sin and turn in faith to Christ our God.

Isaiah 30:18 reminds us, “Yet the Lord longs to be gracious to you; he rises to show you compassion. For the Lord is a God of justice. Blessed are all who wait for him!”

Matthew tells us that “If those days had not been cut short, no one would survive, but for the sake of the elect those days will be shortened.” (Matt. 24:22)

St. Peter explains, “The Lord is not slow in keeping his promise, as some understand slowness. He is patient with you, not wanting anyone to perish, but everyone to come to repentance.” (II Pet. 3:9) Unfortunately, this delay is taken by some as evidence that God does not exist and divine judgment is a fiction. This is the great delusion of the secular world.


The coming of the Son of Man

The seven angels with their seven trumpets are accompanied by an angel who offers the prayers of the saints with a great amount of incense (Rev. 8:3). This angel is among the hosts that stand before the throne of God and who appear with the Lord at the Judgment. Consider Deuteronomy 33:2: "The Lord came from Sinai and dawned from Seir upon us; he shone forth from Mount Paran; he came from the ten thousands of holy ones, with flaming fire at his right hand."

Compare this to the oldest section of I Enoch (The Watchers from about 300 BC): "And behold! He cometh with ten thousands of His holy ones To execute judgment upon all, And to destroy all the ungodly: And to convict all flesh of all the works of their ungodliness which they have ungodly committed, And of all the hard things which ungodly sinners have spoken against Him." (1 En 60:8).

Matthew 16:27 affirms this belief: “For the Son of Man is going to come in his Father's glory with his angels, and then he will reward each person according to what he has done.”

St. Paul also bears witness that “we must all appear before the judgment seat of Christ, that each one may receive what is due him for the things done while in the body, whether good or bad.”(II Cor. 5:10)

Priests and angels are linked in the Biblical descriptions of the coming of the Son of Man. The Orthodox Study Bible (p. 1725) notes that the angelic powers represent the Old Testament priests who sounded their trumpets during the temple liturgy (Jos. 6:12; 1 Ch. 16:6; Ps. 97:6).

The presence of priests and angels is a common feature of apocalyptic genre and found in other canonical and deuterocanonical texts such as the Books of Enoch. The Apocalypse of St. John is typical of apocalyptic literature in that it draws on representative persons such as Enoch as priest (See Adrei A. Orlov, Enoch as the Heavenly Priest). Doubtless, Enoch came to mind when John saw the angelic being before the altar of incense.

Enoch, the seventh from Adam, was taken (translated) to heaven according to Genesis 5:24. His name, which comes from anochi, has a double meaning. It means one who ascends and it means heir to the throne. Enoch ascended to the throne of his father Lamech who lived 777 years, and he ascended to heaven where he offers prayers with incense. St. John’s readers were familiar with the tradition of Enoch the archetypal intercessor and they associated him with the number 777 because his father is the only priest in the Bible assigned the number 777.

Lamech is a variant of the Akkadian and Egyptian word la-melech, meaning "priest of the King".  The word la-melech has been found inscribed on hundreds of seals. La-melech seals typically had the image of a scarab (dung beetle) or a sun disc. Both were emblems of the Creator. The sun disc was used as a royal seal by the Kings of Judah who were direct descendants of Cain and Seth.

The one offering incense in Revelation 8 is not a sacrificing priest, as Christ’s sacrifice has been accomplished once for all. This priest stands in the heavenly temple before the table of incense. He offers up the intercessions of the saints who endure tribulations on earth. In this sense he is the people's priest. 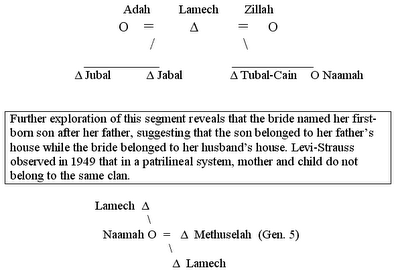 In Enoch 1, Enoch is described as "the righteous scribe" who records the vision. He is the seventh generation from Adam in Seth’s ruling line (Gen. 5:3-18). 1 Enoch 1:9 is quoted in the New Testament; evidence that the Enoch tradition was known to the New Testament writers. "And Enoch also, the seventh from Adam, prophesied of these [men], saying, Behold, the Lord cometh with ten thousands of his saints, To execute judgment upon all, and to convince all that are ungodly among them of all their ungodly deeds which they have ungodly committed, and of all their hard speeches which ungodly sinners have spoken against him." (Jude 1:14-15)

Why the reference to the seventh seal, the seven angels and the seven trumpets? The number 777 would remind St. John’s readers of Lamech, the only man listed in the Hebrew Scriptures who is associated with that number. In the thought of at least one of the Church Fathers, Lamech represents a penitent man. St. John Chrysostom commented: “By confessing his sins to his wives, Lamech brings to light what Cain tried to hide from God and by comparing what he has done to the crimes committed by Cain he limited the punishment coming to Him.” (St. John Chrysostom’s Homilies on Genesis, Vol. 74, p.39. The Catholic University Press of America, 1999.)

Chrysostom’s interpretation is consistent with the overall picture of God’s love and mercy, yet his view is not referenced in any Bibles. (The Orthodox Study Bible misses the mark in stating that "Cain did not believe in the grace of God"; see note on p. 9) Most Bible footnotes ignore that Cain received mercy, and incorrectly assert that God wiped out Cain’s line in the flood, a view which is not supported by the information in Genesis. Analysis of the Genesis 4 and 5 King Lists supports Chrysostom's interpretation, as we will see by tracing the number seven from Cain to his descendant Lamech the Younger.

The number 7 represents new life, mercy and renewal. Cain murdered and tried to hide his crime from God. Cain deserved death, yet God showed him mercy by sparing his life. Cain was exiled from his people and God showed him grace by placing a mark on him as a protecting sign. Reflecting on this great mercy shown to his ancestor, Lamech challenges God to show him greater mercy. If grace was shown to Cain (7), then the Elder Lamech, by confessing his sin, claims a double measure of grace (77). The Younger Lamech is assigned a triple measure of grace because he is said to have lived 777 years. Lamech the Younger is the son of Methuselah, the priest and the father of Noah the righteous.