Known in Joshua’s day as “the head of all those kingdoms,” Hazor is the largest tell in Israel at 200 acres. Hazor (H'- zr) likely refers to a city of refuge, a shrine city where people sought help and/or forgiveness. Horite Hebrew/Habiru priests were there and they were devotees of Ra-Horus-Hathor. This sheds light on the nature of the conflict between the Hebrew warriors under Joshua who attacked Hazor. It appears it may have been a conflict between Habiru and Habiru over control of the fortified shrine city. 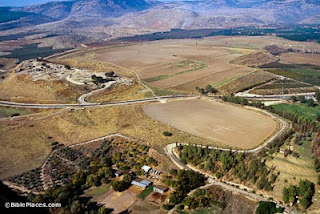 There are two accounts of the conquest of Canaan in the Bible. One would have us believe that the Israelites came out of Egypt and conquered the cities of Canaan under divine guidance. Those who want archaeology to validate the Biblical account will be content with this interpretation, but is it the most accurate interpretation?

Hershel Shanks has written that archaeology "sometimes provides evidence that seems to refute the Biblical account. That is the case, for example, with the Israelite conquest of the land as described in the Book of Joshua. The various cities that the Israelites supposedly conquered simply cannot be lined up with the archaeological evidence." (BAR, July-August 2013, p. 6)

Another version requires a deeper look at the Habiru (Hebrew) who were living dispersed among the Canaanites before the time of the Exodus. They were the priests, warriors, and metalworkers who enjoyed relatively high status in the Canaanite shrine settlements. Hazor was one of those shrine cities as evidenced by the discovery of the royal upper level with a chapel and offering table. The few preserved Egyptian hieroglyphs indicate that this shrine was dedicated by a Horite priest called Ra-hotep some time before 1250 BC.

The myth of dual origins appears to be true until one investigates the genealogical information and finds that the kinship pattern of Abraham and Moses is the pattern identified with and unique to the Horites. This should not surprise us since the Bible claims that Moses is a descendant of Abraham and Abraham's people were Horites whose cultural context was Nilo-Saharan.

The shrine cities in which Horites lived included Hazor, Ramah, Bethel, Jerusalem, Hebron and Beersheba. They were built on high ground and were mound settlements, as was Shechem, another Horite shrine, where there was an ombligo stone symbolizing the navel of the earth, or the sacred center. They had good water sources and were organized with separate neighborhoods for the ruling class and the commoners. Extended families lived in close proximity, usually with a common courtyard. The ruler's complex was on higher ground and included quarters for residential staff such as cooks, craftsmen, warriors and priests. The most holy shrine or small temple was often within the royal complex.

Ramah, about 4 or 5 miles north-west of Jerusalem, is an important northern shrine as it was the home of the prophet Samuel whose father's marriage pattern suggests that Samuel's family was Horite. The prophetess Deborah judged from her date nut palm between Ramah and Bethel (note the south-north axis versus the west-east axis indicated by Abraham's tent being pitched between Bethel and Ai). This suggests that for some of Abraham's descendants the sacred center was not always identified with shrine cities.

North of both Ramah and Bethel was the shrine city of Hazor. Tel Hazor was located north of the Sea of Galilee, between Ramah and Kadesh. It was set on a hill overlooking Lake Merom. Hazor had Middle and Late Bronze Age (2000-1200 B.C.) temples, palaces, and fortifications. It was a significant early city of Israel with an upper tell of 30 acres and a lower city of more than 175 acres. Besides Lake Merom, Hazor had a water supply system typical of other shrine cities such as Jerusalem, Petra and Beersheba.

Hazor was the administrative center of an ancient territory. This is attested in Joshua 11:10: "Hazor in olden days was the capital of all these kingdoms." Grain and other commodities were brought as tribute to Hazor and were stored there. Excavations have uncovered huge storage facilities there. These and tunnels to the subterranean water pits testify to the importance of the city.

Hazor is mentioned in 14th century BC diplomatic correspondence between the Egyptian administration and its representatives in Canaan and Amurru (Amorites) during the New Kingdom. These are called the Amarna Letters. Hazor is also mentioned in earlier Execration texts, and in 18th century BC documents found in Mari on the Euphrates River.

From the Upper Egyptian Amarna letters come evidence that the king of Hazor was under the rule of the Egyptian Pharaoh. Other rulers mentioned in the Letters include Lib'ayu of the shrine city of Shechem and Abdi-Heba who ruled in the shrine city of Jerusalem in the mid-1330s BC. Abdi-Heba hired some Apiru/Habiru (Hebrew) to serve as mercenaries. Among the Habiru were clans known for their skill in spying and combat. Others were known for their skill in metal work some of which was done at the shrine cities since these had sufficient water, and metal articles such as jewelry, mirrors, tools, weapons and sacred vessels were crafted for the rulers.

Hazor was destroyed by a large fire between 1400 and 1100 BC. Fourteen massive jars of scorched 3,400 year-old wheat have been found in a Late Bronze Age palace at Hazor. Scholars do not agree on the cause of the fire. Israeli Archaeologist Amnon Tor-Ben believes that the Israelites conquered Hazor and burned it as described in Joshua 11:11- "None of the cities that stood on mounds did Israel burn, except Hazor only; that Joshua burned." The book of Joshua contradicts itself on this matter, Joshua 6:24 credits Joshua with burning Jericho, and Joshua 8:28 reports that he also burned Ai.


It is also possible that Hazor was burned by the Egyptians with the help of Horite warriors such as Joshua and Caleb. Seti I claimed to have destroyed Hazor in a military campaign around 1300 BC. It is possible that Horite warriors were among Seti's destroyers of Hazor and memory of the event came into the Hebrew Bible from them.

It seems doubtful that the Habiru would have burned Hazor on their own initiative since the king of Hazor was friendly to the Habiru as evidenced by Amarna document EA 148 (Cairo Museum Cat. Number 4765, ca. 1400-1100 BC).

There may be a natural explanation for the fire that destroyed Hazor. In the ancient world fires broke out in shrine cities due to granary explosions. This was one of the risks of storing large amounts of grain offered as tribute. However, this would not explain the apparent willful destruction of the teraphim.

The most important of the southern shrines was Beersheba, inhabited from at least 4000 BC. The shrine is named after the well of Sheba, a huge cistern carved out of the rock beneath the town. There were numerous wells in the area due to the abundance of underground water. Beersheba had separate areas for the ruler and his soldiers, a commercial center, and housing for the average citizens. Sophisticated metal work was being done in the area and the patron of the metal workers was Hathor-Meri, the virgin mother of Horus.

Replica of altar found at Beersheba

Beersheba is mentioned as a holy place in the patriarchal narratives. Archaeologists have found Edomite and Midianite pottery here which indicates that these related peoples lived here together at different times throughout the Iron Age. A four-horned brazen altar identical in structure to the altar used later by the Israelites was uncovered in 1973. This discovery was made by a team under the direction of Yohanan Aharoni and Ze'ev Herzog of Tel Aviv University.

The horned altar and the mercy seat of the Ark are apophatic representations of the presence of the Creator whose emblem was the Sun. The ancient Horites never worshiped the sun. The Creator and the sun were viewed as distinct since the Lord created a tent for the sun. The negative orb-shaped space is evidence that Israel repudiated earthly representations of the Creator. This likely emerged as the devotees of Horus (Horites) sought to separate themselves from the idolatry of the syncretistic Egyptians and Babylonians.

Abraham's second wife was Keturah who lived at Beersheba. Their firstborn son was Joktan (Yaqtan). Beersheba is where Abraham spent the last years of his life. Josephus calls the descendants of Abraham by Keturah "Horites" and, quoting an ancient historian, speaks of them as "conquerors of Egypt and founders of the Assyrian Empire." The oldest Horite shrine city is Nekhen (Heirakonpolis) in Sudan.

The Egyptian word her (hor, har) means "the one on high", a reference to the soaring falcon, Horus' animal totem, and to the Sun as the emblem of Ra, Horus' father. Horus was the principal deity at Egypt's earliest shrines, and he was the patron of the Nekhen monarchy from which the pharaonic state emerged. Horus and Ra were the first known national gods of the Egyptians and their Proto-Saharan ancestors. Their ruler-priest devotees are called Horites (Horim).

Archaeological discoveries indicate that Beersheba was from the earliest time associated with a ruler class. This explains the discovery of crowns, specters, and objects of ivory and copper of exquisite craftsmanship. It also may explain why Sheba defied David's rule, hoping to make himself king (2 Samuel 20:1–22).


Related reading: Sphinx Statue Discovered at Hazor; The Men Who Spied on Canaan; Jacob Leaves Beersheba; The Saharan Antecedents of  Pharaonic Egypt; 7000 BC Horse Burial Linked to Sheba; Is Ne-Hesi Related the to Name Na-Hor?; Scientific Verification of the Genesis 10 Dispersion