The Rooster in Biblical Symbolism 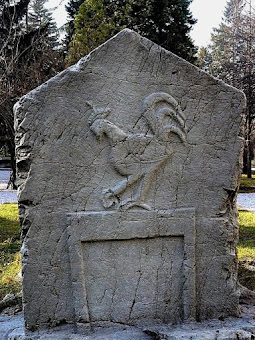 Grave marker with rooster over the empty tomb, Serbia.
Alice C. Linsley
The rooster, cockerel or cock is a male gallinaceous bird, usually a male chicken. In Christian tradition, the rooster symbolizes a sinner's acceptance of divine pardon through Jesus Christ, and the hope of bodily resurrection.

Roosters are often found in tombs. Two red roosters appear with a cross over the center of the arch in the Christian "Tomb of the Cocks" in Beit Jibrin, located 13 miles northwest of Hebron.

The rooster appears in the catacombs of Rome. Below is an example. This 3rd-century fresco of Jesus Christ was found in the Catacomb of Callixtus. It portrays Jesus as the Good Shepherd and there is a rooster at his feet. 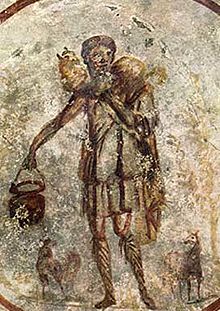 In the Gospel of Matthew, Jesus tells the disciples that they will all fall away from Him because of the events that would lead up to His death. Immediately, “Peter answered him, “Though they all fall away because of you, I will never fall away.” Jesus said to him, “Truly, I tell you, this very night, before the rooster crows, you will deny me three times.” Peter said to him, “Even if I must die with you, I will not deny you!” And all the disciples said the same.” (Matthew 26:33–35)


Peter did indeed deny any relationship to Jesus three times. “Now Peter was sitting outside in the courtyard. And a servant girl came up to him and said, “You also were with Jesus the Galilean.” But he denied it before them all, saying, “I do not know what you mean.” And when he went out to the entrance, another servant girl saw him, and she said to the bystanders, “This man was with Jesus of Nazareth.” And again he denied it with an oath: “I do not know the man.”After a little while the bystanders came up and said to Peter, “Certainly you too are one of them, for your accent betrays you.” Then he began to invoke a curse on himself and to swear, “I do not know the man.” And immediately the rooster crowed. And Peter remembered the saying of Jesus, “Before the rooster crows, you will deny me three times.” And he went out and wept bitterly.” (Matthew 26:69–75)

Peter was a broken man who repented and experienced grace. The message is powerful: God's pardon extends to sinners who repent. Repentance often is expressed in emotional distress, in a broken spirit. The account of Peter’s denial of Christ and the rooster crowing is recorded in all four gospels.

In De Ordine, Augustine, Bishop of Hippo, described the rooster as follows: "in every motion of these animals unendowed with reason there was nothing ungraceful since, of course, another higher reason was guiding everything they did."

The Khasi people sacrifice a rooster as a substitute for man, because they believe that the cock when sacrificed "bears the sins of the man." There seems to be a similar idea in Judaism.

The Hebrew word gever means both "man" and "rooster" so punishment of the rooster can be substituted for that of a person who deserves punishment. Kapparot is practiced by some Jews shortly before Yom Kippur. First, selections from Isaiah 11:9, Psalms 107:10, 14, and 17-21, and Job 33:23-24 are recited; then a rooster (for a male) or a hen (for a female) is held above the person's head and swung in a circle three times, while the following is spoken: "This is my exchange, my substitute, my atonement; this rooster (or hen) shall go to its death, but I shall go to a good, long life, and to peace."

In the Yoruba creation story the rooster serves the Creator by scratching out the dirt to form the dry land. The rooster might be seen as a Christ symbol since Christians believe that all things were made through Christ.

The rooster is an archaic symbol. Before the birth of Jesus Christ, the rooster was associated with the sun, the symbol of the Creator, because it crows before dawn. In this sense, the rooster was a solar symbol, and consistent with the received tradition of Abraham's ancestors, it portrayed the Creator as have masculine attributes.

At Sun shrines in Japan roosters freely roam the grounds.

The association of the rooster with light may explain why some clay oil lamps had rooster images. This oil lamp with a rooster was found in North Africa and dates to the 3rd century A.D. 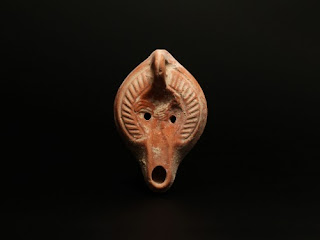 Many churches in Europe have a rooster on top of their steeples. This is true for both Protestant and Roman Catholic churches. For Roman Catholics the rooster symbolizes Saint Peter, who is regarded as the first Pope. 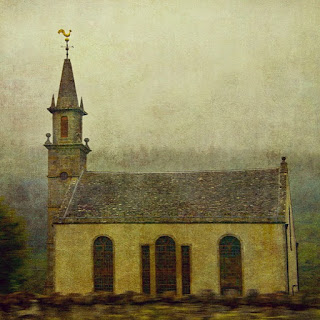 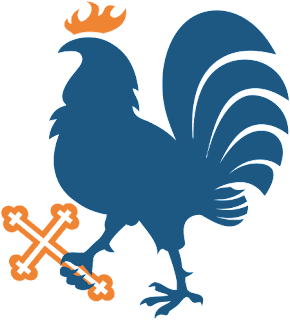 It is common to see carved roosters on the top of wooden churches in Norway. Most of the older churches in the Netherlands have weather vanes that are golden roosters. The golden rooster is said to be a symbol of Jesus Christ who breaks the power of the darkness, brings forgiveness of sins, and announces a new day by the power of His resurrection.
The rooster in northern cultures is like the baboon in Nilotic cultures. The rooster crows to announce the rising of the Sun and the baboon barks and yaks to announce the rising of the Sun.

Some churches use the rooster as their logo. The image to the right is the logo for a church in Manhattan.


Related reading: Celestial Horses; Ram Symbolism of the Ancient World; The Ostrich in Biblical Symbolism; Dogs in the Bible; The Red Heifer; The Fatted Calf; Why Cows Were Sacred in the Ancient World; Elephants in the Time of Abraham; Abraham's Camels; Noah's Birds; The Lion and Judah; Jesus: From Lamb to Ram