Clay (terracotta) seals called "bullae" were used to secure official documents from the Stone Age through the Roman Period. Here are some examples dating from the 1st century B.C. through the 2 century A.D. 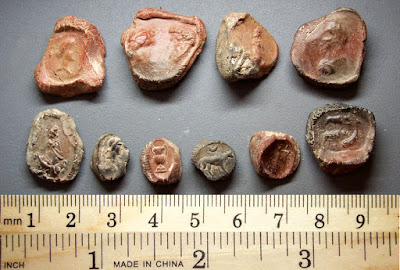 Clay seals were used to secure documents by the personal authority of an official or a king. These seals were created by the impression of a signet on a lump of clay. A rolled papyrus or parchment document was tied with a cord and the cord was sealed with the piece of clay bearing the impression.

Sometimes the clay seals have the imprint of the maker's fingers and fibers from the papyrus cords that were wrapped around the documents.

In 2014 a 10-year-old Russian boy found a 3000 year seal while sifting through dirt at Jerusalem's Temple Mount. The limestone seal bears the image of an animal, likely the totem of the family to which it belonged.