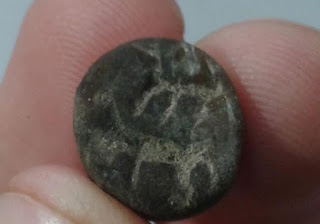 In 2014, Matvei Tcepliaev, a 10-year-old Russian tourist, volunteered to sift through dirt at Jerusalem’s Temple Mount and found this 3000 year seal. The limestone seal bears the image of an animal, likely the totem of the family to which it belonged.

Ancient clay seals (called bullae) were used to secure documents by the personal authority of an official or a king. These seals were created by the impression of a signet on a lump of clay. A rolled papyrus or parchment document was tied with a cord and the cord was sealed with the piece of clay bearing the impression.


Dr. Gabriel Barkay, co-founder and director of the project, explained that this discovery is significant because it originated from the Temple Mount itself. Only one other Iron Age II seal of this peculiar style has been found in Jerusalem. It was found by archaeologist Eilat Mazar in the Ophel, the area between the City of David and the Temple Mount.

1 Chronicles 27:3 says that King Jotham “did much building on the wall of the Ophel” in the mid-8th century B.C., and the site’s history stretches back well before this construction. The root of the word ophel is OP and pertains to a complex of interrelated ideas: seeing (optic); armed guards (opiltes); walled towns (oppida), and sun shrines (O'piru) served by a priest caste known in the ancient world as Ha'piru, Ha'biru (Hebrew) and 'Apiru.

The Sifting Project at Jerusalem Temple Mount is run by Bar-Ilan University and the City of David Foundation. Tourists are invited to help comb through the 400 truckloads of dirt dumped in a valley outside the Old City of Jerusalem in 1999 by the Islamic trust.

Volunteers have also discovered hundreds of 10th century B.C. pottery sherds and a rare bronze arrowhead believed to be from the same period.