The Pillars of the Earth


When I select an appointed time, It is I who judge with equity. The earth and all who dwell in it melt; It is I who have firmly set its pillars. Selah (Psalm 75:2,3)

A central experience of the archaic peoples who lived along the Nile was the Nile inundation. As rains fell in the Ethiopian headlands the Nile River rose above its banks, flooding the Nile Valley between June and October. This water flowed also into adjoining rivers and lakes, creating a vast wet region that extended well toward the Chad basin.

New evidence indicates that the Nile's famous floods spread nearly 100 miles west of the river and created "mega-lakes" in what is today the Sahara. Hydrological studies have verified that it was possible to go by boat from the Nile to the Atlantic coast of Nigeria along the interconnected lakes and rivers shown below in gray.


A great deal of the water systems were along the African Sheer Zone where rifting, combined with prolonged rains, caused flooding. This is the likely location of the great flood associated with Noah, a Proto-Saharan ruler who lived near Lake Chad. Between 12 and 10 thousand years ago, the Nile connected to the Chadic and Niger water systems through a series of shallow lakes. This explains the common plant and animal species found in all three water systems.

The flooding of the Nile valley lasted for 40 days and 40 nights. As the waters receded, the highest mounds would been seen at first. Even after the waters crested and began to recede, families did not return to their homes for another 40 nights. This is the origin of the phrase "forty days and forty nights" and the context is Nilotic, reflecting the Nilotic roots of many of Abraham's archaic ancestors.

These ancestors were acutely aware of natural processes and regarded these to be the work of the Creator. One such process involved the creation of dry land from volcanic eruptions.


The young earth had many active volcanoes. Some were above the surface (extrusive) and others were beneath the surface (instrusive). Many volcanic eruptions took place under the sea. According to Genesis 1 God separated the dry land from the sea as one of the first acts of creation. We can imagine a great sea with steam rising from deep underwater fissures in the earth. Now imagine volcanoes rising up from the sea. These are the "pillars of the earth" described in Job 9:6 which says, "Who shakes the earth out of its place, and its pillars tremble." These are called God's pillars according to I Samuel 2:8 - "For the pillars of the earth are the Lord’s and he had set the world upon them."

Among Abraham's Nilotic ancestors the original volcanic mound that emerged from the sea was called TaTJaNuN which means the "pillars of God in the water." Pillars were used to mark sacred places, to hold up the roofs of royal tombs, and to mark the entrances to royal buildings such as palaces, treasuries, and temples.

Steering between twin volcanic pillars is like going through an entrance. In the ancient world twin pillars marked the entrance to palaces and temples. The twin pillars at the entrance to Solomon's temple were named in honor of his paternal and maternal great great grandfathers Boaz and Joachin. Plato (427-347 BC) wrote of the pillars of Hercules as the passageway between the Mediterranean and the Atlantic.

In the Ugaritic creation story the two mountains likewise are indicated by the sign T. The mountains trgzz and trmg emerged from a universal ocean and held up the firmament. They also marked the entrance to the underworld. So the phrase "pillars of heaven" and "pillars of earth" refer to the work of the Creator whereby the heavens and the earth are connected.

The Latin word for door is ianua. Before it was a letter of the alphabet, the i was likely a pillar sign. That is supported by the fact that the shrine city of On (Gen. 41:45) was known as iunu, meaning place of pillars. Iunu was called Heliopolis by the Greeks because the pillared shrines and temples were dedicated to the Creator Ra, whose emblem was the sun. Many obelisks were erected there that represented the original creation mound. These were aligned to the solar arc. These obelisks are mentioned in Jeremiah 43:13.

During the Archaic period (10,000 - 3000 BC) the Nile floods were catastrophic when the chaotic waters raged over the natural shorelines. The loss of life and property would have been great since the population was most dense along the water ways. This collective memory stands behind the Genesis description of Tehom, the chaotic "deep" that covered the whole earth before the Creator separated land and sea through volcanism. By the divine Word, the Creator subdued the raging water and set boundaries. The Tehom was subdued by the God of Wisdom, by Tehut. 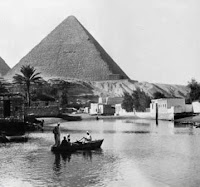 The victory of Tehut over Tehom relates to the annual inundation of the Nile and helps us to understand the Nilotic concept of creation, one of the oldest creation myths. According to this narrative the first land was a mound that emerged from the waters of a universal ocean. In Hindu mythology the mound that emerged is called Meru. It emerged from the center of the cosmic ocean.

This aligns with the Biblical description of the Creator's separation of the land from the sea in Genesis 1: Then God said, "Let the waters below the heavens be gathered into one place, and let the dry land appear"; and it was so. God called the dry land earth, and the gathered waters He called sea; and God saw that it was good." Note that the Hebrew speaks of land and sea, not lands and seas.

Here we find a scientifically realistic scenario, given what is known about early geologic time before a supercontinent began to break apart about 200 million years ago due to plate tectonics.


Related reading: The Pillars of Solomon's Temple; Sacred Mountains and Pillars; The Pillars and Mummies of Takla Makan; The Kushite-Kushan Connection