“… For they drank from the spiritual rock that followed them, and the rock was Christ.”
—1 Corinthians 10:4

Paul knew the tradition of his Horite Hebrew ancestors so well that he recognized Jesus Christ in passages of the Old testament that other people might miss. This is an example. Paul sees Christ as both the rock and the source of water. Christ follows the people through the wilderness as a shepherd follows his flock to make sure that none is lost.

Some think that this narrative about the moving rock is nonsense, but scientists have found "walking" rocks in different parts of the world. Usually these are in desert areas where there is underground water or dried lake beds. The underground water acts as a lubricant that makes things move on the surface when there is geological movement such as an earthquake or a small tremor. 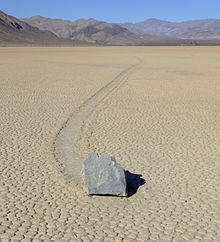 Moving rocks have been found in Death Valley which was once a lake. There is still movement from the ancient lake bed. The first to photograph the moving stones of Death Valley were Richard Norris, a paleobiologist at Scripps Institution of Oceanography, and his cousin James Norris, a research engineer. Their 2013 photos provided proof that rocks move across flat dry dirt under certain conditions. Some rocks weigh more than 600 pounds and they leave "wiggle" trails in the earth like that shown in this photo of a sailing stone in Racetrack Playa.

Here are two of the rounded boulders found in the Atacama Desert in Chile. These boulders fell from the cliffs of distant mountains, likely dislodged during an earthquake. 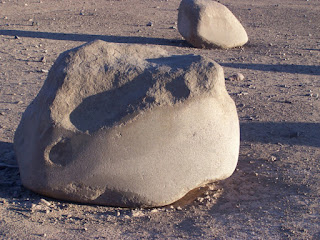 Watch this video for further explanation.

The same conditions which move stones can move bones also. In July 2013 movement was noted of cattle skeletal remains across the surface of Smith Creek Valley Playa, in central Nevada.