The Men Who Spied on Canaan 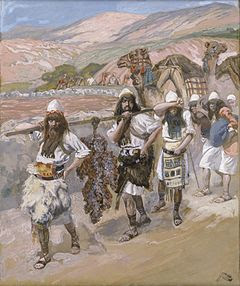 
Numbers 13:4-16 gives the names of the spies sent by the Moses the Horite to the land of Canaan. These were given the mission to go into the Negev and into the mountains to investigate the land, its inhabitants and their wealth. Their journey was north from Kadesh-Barnea to Hebron, a distance of about 75 miles.

Each member of the spy team is called a "leading man." The first six names indicate prominent elders among the people in Egypt and each has a connection to the Horite Hebrew ruler-priest caste. The last six names appear to be synthetic and do not appear to reflect historical persons.

These are the names of the spies:

....from the tribe of Reuben, Sham-mua son (ben) of Zakkur

Sham (Shams in Arabic) refers to the Sun. A variant spelling is Shamma, one of David's three great champions. This Shamma was the son of Elah the Horite (II Sam. 23:11). He was known as a great warrior. Mua is a common name in Arabic and Aramaic (likely the original language of the material collected in the Qur'an).

Zakkur is a name associated with a West Semitic prophet (See Zakkur Stela).

From this information we might infer that Shammua was a religious leader associated with the Sun, the Horite symbol for the Creator. He belonged to a family of prophets and warriors.

5 from the tribe of Simeon, Shaphat son (ben) of Hori

Hori refers to the Horites, a Hebrew caste or ruler-priests. Shaphat is a name associated with the divine council described in Psalm 82:1-6. They are called elohiym (deified rulers), and in Psalm 72 they are called shaphat.

Psalm 82:1-2 - "God presides in the great assembly; he gives judgment among the gods [rulers]. How long will you judge unjustly, And show partiality to the wicked? Selah.”

From this information we might infer that Shaphat was a Horite ruler. His connection to the tribe of Levi would reinforce this, as the Horites were a caste of ruler-priests, devotees of the high God Ra and his son Horus. Horus means "One on high" and he was said to be conceived when his mother Hathor was divinely overshadowed (cf. Gen. 3:15; Luke 1).

6 from the tribe of Judah,Caleb son (ben) of Jephunneh

Jephunneh יְפֻנֶּה means "for whom a way is prepared." Jephunneh was a descendant of Kain which is why he was called a ‘Kenizzite’ הַקְּנִזּי haKenizi (cf. Gen. 15:19). The Kenizzites were a Horite clan according to Gen. 36:11 - "And the sons of Eliphaz were Teman, Omar, Zepho, Gatam, and Kenaz.” Caleb's connection to the Kenites is explictly stated in 1 Chronicles 2:55 which says that Caleb's sons were Kenites. Kenaz was a son of Eliphaz by Timna, daughter of Seir, a Horite Hebrew ruler.

The dog was the totem of Caleb’s clan. This was a symbol of the warrior. The Hebrew word for warrior is Gid'on (Gideon). This allusion to the dog clan is found in Judges 7:4-7:

But the Lord said to Gideon, "There are still too many men. Take them down to the water, and I will sift them for you there. If I say, 'This one shall go with you, he shall go; but if I say, this one shall not go with you, he shall not go." So Gideon took the men down to the water. There the Lord told him, "Separate those who lap the water with their tongues like a dog from those who kneel down to drink." Three hundred men lapped with their hands to their mouths. All the rest got down on their knees to drink. The Lord said to Gideon, "With the 300 men that lapped I will save you and give the Midianites into your hands. Let all the other men go, each to his own place.


Based on this information, it is possible to trace Gideon’s ancestry back to Caleb whose Horite wife was Ephrathah. I Chronicles 2:50 tells us that the firstborn son of Caleb and Ephrathah was Hur (Horus in Greek). Hur’s firstborn son was Shobal, the founder of Kiriath-jearim where the Ark resided until it was moved to Jerusalem in David’s time. Shobal was a Horite chief and his totem was the lion.

One of Caleb's grandsons was named Korah (I Chron. 2:43), which refers to the Horite priesthood. Moses' half-brother was Korah. The name means "shaved one" as Horite priests shaved their bodies before their terms of service.

From this information we may infer that Caleb also was associated with the Horites. His family settled in Bethlehem, a Horite settlement. Caleb's son Salma is designated the "founder" of Bethlehem in I Chronicles 2:51.

7 from the tribe of Issachar, Igal son (ben) of Joseph

Igal is also spelled Yigal and means "He redeems." A later hero by this name was listed among David's thirty champions in II Samuel 24:36. The name Joseph is a common name among the Horites. Joseph, son of Jacob, married Asenath, the daughter of the priest of the Horite shrine at Heliopolis (Onn). Joseph who married the Virgin Mary was a descendant of these ruler-priests. According to Matthew 1:15, Joseph was of the priestly line of Mattai (Matthan/Matthew). Luke 2 tells us that Joseph was to register for the census in Bethlehem which was originally a Horite settlement.

from the tribe of Ephraim, Joshua son (bin) of Nun

Joshua is said to have lived to the ripe age of 110 (Judges 2:9). He was buried at Timnah of Horus in Ephraim.

In this list of spies everyone is referred to as “so-and-so ben (son of) so-and-so,” except for Joshua. He is called Joshua bin Nun, using a non-Hebrew word for son. The explanations given by rabbis for this curiosity are fanciful rather than historical. Here are some examples:

Rabbi Moshe ben Nachman (1195–1270) suggests that the bin Nun should be read together as “binnun.” The word is related to the Hebrew word binah, meaning “the understanding one.”

The Torah tells us that Joshua was Moses’ prize student. Exodus 33:11 says, “His attendant, Joshua bin Nun, a lad, would not depart from the tent.” The bin is suggested as an explanation of Joshua' dual parentage: he was Nun’s biological child, but he was Moses' son by training.

Rabbi Moses Sofer (1762–1839) offers this explanation. According to the Midrash (Bereishit Rabbah 47), when G‑d changed Sarai’s name to Sarah, the Hebrew letter yud was removed from the holy woman's name and felt wronged. G‑d placated the letter by promising to make amends at a future date. This was accomplished when Moses added the letter yud to Joshua’s name (Yehoshua), which was originally Hoshea. This explanation does not however, explain the appearance of the Arabic word for son. So the following explanation was offered by Rabbi Baruch S. Davidson.

In its original state, when it was the final letter of Sarai’s name, the yud did not have a vowel—as is the case with most letters which come at the end of a Hebrew word or name. Now, in order to be the yud which begins the name Joshua, it would need the sheva vowel, which is comprised of two dots vertically aligned. These two dots were “borrowed” from the segol vowel which normally is beneath the word ben, which is three dots set up as a triangle. This leaves only one dot for the word ben. One dot is the chirik vowel, which changes the pronunciation to “bin.”


The name Joshua is Yeshua (Jesus).In Numbers 13:16, Moses changed Joshua's name to Hoshea. Why this change was made is uncertain since the names are linguistically equivalent. Probably this is a late gloss on the text. Both are variants of one original name meaning "the Lord saves."

The most historically accurate interpretation of Joshua bin Nun rest in examination of the word Nun. Nun is found at the Horite shrine of Heliopolis in Egypt and represents the cosmic waters which are separated into the firmament above and firmament below (Gen.1:6). In Heliopolitan cosmogony the two watery realms were connected by the great pillars of the temple of Heliopolis.

Deified rulers were shown as the pillars holding up the watery firmament. In the temple of Ramesses II at Abu Simbel in Nubia the pillars are in the form of massive statues of the king. Nefertari is also shown on a pillar. Abu Simbel was a temple dedicated to Hathor, the virgin queen mother of Horus.

This conception of the ordering and control of cosmic water originated in the Nile region where stone pillars and mounds of earth were erected. In the Lower Nile small pyramids were carved from a single block of stone. These were known as a bnbn, from the root, bn, meaning to "swell forth" or to "come forth" and this is the likely meaning of the tern bin (bn) in reference to Joshua's descent.

9 from the tribe of Benjamin, Palti son (ben) of Raphu

The name Raphu is Rafu in the Abydos King Listand is a reference to Ra, the Creator and father of Horus. Palti is also spelled Paltiel. The name refers to a noble family as is evident in Saul decision to give his princess daughter Michal to Palti the son of Laish (I Sam. 25:44). In doing so, Saul was likely showing favor to a fellow tribesman.

The first six names have connections to historical persons and extant texts. However, from this point on the names appear to be synthetically constructed to make up the balance of 12 tribes.

10 from the tribe of Zebulun, Gaddiel son of Sodi

Gaddiel (or Gadiel in Arabic) likely means warrior of God. The -iel refers to God and gid'on means warrior. This is the only place where the name Sodi is found in the Bible.

11 from the tribe of Manasseh, Gaddi son of Susi

These names are suspiciously like the names Gaddi and Sodi, so one wonders if this might be a replication from a different source. Susi appears to be a variant of the Akkadian Susinak.

12 from the tribe of Dan, Ammiel son of Gemalli

Ammiel means "people of God" and Gemalli appear to be a compound of g-m-al, which means "God gathers." The suggestion is that God gathers his people appealed to the author, but this does not appear to have an historical reference.

13from the tribe of Asher, Sethur son of Michael

Seth is combined with Ur, both ancient names in the Afro-Asiatic Dominion of Abraham' s ancestors. Michael means “the one who is as God."  The oldest reference to the name Michael is in the book of Daniel (8:16, 10:13) which dates long after the time of Moses and the spies. In Jewish tradition, the Archangel Michael was said to have destroyed the city of Babylon.

In some Bibles this is rendered: Nahabi the son of Vapsi. Nahbi appears to relate to the word for prophet, נְבִיא (nabi). Vophsi or Vapsi does not appear to have an historical reference.

15from the tribe of Gad, Geuel son of Maki

The names Geuel and Maki (Machi) are found only here and do not appear to have an historical reference.

Given this information it appears that the spies sent by Moses were his Horite kinsmen. Given that only six of the names can be verified as historical it is possible that only six spies were sent. If Moses sent only six spies, they most likely would have gone in three teams of two. This would explain why Joshua sent two spies into Jericho (Joshua 2:1 and 8). The Horites were particularly fond of the numbers 2 and 3.