The Judges Deborah, Samuel and Huldah


When it comes to Samuel and Deborah, the place called Ramah always comes up. These two judges share Ramah as a point of reference. The region of Ramah-Dedan-Sheba was ruled by Ramah, the Kushite grandson of Noah. His brother Nimrod ruled in the Tigris-Euphrates valley. Kush and his sons Ramah and Nimrod ruled between BC 2417-2215. Sheba and Dedan were the ruling sons of Ramah, each ruling over his own region in Arabia. Dedan controlled the eastern coastline of the Reed Sea (Yam Suph). 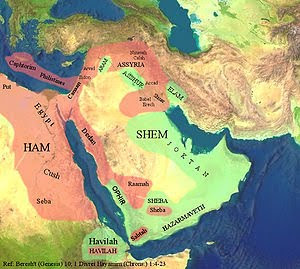 Judges 4:4-6 tells us, “Deborah, the wife of Lappidoth, was a prophet who was judging Israel at that time. She would sit under the Palm of Deborah, between Ramah and Bethel in the hill country of Ephraim, and the Israelites would go to her for judgment."

Though Deborah had great authority, she didn’t rule over all of Israel. She lived before the monarchy in Israel, a time which according to the book of Judges, had at least a dozen judges: Othniel, Ehud, Shamgar, Deborah, Gideon, Tola, Jain, Jephthah, Ibzan, Elon, Abdon and Samson. Though they are presented in what appears to be chronological order, some of these judges were contemporaries, each with his or her tribal jurisdictions.

Deborah's duties would have been like those of other judges. She helped to settle disputes, gave direction to people from God, and upheld the religious traditions of her Horim (Horite Hebrew ancestors). She also deliberated about and launched a counterattack against her enemy Jabin of Hazor and his military commander Sisera. Afterwards, the land had peace for forty years under Deborah's rule, according to Judges 4 and 5.

Deborah's Palm was halfway between Ramah (high of lifted up) and Bethel (House of God). Ramah and Bethel are on a north-south axis. Mircea Eliade, a Romanian sociologist of religion, wrote about the significance of the sacred center in his book "Cosmos and History: The Myth of the Eternal Return." Archaic cultures regarded their most sacred places as the center of the cosmos. The ancient Incas regarded Cuzco as the "ombligo" or "omphalos" (navel) of the earth. In the Psalms, Mount Zion is portrayed as the sacred center to which all the peoples would come to worship.

The sacred center or cosmic axis is the place of connection between God and Man, between Heaven and Earth. It is where the four compass directions meet. That is the significance of the north-south axis for Deborah and the east-west axis for Abraham. Abraham set up his tent at the the moreh's tree (the prophet's oak) between Bethel and Ai, on an east-west axis. (Gen. 18)  Here God visited Abraham and Abraham deliberated with the Lord about the fate of Sodom and Gomorrah. Here Abraham received the promise that Sarah would bring forth a son. So Abraham, like Deborah, deliberated with the Lord as a judge and prophet at the sacred center marked by a sacred tree.

In many Bibles, oak tree is rendered as terebinth, which is the word that appears in Hebrew. This might indicate the Pistacia terebinthus, also called turpentine tree, a small deciduous tree related to the pistachio and the earliest known source of turpentine. However, it is more likely that in the original telling of this story, terebinth meant the "tree of the priest's the daughter." In Arabic bint (بنت) means "daughter of" and tera is an ancient Ainu word for priest.  All the leading figures of the Pentateuch met their future wives at wells or river shrines maintained by priests.  In the more arid Palestine, the trees were at oases.

Caesarius of Arles explains that since Isaac, Jacob and Moses are all types of Jesus Christ, "for this reason they found their wives at wells, because Christ was to find His church at the waters of baptism." (Sermon 88:1) The church is symbolized by Photini, the Samaritan Woman at Jacob's Well, who asked the Lord for the Living Water.

In Africa and Arabia, the fronds of Tamars (date nut palms) are cut and used at the installation of a sovereign or a priest of high rank. This is the custom that stands behind the greeting of Jesus as he entered Jerusalem on Palm Sunday. Other trees are also regarded as having sacred uses, such as the Cotton Tree and the Baobab. Jude Adebo Adeleye Ogunade writes in his memoir about growing up Ijebu. He was warned not to touch the leaves of the Igi-Ose tree, because as his Mama Eleni explained: "That tree is the tree whose leaves are used to install Chiefs and Kings of Ijebu and as your grandfather was a custodian of the rites of chieftaincy and kingship you must not play with its leaves."

Ramah is where the prophet Samuel resided. The word Ramah is associated with the oldest priestly lines. The root is RM. One of Shem's sons was named A'ram (Gen. 10:22) and the priestly lines of Aaron and his half-brother Korah are traced through their Horite priest father Am'ram. David was of the priestly line of Ram. (Ruth 4:19) Samuel was the son of the priest Elkanah. Elkanah had 2 wives, Hannah and Peninnah (1 Samuel 1:2), as was the custom for Horite priests.

The elders of Israel came to Ramah to demand that Samuel appoint a king to rule over them. David fled to Ramah for Samuel's help when Saul sought his life.

The ancient priesthood was associated with the number seven. The number seven is the Priestly Writer's tag in the book of Genesis. God created in six days and rested on the seventh. God commanded Noah to take seven pairs of clean animals (as contrasted with the other version in which he takes only one set). Jeremiah warned that the priests of Israel would not be spared. “The mother of seven will grow faint and breathe her last. She will die, ashamed and humiliated, while it is still daylight” (Jeremiah 15:9).

In ancient Israel, seven sons was as a proverbial expression to describe a family whose future in Israel was guaranteed, but often only one son was born, and this foreshadows the Son of God. When Hannah miraculously conceived and gave birth to Samuel, she said: “The barren has borne seven” (1 Samuel 2:5). After Ruth married Boaz and gave birth to Obed, the women of Bethlehem acclaimed the Moabite mother, telling Naomi that Ruth was better “than seven sons.” (Ruth 4:15)


Huldah, a Judge in Israel

Not all prophets lived at well or oases. Some lived in cities.  II Kings 22:14 reports that King Asaiah sent his priests to consult the “prophetess” Huldah. Her name indicates that she belonged to the tribe of Hul, a son of Aram (Gen. 10:23). Huldah, who lived approximately 655 years after Deborah, resided in Jerusalem, in the "new section." Jerusalem, which was called "Urusalim" in Akkadian, was an important shrine city in David's time, exhibiting typical characteristics of ancient shrine cities. It had flowing water from a perennial spring and was built on a precipice, as was the shrine city Nekhen at El-Kab on the eastern bank of the Nile in Sudan. The region around Amman in Jordan (Gen. 36:35) was likewise famed for its springs and high citadel. By Huldah's time, Jerusalem had expanded and the temple precinct was regarded as the sacred center.