Bronze figure of a blacksmith (7th-8th century B.C.) was discovered by a farmer in Vranište, Serbia. 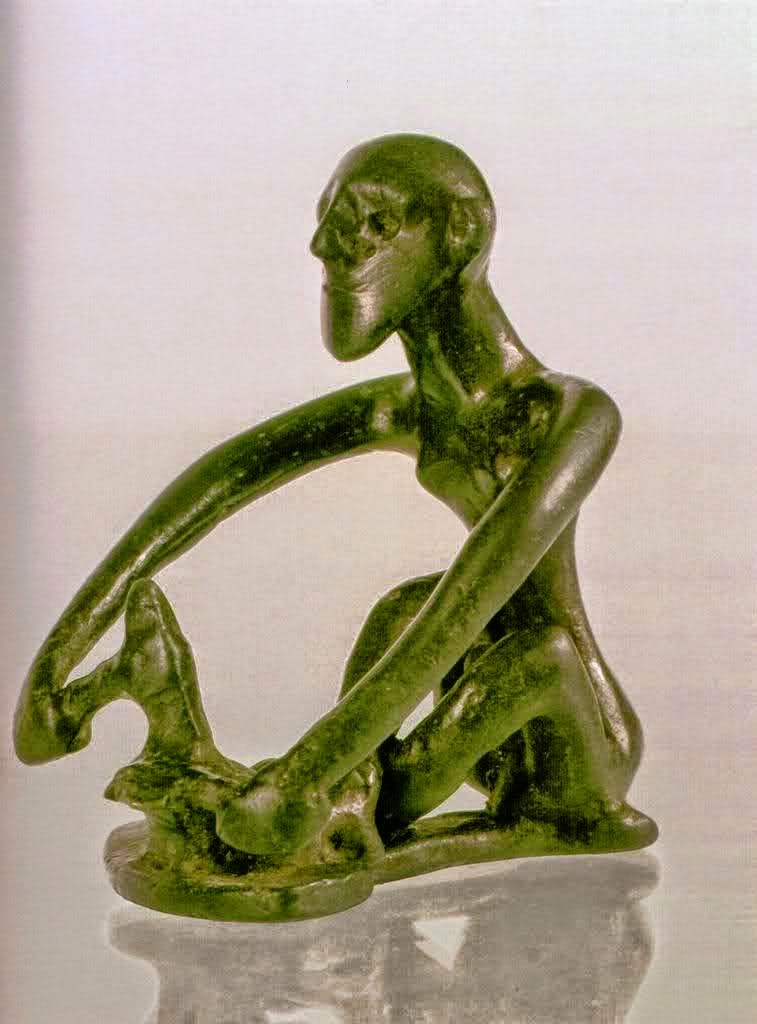 Vran in Serbian means black. The Irish equivalent is bran. This figure is likely proto-Celtic and the reference to "black" smith may pertain to more than the soot from the forge. It may be indicate a genetic stock that today is identified as "black Irish." This is haplogroup R1b and the origin is the Nile Valley and Wet Sahara. From the earliest times, populations in the Upper Nile included people of red and black skin.

The Varn smiths worked copper and gold, but they were especially fond of gold because it was associated with divine power. Or/oro are words for gold and are related to the name Horus. Grave 43 from the Varna cemetery, the so called "golden grave" contained more gold than has been found at any other archaeological site from that epoch.

The peoples of Tanais included Khazars, Magyars, and Horites. Their territory in Eastern Ukraine was known as "Red Croatia" and its inhabitants were called "Sarmatian" Horites. These peoples were generally classified as "Scythians" by Herodotus. The Idu of Benin, the Horite Edomites, and the Idumeans of Edom were known for their red skin tone.

The word Tanais and Tanaba are probably related to the Ainu word Tanabe. The Tanabe or Tanobe were a royal caste whose work was to tend the Emperor's rice paddies. The emperor's rice paddies were sacred places, as were the circular threshing floors of the Biblical Horites. In II Samuel 24:18, we read that David built an altar at the threshing floor of the Jebusite chief Araunah. Genetic and linguistic studies have demonstrated a connection between African and Asian rice production, trade, and commercial record keeping.

The Ainu were know to have a reddish skin tone and full beards. There is a connection between the Ainu populations worldwide, whose ancestors originated in the Upper Nile Valley. At Nekhen, the oldest known Horite shrine, the redheaded man in Burial no. 79 had a full beard. The presence of long wavy natural red hair and a full beard suggests that this individual may have been Ainu (Annu). The Ainu were among Abraham's ancestors, and although they were already widely dispersed by Abraham's time, the Nile Valley appears to be their point of origin. The Annu built the original shrine of Heliopolis which is called "Onn" in Genesis 41. Joseph married the daughter of the high priest on Onn.

Horite priests were famous for their metal work. Aaron forged the golden calf, a representation of the youthful Horus, and Moses forged the bronze serpent, a symbol of deliverance and healing. The Horites were devotees of Horus who was called "son" of God. His mother was Hathor who conceived by divine overshadowing. Messianic expectation appears to have originated with their Nilotic ancestors.


Edom was famous for mining. The Horite rulers of Edom were experienced at mining operations. The copper-rich region of the Faynan is in ancient Edom. Mining operations have run here and at Timna in the Negev for 12,000 years. At both sites smelting of the extracted copper has been done since the Chalcolithic period, 4,500 years ago.  A temple dedicated to Hathor was discovered at the southwest edge of Mt. Timna by Professor Beno Rothenberg of Hebrew University. The smelting works, slag and flints at this site were found to be identical to those discovered near Beersheba where Abraham spent much of his time.  In his book Timna, Rothenberg concluded that the peoples living in the area were "partners not only in the work but in the worship of Hathor." (p. 183)

Lidar Sapir-Hen and Erez Ben-Yosef draw a social distinction between the low-class miners and the higher-class smelters: “The people engaged in smelting were actually highly skilled craftspersons and were treated as such. This fundamental observation stems from the inherent complexity of the technology that demanded and created an idiosyncratic class of workers.”