The Priesthood in England - Part 3


This is Part Three of a series on the priesthood in England. You are encouraged to read the entire series. Links to related articles are provided at the bottom of this page.

Oral tradition in Cornwall holds that the ruler-priest Joseph Arimathea came there in connection to mining. Joseph of the venerable (Ar) clan of Matthew (Ar-Mathea) was a mining expert who probably did assessments for the Romans. He may have had relatives and/or Hebrew business associates living in Cornwall and Devon, as evidenced by the many Semitic places names in that region of southern England.

Joseph was a member of the Sanhedrin, a council of ruling priests. In the ancient world, ruler-priests were responsible for metal work, surface and tunnel mining operations, and the construction of royal tombs.


No one knows when surface mining began in Cornwall and Devon, but it was well before 2150 B.C. Tin ore was mined in Cornwall as early as the Bronze age. Dolcoath dates from the late 1500's, but Ding Dong, with its proximity to the Nine maidens stone circle, is considered one of the oldest mines in Cornwall. An old miner told A. K. Hamilton Jenkin in the early 1940's: "Why, they do say there's only one mine in Cornwall older than Dolcoath, and that's Ding Dong, which was worked before the time of Jesus Christ." (Hamilton Jenkin, A. K. Cornwall and its People. London: J. M. Dent; p. 347)

Christopher Hawkins wrote a book titled Observations on the Tin Trade of the Ancients in Cornwall (1811) in which he noted that Cornwall was visited by metal traders from the eastern Mediterranean. One of those metal traders was Joseph of Arimathea. 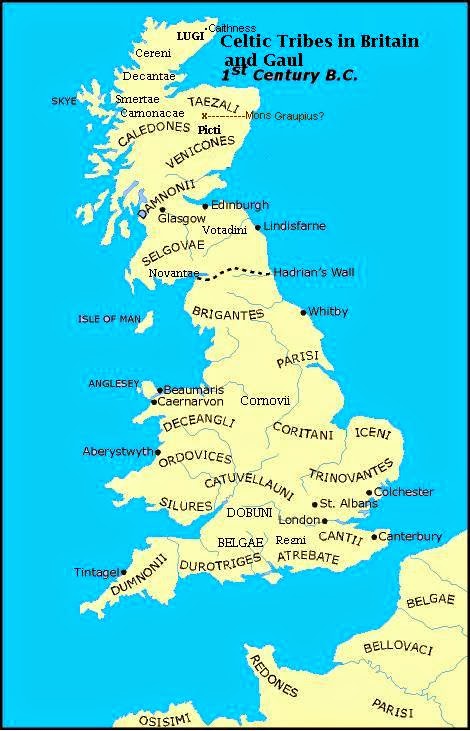 The legend concerning Joseph of Arimathea's connection to Britain has support from the sciences. Genetic studies have confirmed about 70% of native British men has Y-DNA R1b ancestry, which is the same genetic group as King Tut.

An early population living in the region of Cornwall were Dam-oni which means red people. Dam-oni is likely a reference to the red skin. They were the builders of the great shrine city of Heliopolis, Biblical On.

A variant spelling is Dumnonii (shown on the map). The Dam-oni may have come from Carnac in Brittany because the stone monoliths in Damnonia are like those in Carnac, though smaller. On the Nile the ancient shrine at Karnak was built with huge stones by skillful craftsmen.


Jews lived in Cornwall from before the Roman Period. They were as tradesmen, artisans, stone masons, metal workers, and miners. Among them were the priests who performed animal sacrifices, circumcision, and the Sun blessing ceremony (Birkat Hachama). Today rabbis perform the ceremony only every 28 years on a Tuesday at sundown, but in the ancient world this ceremony was probably performed by the Habiru at mid-winter, from which point the days would begin to lengthen, and at mid-summer, from which point the days would begin to shorten. The circle at Stonehenge was designed to help the priests know when to perform such ceremonies. The word Samhain is clearly related to the Arabic word for the Sun - shams. Ha-in is probably of Semitic origin also, and may be a variant of ha-on, referring to the sea-faring Ainu/Oni.

The inhabitants of Cornwall were involved in the manufacture of tin ingots. The area has prehistoric tin mines, stone monoliths, and iron age fortresses. This is the region where Joseph of Ar-Mathea is said to have visited, and the presence of Hebrew is evident in place names like Marazion, meaning "sight of Zion" or Menheniot, which is derived from the Hebrew words min oniyot, meaning "from ships." Menheniot was a center of lead mining.

The smiths of Cornwall also worked gold. This golden lunula from Cornwall dates to between 2400-2000 BC. 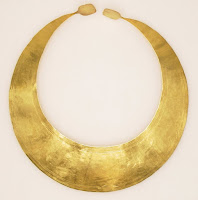 The Hebrew living in the British Isles also exhibited great skill in the construction of stone monuments, as did their Kushite-Kushan ancestors who built monuments at Karnak and Heliopolis on the Nile, and stone fortresses like Meroe on the Orontes. Their ancestors probably built Göbekli Tepe in southern Turkey, and Catalhoyuk in Anatolia. Their mining expertise was evident in the construction of excavated pyramid tombs such as those found in Bosnia and the Tarum Valley of China.

Prehistoric stonework of cairns, henges, and brochs is found throughout the British Isles. Chambered cairns have been found in vast areas of Scotland, some dating to 5,000-6,000 B.C. Huge kerbstones are found at the entrance of some cairns. These are shaped to fit a passageway leading to the royal burial chambers. In Orkney the intricate and extraordinary cairn at Maeshowe (shown above) is chambered exactly like that of ancient royal tombs found in Bosnia.

Similar stone entrances have been discovered in New England also. Compare the Maeshowe entrance to the entrance of the Acton Massachusetts chamber shown below. 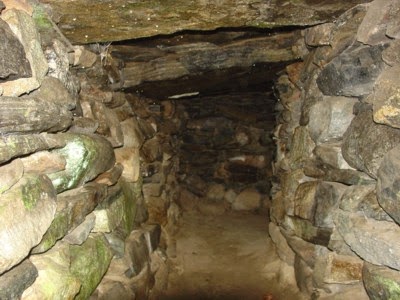 The many pyramids, stone monuments, temples, shrine cities, and stone tombs of the ancient world show a remarkable similarity in their construction. They reveal accurate astronomical observations, as has been demonstrated through studies of Stonehenge. Fred Hoyle (California Institute of Technology) observes in his book on Stonehenge that men living 5000 years ago were "meticulous observers of the night sky" who "calculated with numbers" and "communicated sophisticated astronomical knowledge among themselves from generation to generation." From the earliest times, this was the work of priests and that has been shown time again by research into ancient sacred sites.


The motifs that appear on the stonework also connect the craftsmen of tombs, monuments and crosses to the ancient Hebrew emblem of the Creator, the Sun. Those motifs include the 6-prong solar wheel such as that found on the ossuaries of the ruling families in Jerusalem and the Celtic cross. 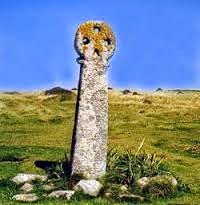 St. Piran's Cross (above) in Cornwall is a solar symbol. Saint Piran or Peran was an early 6th-century Cornish abbot and the patron saint of tin-miners.