The Priesthood in England - Part 1


This is Part 1 of a 4-part series on the Priesthood in England. You are encouraged to read the whole series. Parts 2, 3 and the conclusion are linked at the bottom under "related reading". 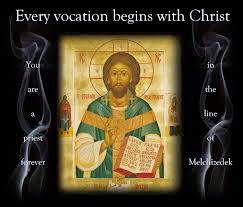 
Depending on who is telling the story, accounts differ as to when the priesthood came to the British Isles. Anglicans tend to give this account:

Christianity was already established in the British Isles by A.D. 47 according to Gildas's De Excidio et Conquestu Britanniae. Hebrew Christians likely entered as metal workers and traders traveling long the tin route between Spain and Ireland.
The preamble of a 1421 letter by Abbot Nicholas Frome to Henry V asserted that Joseph of Arimathea and his companions were sent to England in A.D. 63 by St. Philip, who was on mission to Gaul (France). It was copied from materials found in William of Malmesbury’s interpolated De Antiquitate Glastonie Ecclesie. However, the date of 63 A.D. for the arrival of Joseph of Arimathea seems too late.

Mining in Cornwall and Devon in England began as early as 2150 BC. The Ding Dong mine is one of the oldest mines in Cornwall. An old miner told A. K. Hamilton Jenkin in the early 1940's: "Why, they do say there's only one mine in Cornwall older than Dolcoath, and that's Ding Dong, which was worked before the time of Jesus Christ." (Hamilton Jenkin, A. K. Cornwall and its People. London: J. M. Dent; p. 347) According to local legend, the Din Dong mine was one of the places visited by Joseph of Arimathea (the Ar clans of Matthew).

The earliest historical evidence of Christianity among the natives of Britain is found in the writings of the Africans Tertullian and Origen in the first years of the third century. Their awareness of Christians in Roman Britain suggests that they were aware of traffic between the Island and North Africa.
Three Romano-British bishops, including Restitutus, are known to have been present at the Council of Arles in 314. Others attended the Council of Sardica in 347 and that of Ariminum in 360, and a number of references to the church in Roman Britain are found in the writings of 4th century Church fathers.

In the 1st or 2nd centuries, southern Britain became part of the Roman Empire. In 595, Pope Gregory of Rome sent missionaries to the Kingdom of Kent under the direction of the Benedictine prior, Augustine. Augustine became the first Archbishop of Canterbury.


The Roman Catholic Church tells this story:
According to tradition, the authority of Rome is anchored to the Apostle Peter who is claimed to be the first Pope. This is based on the Roman Catholic interpretation of Matthew 16:17-19: Jesus said, "And I tell you, you are Peter, and on this rock I will build my church, and the powers of death shall not prevail against it. I will give you the keys of the kingdom of heaven, and whatever you bind on earth shall be bound in heaven, and whatever you loose on earth shall be loosed in heaven."
The Bible tells us very little about Peter in Rome. However, it does tell us a great deal about Paul's time in Rome. Rome ignores the fact that Ananias of Damascus was likely a Hebrew priest through whom the charism of the Holy Spirit was delivered to Paul. "Ananias laid hand on Paul to pray for him to be filled with the Holy Spirit. Once he laid hands on Paul, he was immediately filled with the Holy Spirit." (Acts 9:17)

According to the Roman account, Pope Gregory the Great chose a Benedictine monk named Augustine in AD 595 to lead a mission to Britain to convert King Æthelberht and his people of Kent from Anglo-Saxon paganism to Christianity. Augustine was the prior of a monastery in Rome.

Kent was chosen because Æthelberht had married a Christian princess, Bertha, daughter of Charibert I the King of Paris. It was expected that Bertha would exert some influence over her husband. This initiative of Pope Gregory is known as the Gregorian mission. Before reaching Kent Augustine and the missionaries who accompanied him considered turning back, but Gregory urged them on, and in 597 Augustine landed on the Isle of Thanet and proceeded to Æthelberht's Canterbury.

Augustine became the first Archbishop of Canterbury in 597 and converted many of the king's subjects, including thousands during a mass baptism on Christmas Day in 597. He is considered the "Apostle to the English" and a founder of the English Church.

King Æthelberht converted to Christianity and allowed the missionaries to preach freely, giving them land to found a monastery outside the city walls. Pope Gregory sent more missionaries in 601. Roman bishops were established at London and Rochester in 604, and a school was founded to train Anglo-Saxon priests and missionaries.

Anglican orders were not declared null and void by Rome until 1896. When Reginald Pole was sent by Julius III as the Papal legate to England, one of his jobs was to review Anglican orders. According to Vatican records, the orders of the English clergy were deemed valid by Pole and Rome. The reconciliation was almost finished before Pole’s arrival, and no Presbyters were put out of office on account of defect of Order. One or two were reordained under him. Pole propagated the principles of Eugenius IV which were rejected by Leo XIII who declared Anglican orders invalid in the 1550's for political reasons. Also, in the Continuing Anglican Churches the Priests have their orders from Bishop Chambers who got his Apostolic Succession from the Polish National Catholic Church (PNCC). Rome recognizes all of the PNCC's sacraments and cannot logically deny the validity of the orders of Continuing Anglican clergy. (See more on Anglican Orders here.)

The early Christian writers Tertullian and Origen mention the existence of a British church in the third century AD and in the fourth century British bishops attended a number of councils, such as the Council of Arles in 314 and the Council of Rimini in 359.

The first member of the British church whom we know by name is St. Alban, who was martyred for his faith on the spot where St. Alban's Abbey now stands. The Orthodox tend to credit the spread of Christianity in Roman Britian to the influence of monks.

The British church was a missionary church with figures such as St. Illtud, St. Ninian and St. Patrick evangelizing in Wales, Scotland and Ireland, but the organization of the church suffered from the invasions by the Angles, Saxons and Jutes in the fifth century. The monasteries were often raided by the invaders. In 597 a mission sent by St. Gregory the Dialogist and led by St. Augustine of Canterbury landed in Kent to begin the work of converting these pagan peoples.

What eventually became known as the "Church of England" was the result of a combination of three traditions, that of Augustine and his successors, the remnants of the old Romano-British traditions and the Celtic tradition coming down from Scotland and associated with people like St. Aidan and St. Cuthbert.

These three traditions came together as a result of increasing mutual contact and a number of local synods, of which the Synod of Whitby in 664 has traditionally been seen as the most important. The result was an English Church, led by the two Archbishops of Canterbury and York, that was fully assimilated into the mainstream Church. This meant that it was influenced by the wider development of the Christian tradition in matters such as theology, liturgy, church architecture, and the development of monasticism.

There is only point on which all three accounts agree: Augustine was the official representative of Rome and was based in Canterbury. So it is that the British were claimed as a Roman franchise. That historical reality has had ramifications beyond Henry VIII and the Reformation. The Roman narrative is largely accepted, and the finer details of the other accounts are neglected. The result is a skewed understanding of the arrival of priests in England. Resources are available that can help to construct a more accurate picture of how the Messianic Faith thrived in the Isles before Augustine's mission. In this series we will trace historical events that shed light on how the priesthood came to be planted in England.


Related reading: Joseph of Arimathea; Was King Arthur a Descendant of Nilotic Rulers?