In the ancient world, the Nile River was called Ar, meaning Venerable. The Ar prefix is found in the names of many rulers and ruler-priests. Joseph of Ar-Mathea is an example. He is designated as being of the venerable clan of Mathea (Matthew).
The name Ar-thur raises a question about his ancestry, assuming he is an historical person. It could identify him as being of a venerable clan associated with a ruler-priest clan. THR in Hebrew means to be pure. It corresponds to the Ancient Egyptian TR, meaning pure.
It is thought that Arthur's name is related to the Brittonic root arto, meaning bear (In Greek artos means bread.) That is possible. However, I would like to suggest a different possibility. Ar-thur might as well be of a venerable house with origins in the Nile Valley.
Many rulers of history have names with the Ar prefix. Consider the following: Arpachshad, Archelaos, King Arwium (of Kish), Ar-Shem, Arsames, Artix, Araxes, a Jebusite called Araunah, Artaxerxes, Artabanus, Arêtes, Arishen, Araunah (means "Lord" in Hurrian), Joseph of Arimathea, King Aretas (Nabatean), King Arthur, and King Arviragus. Arba, the father of Anak, one of the "mighty men of old" (Gen. 6). In fact, the Ar- element appears commonly among the early Hebrew ruler-priests.
Rulers such as these built their strongholds at high elevations near water sources. This was true along the Nile, in the Baltic region, in Southern China, and in Cornwall. The Cornish fortress of Tintagel or Trevena is an example. In Cornish, it is called Tre war Venydh, meaning "village on a mountain."


Legend has it that King Arthur was born at Tintagel Castle. The ruins of Tintagel Castle stand on an island dominating the 300 feet (90 meters) high cliffs. Tin (or din) means fortress and tagel refers to a constriction or narrows, as in the neck of an island. Arthur was born into a Christian noble family of Cornwall which exercised influence on Christian missions and the defense of the Faith against Pagans from about 480-530. Christian priests were already well established in Cornwall, Devon, and Ireland by 44 AD.


The Ravenna Cosmography, compiled around 700 A.D. from Roman material 300 years older, lists a route running westward into Cornwall. On this route is a place then called Duro-cornovio. The Latin Duro-cornovio corresponds to the British Celtic duno-Cornouio-n, which means "fortress of the Cornish people."
There may be a connection between Duro-cornovio and the Akkadian dûr which refers to a fortress, as in Dûr-Sharrukin, meaning “Sargon's fortress." The Akkadian word dû means hill.
However, the original name for Cornwall was Kernow, which appears to be related to words designating royal sites at high elevations. "Kar" refers to cliffs, mountain tops, rock shelters, and locations of burnt offerings and bonfires.
Many rock shelters have been identified in the Carpathian Mountain range. The range is called Karpaty in Czech, Polish, and Slovak, and Карпати in Ukrainian, Carpați in Romanian, Karpaten in German, Kárpátok in Hungarian, Karpati in Serbian, and Карпати in Bulgarian. In Albanian, karpë means "rock."

In Dravidian car means "sheltered together" and kari refers to a river. In Manding, kara means "to assemble." Apparently, these were places where fires were maintained because kar is associated with charcoal, soot and the color black. The Turkish kara means "black." In Magyar, korom refers to soot, as does the Korean word kurim. Among the Nilotic Luo, kar specifies a place with boundaries.
Early History

From 400,000 BC to 200,000 BC, archaeological finds of flint axes and blades indicate that people were living in Devon and moving through Cornwall which was a good hunting ground, as it was too far south to be under the ice sheet. By 40,000 BC settlements dotted South West Britain.


Carn Euny is an Iron Age settlement consisting of courtyard houses and the remains of round houses. The village dates from the the 1st century BC, though there is evidence that the site had been settled since the Bronze Age. Carn Euny is best known for the well-preserved fogou, a large underground passageway, which is more than 65 feet (20 metres) long. This fogou runs just below the surface of the ground and is roofed with massive stone slabs typical of the tunnels built by the R1b stone masons. 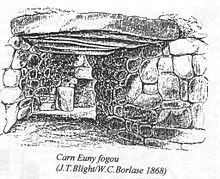 Mining in Cornwall and Devon began in approximately 2150 BC. From that time Hebrew mining experts were present in Cornwall. In the 1st century AD, one of those experts was Joseph of Ar-Mathea, which means Yosef of the Venerable (Ar) clan of Matthew.
About 70% of native British men have Y-DNA R1b ancestry which is the same as King Tut.

Genetic studies have confirmed that the early Hebrew dispersed widely across the ancient world. Their earliest known places of worship were along the Nile, and they are described as having a reddish skin tone. Interestingly, an early population living in Cornwall were the Dam-oni, which means “red people.”
The word Dam-oni is derived from two words found in the Bible: dam, a reference to blood and the color red (dammu in Ancient Akkadian), and On, a reference to the great shrine city of Heliopolis (Genesis 41:45). The Hebrew ruler Joseph married the daughter of a high-ranking priest of On. Some of the early Hebrew are described as red or ruddy: Adam, Seth, Esau, and King David.
The Dam-oni may have come from Carnac (Karnac) in Brittany because the stone monoliths in Damnonia are like those in Carnac, though smaller. On the Nile, the ancient shrine at Karnak was built with huge stones by skillful craftsmen under the authority of rulers and priests, possibly ancestors of some early inhabitants of Cornwall.

The region where Joseph of Arimathea visited in Cornwall is said to have some Hebrew place names like Marazion, meaning "sight of Zion" and Menheniot, which is derived from the Hebrew words min oniyot, meaning "from ships." Menheniot was a center of lead mining.

Related reading: Stone Work of the Ancient World; The Clans of Ar;  R1b Genetic Ancestry in Britain; The Mighty Men of Old; Threshing Floors and Solar Symbols; Origins of the Irish Scottish, Welsh and English R1b-M222 Population, The Priesthood in England (Part 2); King Tut and the Dispersion of R1b Peoples