The Priesthood in England - Part 2


The ruler-priest caste was responsible for metal work, record keeping, the construction of royal tombs and astronomical observations. These priests, called "Habiru" in ancient texts, were attached to rulers from Lake Chad to Southern China and from Anatolia to the British Isles.


In Part 1 we considered the Anglican, Roman Catholic, and Eastern Orthodox accounts of the origins of the Church of England. The information provided in Part 1 was taken from official websites of each of these branches of the catholic Faith. There is only point on which all three accounts agree: Augustine was the official representative of Rome and was based in Canterbury. So it is that the Britons were claimed as a Roman franchise. That historical reality has had ramifications beyond Henry VIII and the Reformation. The Roman narrative has dominated the conversation for so long that the deficiencies of the account are rarely questioned.

Rome is in error when it claims to have brought Christianity to the Britons and that there was no priesthood in Britain prior to Augustine. Father Louis R. Tarsitano expressed the truth when he wrote: ... it is a simple error of fact to claim that the Anglican Church “began” in the Reformation, or even with the late 6th century mission of St. Augustine to evangelize the newly arrived Anglo-Saxon pagans. The bishops of a five-centuries-old Christian Church met Augustine on the beach. (Of Forms and the Anglican Way)

The Eastern Orthodox narrative places greater emphasis on the role of Irish monks and priests and their evangelistic efforts in the 5th and 6th centuries. However, it does not explore the evidence of a priest caste in Ireland well before the Roman Period. These priests served as prophets at oak trees, just as was done in Abraham's time (Genesis 12:6). They sacrificed animals. They believed in the eternal soul. They were wise in astronomy, medicine, construction of stone monuments, and metal work. They performed circumcisions, a practice that persisted among the royal families of Anglo-Celtic heritage. They offered sacrifices and prayers at sacred shrines, and the priests were ordained by ruler-priests. The description of the ruler-priests suggests that they were Hebrew priests who came to Ireland, Wales, and England. Evidently, some settled there.

This is not new information. There is much evidence to attest the dispersal of Hebrew priests across the ancient world. The term "Hebrew" is from Ha-biru/Ha-piru which appears in many ancient texts and refers to a caste of ruler-priests who served at the great shrines and sun temples (O-piru) of the ancient world. These were monuments located at water sources and often at high elevations, indicated by the root AR, as in Armagh (high place). The Ar reference is found in the names of many historical places and persons, including Arba, Aroch, Ar-Shem, Arsames, Artix, Araxes, the Edomite ruler Arêtes, and an obscure figure of first century Briton named Arviragus, the King. Then there is the ruler-priest Joseph of Ar-Mathea and a Jebusite ruler called Araunah who sold King David a threshing floor upon which David constructed an altar. Threshing floors were built at high flat elevations so that the wind would carry away the chaff. These high places - the Ar places - were where sacred ceremonies took place.

The Ar are identified with the "hill people" or people of the kar (high place, mountain shelter) or har (mountain). The peoples built the structures of the archaic world. They are called the "mighty men of old" in Genesis. Their rulers were effective warriors and kingdom builders. They were also priests. Dr. Catherine Acholonu explains, "In Nigeria the caste under reference is the Ar/Aro caste of Igbo Eri priest-kings, who were highly militarized in their philosophy." The rulers were served by metal workers who fashioned weapons and symbols of authority. These are called the Nes, Neshi or Nehesi. The Neshi still function as priests in Igboland.  The metal-working Nes of Anatolia are their kin.

Nehesi means "One who serves Hesi." Hesi was another name for Hathor, Horus' mother. Throughout the ancient Afro-Asiatic world shrines were dedicated to both Horus and Hathor. These were mound cities with water sources. Tell-Hesi, in Palestine, is an example. Other mound shrines included Hazor and Beersheba. In Anatolia they built Catalhoyuk. The houses excavated in Catalhoyuk are dated between 6800-5700 B.C. At Horoztepe, in northern Anatolia, royal tombs have been discovered dating from 2400–2200 BC. These are richly furnished with finely crafted artifacts in bronze, gold, and silver.

It is thought that the Hittites introduced iron work to Anatolia, but the term "Hittite" is an anachronism. They called themselves Nes, or Nus (Nuzi), and their language was called Nesli. They were known for their skill as metal workers and the root of their original name is NS, a symbol for the serpent.

In his study of mythology, Joseph Campbell concluded that Scythians were Hittites who intermingled with Celtic and Japhetic tribes, including the Magyar (Hungarians) who claim descent from Noah through his son Japheth. The Nilo-Saharan origin of the Magyar has been confirmed by genetic testing.

Abraham interacted with the Hittite clans of Het who are listed in Genesis 10. HT is the Hebrew and Arabic root for copper - nahas-het. Nahash means serpent. As an adjective it means shining bright, like burnished copper. The clans of HeT were Bronze Age copper smiths who ranged from Timnah to Anatolia. The serpent image was sacred for them, just as it was for Moses the Horite ruler who fashioned a bronze serpent and set it on the standard (Numbers 21:9).


It is evident that the Ar peoples were highly skilled in the construction of stone tombs and monuments. These were shrine centers attended by priests and were circular with large perimeter stones such as those found at Stonehenge and Göbekli Tepe (shown below). 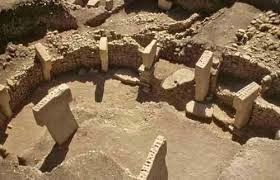 The Ar who controlled the kingdoms of Tyre and Arvad. The Arvadites and Arkites are mentioned in Genesis 10:15-18. They are the peoples of Sidon and Het/Heth. They spread to the northeast with the Kushite expansion. Their Mesopotamian kin are called "Arameans" in the Bible.

The Habiru/Hebrew priests were in the service of rulers in India, Pakistan, Bactria, and throughout the Caucasus. They served Kushite and Kushan rulers from the Sahara to the Tarum Valley of China. Among the Kushites were the Ainu who dispersed out of the Nile to Northern Japan and Okinawa, and to Scandinavia and the Hudson Bay area of Canada. It seems unlikely that they would have avoided the British Isles.

Some of the Hebrew living in the British Isles would have been living in expectation of the Messiah and would have heard about Jesus' death and resurrection from Jews with whom they did business. Men like Joseph of Ar-Mathea would have been missionary merchants and tradesmen who had opportunities to plant a Christian presence among their fellow priests. As a member of the Sanhedrin, Joseph was qualified to perform ordinations.

This suggests that the priesthood among the Celts and Britons has a longer history than has been generally recognized. It is at least as early as the episcopacy of Evodius of Antioch (53–69 A.D.) and the episcopacy of James of Jerusalem (d. 69 A.D.), and the episcopacy of Linus of Rome (67-79 A.D.). According to Gildas's De Excidio et Conquestu Britanniae there were already Christians living in Britain in 46 AD. It is likely that these were Hebrew believers who were metal traders and mining experts. Metal working priests were a caste among the Hebrew. They continued an ancient craft that was older than even Aaron who fabricated a golden Horus calf (Exodus 32) and Moses who fabricated the bronze serpent (Numbers 21).