Armed with bows and arrows, Nubian soldiers from Ta-Seti, the Land of the Bow, are shown marching to war. This wooden model from about 2040 B.C., was found in a tomb in Assiut, Egypt. Hunters using bows and arrows appear in Nubian rock art as early as the Neolithic period and some of Nubia’s most important trade products, like animal skins and ivory, came from the hunt.

The Nubians were famous for boxing, wrestling, stick fighting and archery. The Greeks learned these skills from the ancient Egyptian and Nubian warriors. They refined these skills through martial sports called Pankrashan, which is Pan Kau Ra/Rau Shen - all encompassing spirit force of Ra.

Annu warriors were called Yaunguru. The Y is a solar cradle and Aun is a variant of Anu (Annu). The Sanskrit word guru is a variant of the ancient Egyptian word geru, which means self-mastered or silent. Plato wrote about the balanced judgement or silent (stoic) self-mastery of these warriors. He called it "thymos" in The Republic.

According to J. Daniel Hays, the Nubian Kushites’ international reputation as mercenaries explains how a Kushite designated as the king's high ranked official  - Ebed-melech -  in Jeremiah 38:7 came to advise King Zedekiah, playing a pivotal role during the Babylonian siege of Jerusalem from 588 to 586 B.C.


When Jeremiah was condemned and put into a cistern, Ebed-melech convinced King Zedekiah to free the prophet. Here is the passage:


(2) "Thus says the LORD, He who stays in this city shall die by the sword, by famine, and by pestilence; but he who goes out to the Chalde'ans shall live; he shall have his life as a prize of war, and live.

(3) Thus says the LORD, This city shall surely be given into the hand of the army of the king of Babylon and be taken."

» (4) Then the princes said to the king, "Let this man be put to death, for he is weakening the hands of the soldiers who are left in this city, and the hands of all the people, by speaking such words to them. For this man is not seeking the welfare of this people, but their harm."

(5) King Zedeki'ah said, "Behold, he is in your hands; for the king can do nothing against you."
(6) So they took Jeremiah and cast him into the cistern of Malchi'ah, the king's son, which was in the court of the guard, letting Jeremiah down by ropes. And there was no water in the cistern, but only mire, and Jeremiah sank in the mire.

(7) When E'bed-mel'ech the Ethiopian, a eunuch, who was in the king's house, heard that they had put Jeremiah into the cistern -- the king was sitting in the Benjamin Gate --


Dr. Hays believes that this Nubian gained the ear of the King of Judah because he was a high-ranking military attaché hired by Zedekiah or dispatched by Egypt.

J. Daniel Hays became interested in the Kushites while in Ethiopia from 1982 through 1987 where he was involved in theological education and water development. He has been on the faculty at Ouachita Baptist University in Arkadelphia, Arkansas since 1992. He is the author of entries on Ebedmelech and Zerah in the Eerdmans Dictionary of the Bible.

It is interesting to note that Ebed-melech is designated by three terms: Kushite, Nubian, and Ethiopian. The term "Kushite" includes many peoples whose point of origin was the Upper Nile Valley.

Beginning in Nubia and Sudan about 8,000 years ago, the Kushites spread across the Levant and Mesopotamia, going as far as Central Asia. This is expressed in Genesis 10, which says that Nimrod, a son of Kush, established his kingdom in Mesopotamia.
They also spread into the interior of Africa along the Shari and the Benue rivers, establishing kingdoms in Nigeria and the southern Kordafan. They also went west. It appears that the Ashante of Ghana were Kushites. Nte means "people of" and Asha is a proper name. The Ashante are the people of Asha, a Kushite ruler who established a kingdom in West Africa.

The name Asha is a priestly name found in the Bible. One of Jesse's grandsons was named Asahel, which means "made by God." The priest Elkanah had a son named Amasi (1 Chron. 2:25, 35), and a Jerusalem priest was named Amashai (Neh. 11:13). This suggests that the origins of the priesthood of Israel are to be traced to the older Kushite civilization. This makes sense, since Abraham's ancestors came from Kush. 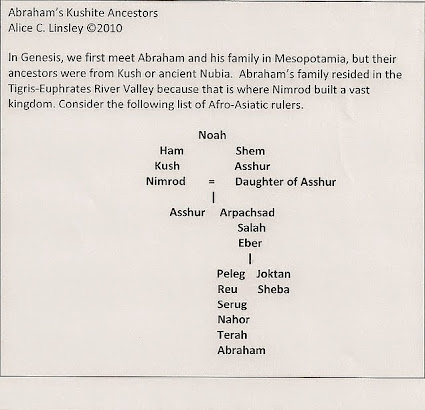 Abraham's father was called Terah, an ancient Nilotic word for priest. Terah was a descendant of both Ham and Shem, as the ruler-priest lines intermarried. Among the Nilotic Luo, for example, ter means ritual, especially in reference to cleansing. Abraham’s father, Terah, bears the title of priest because he was a descendant of the pre-dynastic ruler-priests of the Upper Nile.
Below is an image of a Sethite Hebrew Tera-neter, the title for a ruler-priest among the Annu/Anu. The image is found in Flinders Petrie's The Making of Egypt.  The Annu dispersed widely, taking their religious beliefs and practices with them. 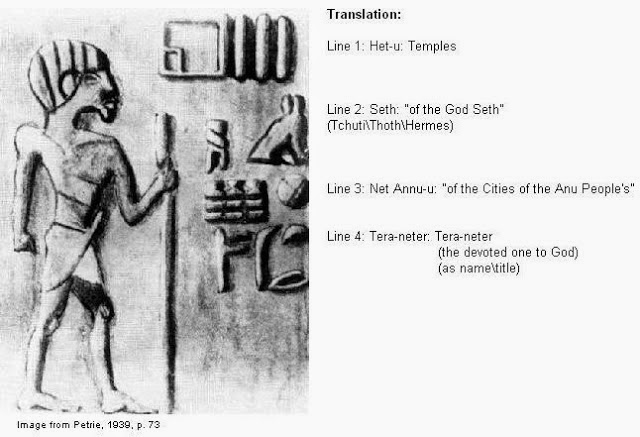 The various regions of ancient Kush later came to be called by different names. Nubia was originally remembered as the land of gold. Nub means gold in Ancient Egyptian. In Genesis 2, the region is identified as Ha-vilah, the place where the headwaters of the Nile separate into what we call today the White Nile and the Blue Nile. Later, the Greeks called the region i "Aithiopia" which means black. When the Arabs arrived, they translated aithiopia into the Arabic equivalent soudan (Sudan) which also means black.


Were all Nubians black?

Petrie's study of ancient images suggested to him that the peoples of the Nile Valley were racially mixed. He found images of Nubians in which some have black skin, others red skin, and some have brown skin. This confirmed what had been discovered by the 1828 Franco-Italian expedition to Egypt led by Jean-Francois Champollion and Ippolito Rosellini. Below is a detail from one of Rosellini's drawings showing both black and red Nubian warriors who were taken captive by the Egyptians under Rameses II (1279-1213 B.C.). 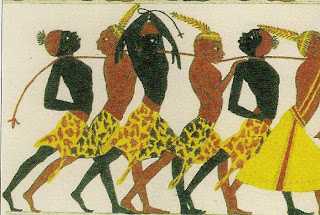 Anthropological evidence suggests that the range of skin color probably existed from the beginning in Africa. Even today it is not uncommon for babies born from the same parents to show different features associated with "racial" types. Here are images of unusual, but not rare, features found within the range of "African" genes. 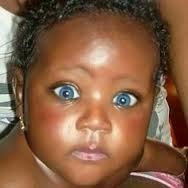 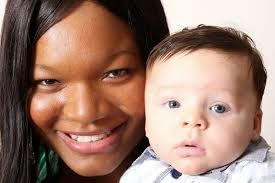 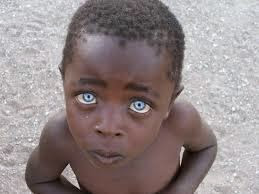 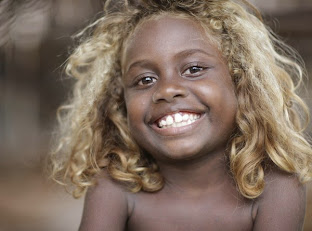