The Urheimat of the Canaanite Y

Biblical Anthropology involves research into the origin and developpment of the scripts of biblical populations such as the Sumerians, the Proto-Saharans, the Egyprians, and the Canaanites. The German word for the primitive homeland of the language is "urheimat" and the discovery of the urheimat requires linguistic, genetic, anthropological, and archaeological research.

Genetic, archaeological and linguistic studies of Nilo-Saharan-speaking populations point to the urheimat in the Nile Valley before 6000 BC when the Sahara was wet and sustained herds. There were subsequent migrations along the Nile Valley into Kenya and Tanzania, and westward to the Chad Basin, Noah's homeland. Nilotes also moved into Canaan and Mesopotamia.
The linguists Peter T. Daniels and William Bright note in the Preface to the work they edited that the oldest known scripts are those of the anceint Near East. They state, "At the root of the single tree of all the scripts that serve the rest of the world is the Canaanite." (The World's Writing Systems, p. xxxvi) 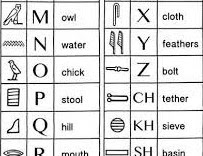 The cattle-herding Proto-Saharans and the later Egyptians had similar imagery to represent the presence of the High God. For the Nilo-Saharans the long horns of the bull were viewed as a cradle for the Sun, the emblem of the High God. Among the Egyptians, this was conveyed by two upright, parallel feathers which constituted the letter Y, a solar symbol.

Hathor wearing the double solar crown. Relief found at the Hathor Temple at Dendura.
Among the Horite Hebrew divine appointment was symbolized by the overshadowing of the Sun. On ancient murals Hathor is shown overshadowed as a sign of her divine appointment to bring forth Horus, the son of Re.
When she asked how she was to conceive the Messiah, the Virgin Mary was told that she would be "overshadowed" (Luke 1:35). In Christian art this is conveyed by images of the Holy Spirit hovering over Mary's head in the form of a dove.


The biblical texts indicate a link between the Sun cradled in the bull's horns and the parallel feathers and the Canaanite Y. The Y designates a divinely appointed ruler or priest, which is why it appears in the Hebrew names of many biblical persons: Yaqtan (Joktan); Yishmael (Ishmael); Yishbak; Yitzak (Isaac); Yacob (Jacob); Yehuda (Judah); Yosef (Joseph); Yetro (Jethro); Yeshai (Jesse), Yonah (Jonah), Yeroboam (Jeroboam), Josedech (Yosedech) and his son Yeshua (Joshua) who wore the double crown (Zechariah 6:11).
The Y-shaped headdress of the Somali nomads is called barki and refers to the sun's blessing upon the wearer. The word corresponds to the Hebrew word birka.

The Y symbol was associated with the horns of the cow, the animal totem of Hathor, the mother of Horus, called the "son" of God. Images of Hathor show her with the sun cradled in the horns. This solar symbolism for the High God is why cows were venerated in the ancient world.

Hathor was the patroness of metal workers. A Canaanite temple dedicated to Hathor was discovered at the southwestern edge of Mt. Timnah by Professor Beno Rothenberg of Hebrew University. Timnah is the site of the oldest copper mines in the ancient Near East.

The Y symbol is found in the "Canaanite" alphabet shown in the center of the chart below. Hebrew was one of the languages that developed from the Canaanite. However, the oldest known Semitic language is Akkadian. Tha Akkadian reflects the linguistic worldview of the Afro-Asiatics.

The symbolism of the Y involves the wider solar symbolism of Abraham's ancestors who regarded the sun as the Creator's emblem. These archaic ancestors apparently hoped for life after death through the agency of a great ruler. The ruler would come of the ruler-priest line and his name would bear the initial Y as a sign of his divine appointment.

The ancient Nilo-Saharans, the Egyptians, and the Canaanites regarded the Sun as the emblem of the Creator and believed that the sun's rays inseminate the earth and give life. Today we know from science that there would be no life on earth without the Sun.

Looking again at the chart above, note a close connection between the ancient Egyptian and the North Cushitic Beja. The Beja (Arabic: البجا‎) live in parts of Sudan, Egypt and the Horn of Africa. Their name comes from the ancient Egyptian word for meteroric iron - bja (metal from heaven), and they were/are metalworkers. Beja corresponds to the Sanskrit word bija, meaning semen or seed.

We also know, as did these ancient peoples, that there is a relationship between solar events and the winds on earth. This is expressed in the Egyptian ankh. In ancient Nile monuments Hathor is often shown holding an ankh to someone's lips, offering them the animating Breath of Life or the Ruach (Wind/Breath) of God.

The Agadez Cross (left) is crafted by the Inadan smiths of Niger and symbolizes the same sense of divine blessing and appointment. It is equivalent to the Canaanite Y and to the Egyptian ankh. All three are solar symbols.

This common solar symbolism suggests that the scripts and cultural perceptions of the Nilo-Saharans, the ancient Egyptians, the Canaanites, and the Mesopotamians share a point of origin, probablythe Nile Valley. This also appears to be the point of origin of Messianic expectation long before the emergence of Judaism.


Related reading: The Canaanite Y and the Phaistos Disk; Boats and Cows of the Nilo-Saharans; A Tent for the Sun; Iron Seeds From Heaven; The Aleph as Ox Head; Celestial Symbols that Speak of God; The Virgin Mary's Horite Ancestry; Who is Jesus?; Who Were the Wise Men?; The Ra-Horus-Hathor Narrative