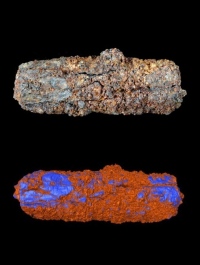 Nature reports on the a study of 3,300 year old meteoritic iron beads found in Gerzah, a prehistoric cemetery about 40 miles south of Cairo.The Gerzeh bead (top) has nickel-rich areas,

At el Gerzah in northern Egypt around 300 graves were discovered in 1911-1912. Tombs 67 and 133 contained a total of nine iron beads. Analysis of the beads indicates that they were formed from surface iron deposited by meteorites.

The news has led to much speculation about prehistoric religion in the Nile Valley. Joyce Tyldesley, an Egyptologist at the University of Manchester, said, “The sky was very important to the ancient Egyptians.” Tyldesley, a co-author of the paper, goes on to make this unsubstantiated claim: “Something that falls from the sky is going to be considered as a gift from the gods.”

She is correct about the importance of the sky among prehistoric Nilotes and Afro-Arabians. However, she is unjustified in her claim that they were polytheists. This is an assumption, not a substantiated fact.

Campbell Price, a curator of Egypt and Sudan at the Manchester Museum, emphasizes that nothing is known for certain about the Egyptians’ religious beliefs before the advent of writing. Price is correct on this point. He then suggests that the significance of the iron beads might be understood in light of later Egyptian beliefs. He points out that during the time of the pharaohs, the gods were believed to have bones made of iron. This is referenced throughout the Ancient Egyptian Pyramid and Coffin Texts. Here Price slips into the same error as Joyce Tyldesley. They interpret prehistoric Nilotic religion through the lens of dynastic religion which blended elements from many traditions (syncretism).

It is exactly at his point where Biblical Anthropology can provide valuable insight by exploring antecedents, that is, pushing back the veil of time. Let us consider what is known and verified.

The ancient Egyptian rulers accessorized with meteorites. The material was associated with divine power, that is, power than comes down from heaven. King Tut's dagger had a tip made of meteoritic iron. The dagger had a gold sheath.

Commonly, iron artifacts are found in the graves of rulers. Diane Johnson says, "Iron was very strongly associated with royalty and power." The ancient Egyptians had a hieroglyphic sign for “iron of the sky" by the 13th century BC.

Images from Nekhen, a 5800 year-old Horite shrine city, shown ruler-priests carrying flails and crooks and wearing iron beads around their necks. The flail and crook were the symbols of authority for the Pharaohs as the knob stick was a symbol of the authority of other rulers.

Given this information it is logical to conclude the religious context of those who wore these beads is reflected in the religion at Nekhen. At Nekhen in Sudan votive offerings were ten times larger than the normal mace heads and bowls found elsewhere, suggesting that this was a very prestigious shrine. Horite priests placed invocations to Horus at the summit of the fortress as the sun rose.

Horus was regraded as the Seed of Ra, conceived by Hathor when she was overshadowed by the Sun. The Sun was the emblem of Ra, the supreme creator. For the prehistoric Nilotes, the Sun was the source of insemination and the iron beads were called beja (bija in Sanskrit), meaning seed or semen. In other words, there is no evidence of polytheism at Nekhen or any other Horite site. Horus was the Lord of all the divine powers or lesser deities. This is called henotheism. Henotheism is a conception of the heavenly realm as a pyramid or hierarchy with a supreme God served by lesser ranked divine powers, angelic beings, or subordinate deities.

Hathor's totem was a cow and she is shown at Nile shrines holding her infant in a manger. Here we have elements of the Proto-Gospel and evidence that Messianic expectation is based on the Edenic Promise (Gen. 3:15) made to Abraham's Proto-Saharan and Nilotic ancestors.

Aspects of the prehistoric Nilotic solar symbolism are found in the Bible and in historical texts. Psalm 92:2 describes the Lord as “a sun and a shield.” The Victory Tablet of Amenhotep III describes Horus as “The Good God, Golden [Horus], Shining in the chariot, like the rising of the sun; great in strength, strong in might…” (Tablet of Victory of Amenhotep III, J.H. Breasted, Ancient Records of Egypt, Part Two, p. 854).


Blood and the Impulse to Immortality

Nobles were buried with red ocher at Nekhen. Red ocher symbolized blood and the hope of bodily resurrection. Abraham's Horite ancestors believed in the resurrection of the body and awaited a deified king who would rise from the grave and deliver his people from death. Horus was said to die and rise on the third day as the sun rises.

Oh Horus, this hour of the morning, of this third day is come, when thou surely passeth on to heaven, together with the stars, the imperishable stars. (Utterance 667)
Horus was the guardian of the ancient Egyptian and Kushite kings from as early as 4000 B.C. The kings were perceived to be the representatives on earth of the Ruler of the universe, the “sons” of God. From the earliest Dynastic Period, the king's name was written in the rectangular device called a serekh, which depicted a falcon perched on a palace façade. Horus as guardian and deity was manifest within the palaces and the shrines as the king himself. The king’s “horus name” was associated with gold and the sun which is the meaning of the title “Golden Horus” in which a falcon appears on the hieroglyphic sign for gold.
Horus was sometimes shown with the sun as his right eye and the moon as his left. This reflects the binary distinctions that characterize prehistoric Nilotic religion. With the right eye Horus sees all things. His left eye is shown blood red, having been injured in combat. To gain salvation for his people, Horus sacrifices one eye.

Nekhen was a Horite shrine city dedicated to Horus whose totem was the falcon or hawk. Early dynastic Egypt adopted the Horite religion and never practiced cremation, as in the religions that seek to escape physical existence (samsara).

The oldest known painted tomb (Tomb 100) with plaster walls. It dates to between 3500 and 3200 BC. Pillared chapels also have been discovered. The pillar or benben was a symbol of resurrection. Benben is formed by the redoubling of the root bn, meaning to "swell forth" as the sun swells on the eastern horizon. The ancient Egyptian word for the rising sun is wbn.

Benben have been found from Nigeria to India, the length of the ancient Afro-Asiatic Dominion, which is older than the Vedic Age.

Recently discovered tombs of officials from the 4th Dynasty were surmounted by conical mounds or benben. These tombs, along with the royal tombs at Giza, indicate that the ancient rulers hoped to rise from the place of death as the sun rises.

The sema sign of ancient Egyptian rulers (shown right) is a type of benben and expressed the hope of bodily resurrection.

The largest flint knives, dating to ca. 3200 BC. These were for ritual use, including circumcision. The name Ne-Khen relates to the practice of circumcision. The Egyptian word for phallus was khenen (hnn). It is related to khenty, meaning "before" or "in front."

Flint or obsidian knives were used to perform circumcisions. These often had edges sharper than modern surgical steel. Flint workshops have been found throughout the Negev, suggesting that even after the production of iron tools, the flint knife was preferred for circumcision. Infection was less of a risk given the high saline composition of the flint.

The prehistoric Nilotic worldview was binary, not dualistic. In a binary view one of the entities in a binary set is regarded on the basis of empirical observation to be superior in some way to the other. The sun is greater than the moon because it is the source of light whereas the moon's light is reflugent. Males are larger and stronger than females. The binary view pertains to gender, the distinction between heaven/sky and earth, and even to living organisms such as trees.

In Genesis 12:6 we read that Abraham sought guidance from the “moreh” or prophet when he pitched his tent at the Moreh’s Oak. Male prophets sat under firm upright trees such as oaks. These represent the masculine principle. Female prophets sat under soft trees with more fluid motion such as date nut palms. These trees are called "tamars" and they represent the feminine principle. Judges 4:4-6 says, “Deborah, the wife of Lappidoth, was a prophet who was judging Israel at that time. She would sit under the Palm of Deborah, between Ramah and Bethel in the hill country of Ephraim, and the Israelites would go to her for judgment."

Genesis 12 places the Moreh’s Oak at the sacred center between Ai and Bethel, on an east-west axis. Deborah's Palm was between Bethel and Ramah, on a north-south axis. Note the reversal of cardinal points and gender associations. This is typical of the binary system of the prehistoric Nilo-Saharans.


Related reading: The Sun and the Sacred; The Sun and the Moon in Genesis; The Origins of Christianity; Gerzah, a prehistoric Egyptian meteroite; Circumcision and Binary Distinctions; Solar Imagery of the Proto-Gospel; Ancient Egyptians accessorized with meteorites; The meteoritic origin of Tutankhamun's iron dagger blade