Evidence of Castes in the Book of Ruth 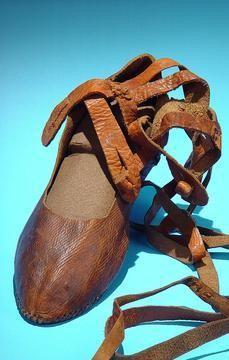 Now in earlier times in Israel, for the redemption and transfer of property to become final, one party took off his sandal and gave it to the other. This was the method of legalizing transactions in Israel. (Ruth 4:7)

In Ruth we find Boaz acting as the levir. In levirate marriage a woman is taken as a wife by her deceased husband's brother in order to produce an heir for her dead husband. Levirate marriage is practiced by societies with a strong clan and caste structures in which exogamous marriage is forbidden.

The Tahash caste is evident in the book of Ruth. They were the tanners who made the leather goods, including leather sandals. A leather sandal was used to finalized the agreement between Boaz and the kinsman redeemer. "Now in earlier times in Israel, for the redemption and transfer of property to become final, one party took off his sandal and gave it to the other. This was the method of legalizing transactions in Israel." (Ruth 4:7) One of Abraham's nephews was Tahash (Gen. 22:24).

The leather shoe was made of the hide of an animal. It represents a life taken or lost and is appropriate for a solemn oath. The exchange of the leather sandal is not specifically about levirate marriage, but rather about exchanging property after a death. Aben Ezra says that the giving of the leather shoe was "to confirm all things" whether by sale or barter.

The exchange of a leather shoe represents a solemn oath like that signaled by the exchange of a linen cloth, called "sudar." According to the Medieval rabbi Rashi, a linen cloth was used to make purchases and the cloth was called "sudar." Rashi is speaking of a different custom, but it too has ancient precedent given that "sudar" pertains to "Sudra" which refers to the Dravidians. Linen originated in the Nile Valley and was carried from there to India. Among Abraham's Nilo-Saharan ancestors wounds were treated with raw meat and bandaged with linen. Also dead domesticated animals were wrapped in white linen and buried near the towns.

The Dravidian leather workers are called "Madigas" and they are recognized as one of the oldest castes. The Madiga have nucleotide diversity levels as high as those of HapMap African populations. Among Abraham's people these were the "Ta-hash." One of Abraham's nephews was Tahash (Gen. 22:24).

This evidence for the African origin of castes such as the Horites and the Madigas has interesting implications for the Davidic monarchy. David was a direct descendant of Boaz who redeemed Ruth and her deceased husband's property in Bethlehem.

Bethlehem was a Horite settlement. 1 Chronicles 2:55 which says that Caleb's sons were Kenites. They were of Kenaz, a son of Eliphaz by Timna, daughter of Seir the Horite. Caleb's son Salma is designated the "founder" of Bethlehem in I Chronicles 2:51.

Abraham's people were a caste of ruler-priests who originated in the Nile Valley. The Horite Hebrew were devotees of Horus, the son of God, who was called "lord of the sky." In ancient Egyptian HR means "the one on high." The Horus name has been found on Egyptian hieroglyphs at the beginning of dynastic civilization (c. 3000 BC). The totem of Horus was the falcon and some fire altars were built in the shape of the falcon. Images of Horus show him with the body of a man and the head of a falcon. The falcon was a symbol of divine kingship among the ancient Nilotes.

The Horite ruler-priests were regarded as deified "sons" of God. They are often called "gods" (elohiym) as in Exodus 22:28: "Thou shalt not revile the gods (elohiym), nor curse the ruler of thy people."

The Hebrew word "Horim" is used among Jews today to designate parents and ancestors. In Englich Bibles the word is "Horite" and variants forms include the names Hur, Horonaim, Horoni, Horowitz, and Hori. Hori was the son of Lotan son of Seir whose descendants were the "lords of the Horites in the land of Seir" according to Genesis 36:20-29 and 1 Chronicles 1:38-42.


Related reading: The Origin of Castes; The Ethnicity of David and Abraham; Why Does Genesis Speak of Gods?; Threshing Floors and Solar Symbolism; Why Hebrew Rulers Denied Marriage to Royal Women