The priests of the Horite mounds and the Sethite mounds served the same king and worshiped the same God. The temples they built were aligned to the rising sun.

The Shaltout and Belmonte 2005 survey of the orientation of ancient temples in Upper Egypt (Nubia) and Lower Egypt listed the azimuths of axes of symmetry in nearly every temple in the region, including more than 100 entries. They also listed the declinations of astronomical bodies that would be visible at rising or setting along the axes of symmetry. They found a strong cluster of these at declination = −24º, which was the position of the sun at the winter solstice at the time.

They also found a preponderance of axes oriented toward the southeast (azimuth 115º−120º, depending upon latitude), indicating alignment with the rising sun. This is not surprising since the sun was the emblem of the High God for the ancient Nilotes. The priests at the oldest known site of Horite Hebrew worship at Nekhen offered invocations to the High God and his son at dawn.

Archaeological evidence indicates that Horite temples were square with a "holy of holies" at the heart of the larger square. Such sacred spaces have been found at Petra, at Shechem, and near the Amman airport. This temple near the Amman airport was 6.50 meters wide (almost exactly 7 yards) and surrounded by a narrow corridor that was broken into six rooms of equal size. At the very center of the most sacred space was a round stone platform that either served as the pedestal of a stone pillar or as the base of an altar.

Horite Hebrew temples and shrines were located at water sources such as wells or along major rivers like the Nile. Cisterns have been found in many of the ancient temples. Solomon's temple had a cistern that held over 66,000 gallons of water (250 cubic meters). Moses was told to meet the king early in the morning when he went down to the Nile for prayer. 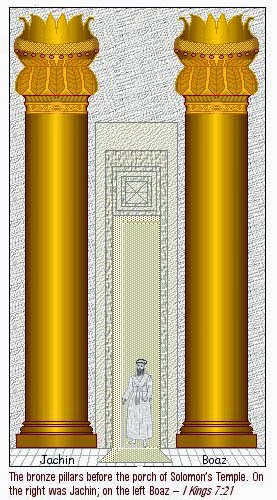 Solomon's temple was arranged on an east-west axis as was typical of most Horite temples. The Horites regarded the sun as the symbol of the Creator and Hathor-Meri as the mother of the "seed" of God, Horus. The temple of Hathor at Timna was oriented to the rising sun at the winter solstice. This temple was discovered at the southwestern edge of Mount Timna by Professor Beno Rothenberg of Hebrew University. David and Solomon were of the Horite Hebrew lines that can be traced from Genesis 4 and 5 to Joseph who married Mary, the daughter of the priest Joachim. Mary was "Miriam Daughter of Joachim Son of Pa-ntr (Joachim's mother) Priest of Nathan's clan of Bethlehem."

Long before the Pharaohs ruled Egypt the Horites were designated as royal priests. A tera-ntr refers to a priest. Th image above was found in Egypt by Flinders Petrie. It shows a Sethite temple priest among the Nilotic Annu and he is given the title of tera-neter, meaning priest devoted to God.