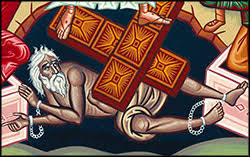 They took great care in the burial of their dead and never practiced cremation, as in the religions that seek to escape material existence (Hinduism, Buddhism, Jainism). Their greatest fear was the "second death" (Rev. 21:8) which occurs when the unity of body and spirit are not restored in the resurrection. They believed that the dead person continues as a shadow beyond death in Sheut (šwt), meaning shadow. The Hebrew word Sheol is derived from the ancient Egyptian word Sheut.

On Holy Saturday Jesus descended to Sheol to announce his victory over death. A Horite song found at the royal complex at Ugarit speaks of the descent of Horus, the son of God, to the place of the dead "to announce good tidings."

Among Abraham's ancestors the resurrection of the ruler meant the salvation of the people. He was expected to lead them from life to the greater immortal life that is beyond death. The people were believed to follow their risen ruler from this world to the next. Their immortality depended on the bodily resurrection of their priest-king.

Great care was taken in the burial of these ruler-priests. The prayers that were offered at the tombs are evidence that they hoped for resurrection. These prayers were written on the walls of the tombs and have been collected into volumes that can be studied today. The volumes include The Pyramid Texts (2400 BC), The Coffin Texts (2100 BC), and the Book of the Dead (1500 BC).

In these volumes there is a great deal of descent-ascent language. Utterance 214 of the Pyramid texts bids the deceased king to "ascend to the place where your father is." Utterance 214 also mentions the "Imperishable Stars" that raise the king aloft. The Imperishable Stars are connected to ascent to heaven. The third day resurrection of the son of God is expressed in the Pyramid Texts: "Oh Horus, this hour of the morning, of this third day is come, when thou surely passeth on to heaven, together with the stars, the Imperishable Stars" (Utterance 667).

The descent-ascent language is similar to what is expressed in Ephesians 4:8-10.

This is why it is written:

“When he ascended on high,
he took many captives
and gave gifts to his people.”

(What does “he ascended” mean except that he also descended to the depths of the earth? He who descended is the very one who ascended higher than all the heavens, in order to fill the whole universe.)

This reflects a layered cosmos with the firmament of heaven above as the place of God. The Apostle Paul speaks of being taken to the "third heaven" in 2 Corinthians 12. In Second Enoch, chapter 8, the third heaven is described as the heaven "whereon the Lord rests, when he goes up into paradise." Utterance 44 of the Pyramid Texts says, "Re (Father God) in the sky is gracious to you."

Generally, the cosmos is perceived as 3-tiered: the realm above (heaven), the plane of earth's surface (between the eastern and western horizons), and the "deep" under the earth, sometimes called "the pit" (Ezekiel 26:20). The dead are buried in the earth. They literally repose under the earth (Phil 2:9-10) until the general resurrection. They await deliverance from Sheol, the place of shadows.

Paul speaks of the ascent-descent in Romans 10:6-8.

Paul poses this rhetorical question to show that only God can fill all things in heaven and in earth and below the earth. "He who descended is Himself also He who ascended far above all the heavens, so that He might fill all things." (Ephesians 4:10)


Though much prayer was offered, and many rituals of purification were completed, none of the ruler-priests of the ancient world rose from the dead. Therefore, none had the power to deliver captives from the grave and to lead them to the throne of heaven (Psalm 68:18; Psalm 7:7; Ephesians 4:8).

On Holy Saturday, Jesus Messiah delivered good news to the spirits in Sheol. He showed them that death has been defeated and that their hope of resurrection is not in vain. He had shown this to the living before his crucifixion when he raised Lazarus from the grave. Jesus explained, “Our friend Lazarus has fallen asleep, but now I will go and wake him up.” (John 11:11)

The Horite Hebrew believed that heavenly recognition of a people depended on the righteousness of their ruler-priest. The ruler-priest was regarded as the mediator between God Father and the people. If God turned His face away from the ruler, the people suffered. If the ruler found favor with God, the people experienced abundance and peace.

The ruler-priest was expected to intercede for his people before God in life and in death. Were the ruler-priest to rise from the grave he could lead his people beyond the grave to immortality (eternal life). The ruler's burial was attended by prayers, sacrifices, and a grand procession to the royal tomb.

The New Testament speaks about Jesus as the ruler-priest. He is the firstborn from the grave and by his resurrection he delivers to the Father a "peculiar people." He leads us in the ascent to the Father where we receive heavenly recognition because we belong to Him. Jesus said, "I am the living bread which has come down from heaven. Anyone who eats this bread will live for ever; and the bread that I shall give is my flesh, for the life of the world." (John 6:51)

Indeed, God the Father has put everything under the feet of the Son, Jesus Messiah, who fills all things everywhere with himself." (Ephesians 1:23)


Messiah's descent to Sheol was to deliver that message to those who repose in the bosom of Abraham, the father of our faith. For we who believe "are of the faith of Abraham. He is the father of us all." (Romans 4:16)

Related reading: The Substance of Abraham's Faith; Sheol and the Second Death; The Bosom of Abraham; Cosmologies of the Ancient Near East