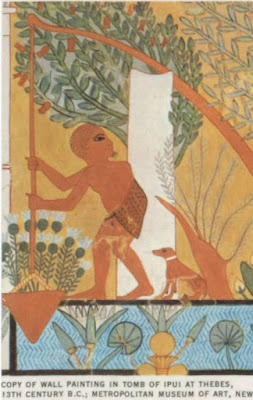 
The Egyptian writing system was a combination of phonetic and ideographic signs. Over different periods signs were drawn from different cultural experiences: Nubia, Kushite, etc.

Egyptian words are built of roots and affixes (prefixes, infixes and suffixes). Where a noun is immediately followed by another noun, the first noun serves as a descriptor (as in the English: police man, baby food). A particularly interesting suffix is -itti, indicating to a ruler. This appears as a title in Leviticus 16 in reference to the person who is to escort the scapegoat (the azaz-el) to the wilderness.

Many adjective-noun phrases are bound constructions in which the two words cannot be separated. This is often employed in the description of individuals (as in English: smooth talker). In Middle Egyptian such phrases specify either a good or bad character trait or quality.

Ancient Egyptian has nisba-adjectives, some of which are derived from propositions. The term "nisba" (meaning “relative”) is taken from Arabic grammar (’ismu-nisbati). In Egyptian nisba-adjectives are identified by the −j ending. Colors often have the nisba marker: blue - khesbedj; green - wadj

Many words represent a complex of related meaning. The word ˁnḫ is an example. It means live and it represents the ankh with its solar handle. The Sun was the emblem of the Creator Ra (Ani in Akkadian) and his son Horus (Enki in Akkadian). God Father and God Son are associated with the Sun. In this image from Angkor Wat Horus is perched on the mast of the solar boat in the form of his falcon totem. 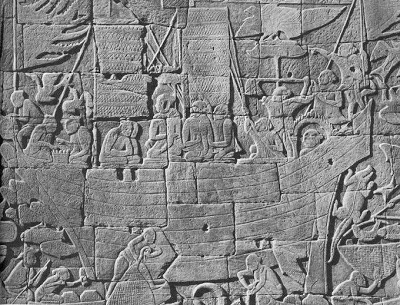 What follows is an alphabetically arranged list of Egyptian words, roots and affixes. Not being an expert, there are likely errors, but I hope that it will be helpful to students of Biblical Anthropology. I also suggest possible connections to African and Semitic words.

i - to be
iaru - reeds
ibw - shelter, refuge
imy-wnwt - hour/sky watcher
imn - create
imw - woe
imy - who is in, which is in
imyw - interior, inside of
imytw - in the middle, in the midst of
ink - first person singular pronoun
inw - tribute
i’nw - it is
i’pw - it is
iri - enact
irtiu - blue (also khesbedj - blue)
ir.t - eye (cf. Yoruba iri – to see)
ir.t rʿ - the eye of Ra (referring to the sun, the symbol of the High God)
irty - evil-doer
isw - weeds/reeds
iterw - the river, referring to the Nile River
ity - sovereign
iw - to come; is/are
iwnw (Iunu) - place of pillars (Heliopolis, Biblical On)
iwn - pillar
iwnn - sanctuary
iwnt - bow
iwnyt - pillared hall

-un(u) - we (cf. Hebrew plural masculine we - anu)
urshu - soldiers on watch (There may be a connection to Edomite Shasu.)