Who Were the Sumerians?


The evidence of anthropology, linguistics, DNA studies, and archaeology indicates that the Sumerians were likely dispersed cattle-herding Proto-Saharans who moved into the northern regions of Eden where the climate conditions in this riverine terrain during the African Aqualithic made the land ideal for grazing. The Proto-Saharans moved into Mesopotamia before 7000 BC. They developed a way of life that centered around the ancient water systems.

In Genesis, Eden is described as a vast well-watered world that extended from the source of the Nile in Ethiopia to the Tigris and Euphrates Rivers.

This Eden belt has an arc shape that corresponds roughly with the drought zone of the early 1970s when Lake Chad began to shrink rather dramatically and the smaller lakes of Egypt's desert virtually disappeared. The arc extends in three directions from the southern Sahara near the Benue Trough in Nigeria to the Nile and there bends up-river (south) to the equatorial East African rift valleys, and northeast toward present day Jordan, Israel, Syria, and Iraq.

The height of this ‘aquatic civilization’ came in the seventh millennium BC, when higher rainfall made rivers longer and wider, and caused lakes to burst their basins (Butzer et al., 1972; Zinderen Bakker, 1972).

Around 7000 BC, Lake Chad expanded enormously and overflowed via the Benue and Lower Niger rivers into the Atlantic. In East Africa the small lakes in the Kenya rift valley and in Egypt's desert rose and many of the water systems became connected. This was a time of flooding and we may assume that Noah lived during this time (c. 500-4000 BC) in the area of Lake Chad which is claimed by the natives to be Noah's homeland. Bor-No means "land of Noah." 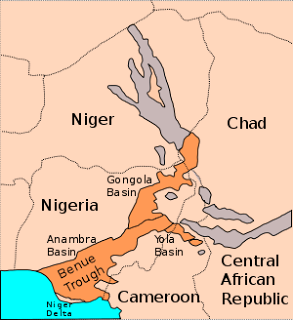 The Sumerians established settlements between the Tigris and Euphrates Rivers. Some of these were royal cities from which the surrounding region was governed by the king or the vassal of a high king. The rivers and their tributaries provided abundant water for sheep and cattle. The Sumerian herding of sheep and cattle is a recurrent theme in early Sumerian art and literature.

Sumerian relief from Ur showing sheep and cattle (c. 2600 BC).
The Sumerian city-states included Eridu, Nippur, Lagash, Kish, Ur and Uruk. These were shrine cities similar to those found along the Nile at Nekhen and Nekheb.
Among the Sumerians and Akkadians there resided a royal caste of priests who served the kings in their daily worship and also in funeral rituals. This practice was well established in ancient Egypt. Matthew J. Adams' comprehensive study (2003) addresses ancient Egyptian references to “royal mortuary complex attendants” designated by the non-compounded hntjw-š. He notes that land for plowing was set aside for the priest attendants of the "dual pyramid town" by royal decree (p. 27).
The ancient priests also served as royal advisors, astronomers, and temple architects. Beginning around 2000 BC, they supervised the construction of ziggurats in Mesopotamia. These were stepped temples, usually with seven tiers. The number seven was a sacred number for the anceint priests. The connection between the words for priest (Akkadian: abru) and the number seven is evident in the Nilotic (Luo) word for the number seven, which is abiriyo.

The word "Hebrew" is derived from the Akkadian word abru, meaning priest. Variants spellings include 'Apiru, Ha-biru and Ha-piru. The word refers to priests who served at the temples of the ancient Sun cities. The Sun temple was called O-piru, meaning "house of the Sun." The Habiru were already widely dispersed in the 14th-13th centuries B.C. Their dispersion was driven by a marriage and ascendancy pattern in which some sons were sent away to established their own territories.

One of these sons was the Kushite kingdom builder Nimrod. The language of Nimrod's kingdom was likely Sumero-Akkadian. Nimrod's cultural context is more Kushite than Mesopotamian as he was a son of Kush (Genesis 10:8). He is associated with Calah on the Tigris River, known today as the city of Nimrud. Calah (Akkadian 'Kalhu') appears to have been the northernmost point of his territory in Mesopotamia. Nimrod's territory extended along the Tigris between Calah and Ashur. Likewise, Terah's territory extended between Ur and Haran. In the Bible, we first meet Abraham in Ur because he was a descendant of Nimrod the Kushite kingdom builder (Gen. 10). 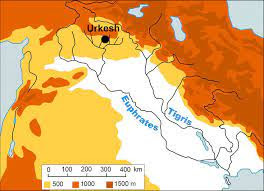 The shrine city of Urkesh (Tell Mozan) was between the Tigris and Euphrates rivers. It was inhabited before the time of the Hurrians. The artifacts there suggest that the Horite Hebrew priests influenced the religious symbolism. The Temple of the Lion is an example (2200 BC). 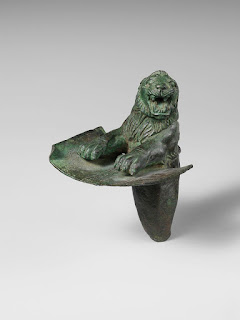 This bronze foundation peg in the form of a snarling lion comes from Urkesh. Pegs like this were placed in foundation deposits under temple walls. Their appearance in northern Mesopotamia represents the adoption of a practice from the southern Horites. The earliest lion imagery dates to Naqada IIC, circa 3200 BC. (See Nekhen News, p. 8.) Nekhen is the oldest known site of Horite Hebrew worship (4000 BC).
The Sumerians borrowed words from the Akkadians as early at 4000 BC. Some Sumerian words came into Hebrew through Aramaic. Abraham's brother Na-hor (of Horus, or devotee of Horus) ruled over the territory of their deceased father between the rivers of Mesopotamia. Three of the Egyptian Armana tablets identify this region as "Naharin" which means "Land of Horites." Genesis 25:20 and 28:2 call this region Paddan-Aram, meaning "field" or "land of Aram." (Also see Gen 25:20; 28:2, 5, 6, 7; 31:18; 33:18; 35:9, 26; 45:15). The link between Aram (Land of Arameans) and Naharaim (Land of Horites) is evident in the description of the region as Aram-Naharaim in Gen 24:10; Judg 3:8; and Ps 60:2/1.


Related reading: The Scope of Genesis 1-11; The Shrine City of Nekhen; Horite Mounds; The Substance of Abraham's Faith; The Ra-Horus-Hathor Narrative; Sun Cities of the Ancient World; The Prudhoe Lions