Elements of the Messianic Faith in Early Hinduism

Hinduism has many layers that developed over time. As a religion, Hinduism reached its zenith in the Axial Age (900-200 BC). Today there are at least 10 Hindu schools of thought. However, at the earliest level, the Vedic texts reveals the influence of the Horite Hebrew who moved into the Indus River Valley. The earliest known site of Horite Hebrew worship, Nekhen on the Nile, dates to 3800 BC.

The earliest civilization of the Indus Valley is that of Harappa (2500–1700 BC). In Dravidian Harappa means "Horus is father." This stone relief is at Agkhor Wat. It shows Horus in the form of his falcon totem perched on the mast of Ra's solar boat. The etiology of Anghor Wat is also telling. Wat means village, town, settlement, or shrine. Anghor is ankh-Hor which means "Long live Horus!" 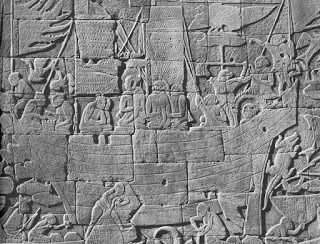 In Mannika's best-known work, "Angkor Wat: Time, Space and Kingship" she argues that the dimensions, alignment, and bas-reliefs of Angkor Wat speak of Suryavarman II as the divinely appointed king.

The idea of a universal king who is divinely appointed to rule is much older than Angkor Wat. It is found in the oldest layers of Hindu thought. The Sanskrit word cakravartin and the Pali word cakkavattin refer to a righteous king who rules over the entire world. His "messianic" rule is called sar-vabhauma. From Africa to Nepal the words sar and sarki refer to rulers and priests. The Akkadian word "sar" means king. This is the root of the royal title Sar-gon, which means High King or King of Kings. Nimrod's Akkadian name was Šarru-kīnu, which is usually translated “the true king.”

Messianic expectation appears to have originated among the Horite Habiru (Hebrew), a priest caste that served in the temples and shrines of the archaic world. The Habiru were in the service of the "mighty men of old" (Genesis 10), the early kingdom builders like Nimrod. Nimrod was a Kushite kingdom builder (Genesis 10:8) and the language of his territory was Akkadian.


At its earliest levels of development, Hinduism is older than Judaism, but not older than the Hebrew faith. The Rig Veda, the oldest Vedic text dates to between 1900 and 1200 BC, after the time of Abraham the Hebrew. Judaism emerges closer to 700 BC. The term "samhita" refers to the most ancient layer of text in the Vedas. Parts of the Vedic Samhitas constitute the oldest layer of Hindu tradition and include material that resembles Horite Hebrew concepts.

In the Rig Veda, for example, the number seven is sacred, and the Word of God is called Speech and is described as "a loving wife, finely robed." She resembles the Wisdom of Sirach (Ecclesiasticus), personified as a female (Sirach 24:8). In Sirach, Wisdom declares that she “came forth from the mouth of the Most High” as the first-born before all creatures.

In Srimad Bhagavatam 10:16 we find a parallel to Genesis 3:15 where we are told that the serpent's head will be crushed under the feet of the Woman's Son. The Hindu text reads: "The Ancient Man danced on the serpent, who still spewed poison from his eyes and hissed loudly in his anger, and he trampled down with his feet whatever head the serpent raised, subduing him calmly..." (Cited in Andrew Wilson, Ed. World Scriptures, p. 449.)

The same idea is found in Psalm 91:12-13 - "They will bear you up in their hands, that you do not strike your foot against a stone. You will tread upon the lion and cobra, the young lion and the serpent you will trample down."

However, this expectation was expressed about 1000 years before Psalm 91 in the Pyramid Texts. "Horus has shattered (tbb, crushed) the mouth of the serpent with the sole of his foot (tbw)" (Utterance 388)

Scholars from India acknowledge the Nile-Indus connections. The Indian archaeologist, B. B. Lal contends that the Dravidians came from the Upper Nile (Nubia/Kush). Lal writes:


"At Timos the Indian team dug up several megalithic sites of ancient Nubians which bear an uncanny resemblance to the cemeteries of early Dravidians which are found all over Western India from Kathiawar to Cape Comorin. The intriguing similarity extends from the subterranean structure found near them. Even the earthenware ring-stands used by the Dravidians and Nubians to hold pots were identical."

The Indian historian and anthropologist Bharatiya Vidya Bhavan has written: "We have to begin with the Negroid or Negrito people of prehistoric India who were the first human inhabitants. Originally they would appear to have come from Africa through Arabia and the coastlands of Iran and Baluchistan."

The Indian scholar Malati J. Shendge has concluded that the language of the Harappans of the Indus Valley was Akkadian, the language of the territory of Nimrod the Kushite. The Bible scholar, E.A. Speiser, found that names taken to be Indo-European were often labeled "Hurrian" [Horite] only to be identified eventually as Akkadian. The Horites were widely dispersed and spoke the languages of the people among whom they lived. Thus scholars today use terms like Hurro-Akkadian, Hurro-Urartian, and Canaano-Akkadian.

The Indian linguist Ajay Pratap Singh explains,"Comparisons of Akkadian and Sanskrit words yielded at least 400 words in both languages with comparable phonetic and semantic similarities. Thus Sanskrit has, in fact, descended from Akkadian."

Related reading: The Ra-Horus-Hathor Narrative; The Horite High Places; Who Were the Sumerians?; The Substance of Abraham's Faith; Horite Names From Nuzi (2700-2500 BC); The Shrine City of Nekhen