In 1949 the German philosopher Karl Theodor Jaspers coined the phrase “ die Achsenzeit” (“the Axial Age” or “the Axis age”) to describe a period between approximately 900 - 200 BC. Jaspers believed that during this age “The spiritual foundations of humanity were laid simultaneously and independently and these are the foundations upon which humanity still subsists today.”

Jaspers believed that societies around the world embraced the idea of all humans sharing a common humanity and therefore, are morally obligated to care for others. Jaspers argued that this new idea was prompted by lone cultural innovators such as Plato, the Hebrew prophets, Zarathustra, Buddha and Confucius.

Of course, these innovators did not come up with their ideas independently. Plato studied for thirteen years in Egypt and based some of his ideas on beliefs he learned there. The Hebrew prophets drew on the tradition of their Horim, the Horite Hebrew priests among Abraham's ancestors. This explains why it is difficult to set the period in history with any precision.

It is possible to point to the proliferation of religious ideas and practices during the Axial Age. These include the development and elaboration of the following world religions:

Recognizing the influence of Plato and Aristotle on early Christian writers, some scholars list Christianity. However, as Christianity is essentially about Jesus Messiah (Christ), it must be linked to the messianic expectation of Abraham's Proto-Saharan ancestors (c. 5000-3000 BC).

The Axial Age was an era of change as the archaic social structures weakened and in some places collapsed. The authority of deified rulers was questioned. Criticism arose of the abuse of the populace. There were realignments of archaic clan confederations. The Indo-Aryans were by now fully entrenched in northern India. Babylon was conquered by Cyrus the Great whose policies of religious tolerance encouraged new developments in Judea. Castes remained, but instead of being itinerant, as many of the lower castes (tanners, potters) were, they settled on the outskirts of cities. Also with urbanization came shop keepers who sold pottery and leather goods in the central market places so people no longer paid the tanners (the Tahash/Dravidian Madiga) and potters directly. The ancient shrine gods were replaced by urban gods, such as the "city god" Ch'eng Huang, who presided over civic affairs. Monotheism and atheism emerged, and in India, the ancient Horite foundations of the Vedas were submerged under an increasingly complex polytheism.

Mark W. Muesse, in his introductory volume on Hinduism, writes, "The Axial Age saw a prodigious output of critical ideas and the appearances of some of the greatest individuals known to the world." (p. 62) A tidal wave of intellectual energy swept the globe from Japan and China to Iberia and Gaul, and from the Alps to North Africa.


Historian Peter Watson considers the Axis Age to be the epoch when humanity's most influential philosophical and religious traditions became more or less institutionalized. Schools of thought emerged that delved into metaphysical questions and laid the foundations for natural science. For example, the idea of constant change or transformation was explored in both East and West (Heraclitus, 535 - 475 BC) and Lao Tzu/Tzi (d. 531 BC). The thought of these two philosophers is similar and reflects the intellectual effort to come to grips with the sweeping social changes of the 6th-3rd centuries BC.

The Pre-Socratic philosopher Heraclitus was an atheist. He proposed that all is one (monism), and the world has no beginning, but instead represents incessant transformations, like the constant flow of a river. He believed in a lawlike flux of elements that involves transformation within the unity. He notes the binary sets evident in the order on Nature. The pairs of apparent opposites (binary sets) such as male/female, day/night, high/low, and living/dying conform to the eternal logos (Word) that makes all things one. Opposites are necessary for life. They are unified in a system of balanced exchanges. Male cannot exist without female. Nor can female exist without male. Night flows into day, life into death. One cannot exist without the other, just as a river will lose its identity if it ceases to flow.

In the West the concept of the unity and periodic renewal of all things is represented by the ouroboros. The Greek word means "tail devourer." This image is found in ancient Egypt as early as the 14th century BC. Among the ancient Celts the image represented the connection between heaven and earth. 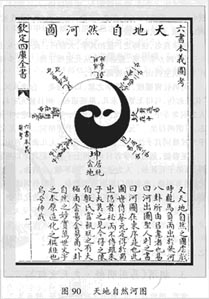 In the East, transformation, balance and the unity of all things is portrayed in the image of yinyang. Yinyang involves 3 related concepts. They are: (1) yinyang as the coherent fabric of nature and mind, exhibited in all existence, (2) yinyang as jiao (interaction) between the waxing and waning (flux) of the cosmic and human realms, and (3) yinyang as a harmonization process ensuring a constant, dynamic balance of all things.

Both ouroboros and yinyang are associated with alchemy, divination, and spells.

The concepts of monism, transformation and balance are found in the writings of the Axial Age Chinese philosophers who acknowledged the Confucian virtues, but criticized the rigid social structures of ancient China. Lao Tzu and Chuang Tzu (370-287 BC) are examples. Chuang Tzu is also known as Zhuangzi.

He who controls others may be powerful, but he who has mastered himself is mightier still.-- Lao Tzu

Flow with whatever is happening and let your mind be free. Stay centered by accepting whatever you are doing. This is the ultimate.-- Chuang Tzu

The principal Daoist texts are the Zhuangzi and the Laozi. Laozi means “Old (lao) Master (zi)” and refers to a Chinese sage of the 6th century BC. Some scholars believe him to be a legendary figure, but whether legendary or historical, he has been credited with the short book, the Laozi (The Book of the Way and its Virtue). The two texts reveal parallel ideas and themes, and share some phrases. Both books promote carefree wandering. A legend holds that Lao Tzu wandered as an old man through the Hangu Pass on an ox. Zhuangzi promoted wandering as a means of becoming one with "the Way" (Dào) by following nature. He said, "A path is made by walking on it."

Against the more traditionalist Confucians, these texts explore a way that leans toward anarchy, tolerance of others, laissez faire government, and sympathy with the common man. They reject the way of the archaic rulers who legitimized their reigns by claiming divine appointment. They also reject the binary worldview of the archaic world.

In Asian dualism the opposites are of equal value or strength. However, among the ancient Habiru/Hebrew one entity in the binary set was regarded as superior in some obvious way to the other. The sun is greater than the moon which merely reflects the sun's light. Males are bigger and stronger than females. Life is more precious than death. This enabled the prophets of old to discern God’s will by reading the signs in creation and directing the people toward the superior sign.

The ancients regarded heaven as more glorious than earth and sought to pattern their rule on earth "as in heaven." However, heaven and earth have equal power in dualism. Pao-p'u Tzu wrote, "As heaven and earth are the greatest of things, it is natural, from the point of view of universal principles, that they have spiritual power. Having spiritual power it is proper that they reward good and evil."

While Daoism stresses the unity and equality of the entities in a binary set, the biblical worldview stresses a distinction between the entities, and asserts that one entity is greater.

The question of flux points to another difference between Daoism and the worldview of the ancient Habiru. If everything is in a constant state of transformation, it is not possible to speak of a fixed order in creation as is asserted in Genesis 1; Psalm 104:19-20, and Jeremiah 33:19-36. Water undergoes transformation. It may be liquid, vapor or solid ice, but the essence of water remains the same. It is always H2O. Because the order of creation is fixed, entities can only be what they were created. Their outward form may change, but their essence and their ultimate purpose remains the same, as Aristotle recognized in his teleological conversations.