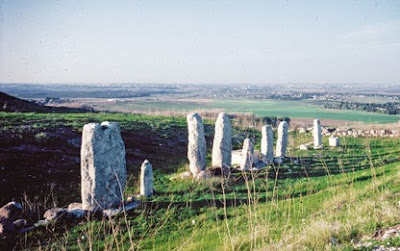 These standing stone at Tell Gezer date to the period of the standing stones erected on Salisbury Plain in England around 2500 BC. Photo: Dennis Cole

There were many religious practices among the Canaanites, but most of the shrines and temples were at elevated sites, called "high places" in the Bible. Most of the high places of the Judean and Edomite hills were under Egyptian control from about 2000 to 1178 BC.

In Hebrew, the high places and fortified mounds are called "ophel" (Hebrew עֹ֫פֶל). The root of the word ophel is OP and pertains to a complex of interrelated ideas: seeing (optic); armed guards (opiltes); walled towns (oppida), and sun shrines (O'piru) served by a caste of priests known in the ancient world as Abru, Ha'piru, Ha'biru and 'Apiru. Abru is the Akkadian word for priest, and the English word Hebrew come from the word Habiru.


Through archaeology and biblical anthropology, we have come to know a great deal about the peoples who lived in Canaan. Their shrines were built at high elevations near water systems and they were later fortified. They were masters of stone work and left behind standing stones of monumental proportions such as those at Tell Gezer.

The term "Canaanite" refers to many different peoples, some of whom were ethnically Nilotic. Genesis 10:15-19, traces the Canaanite peoples to an otherwise unknown descendant of Noah named "Canaan."


"Canaan fathered the Sidon his first-born, then Heth, and the Jebusites, the Amorites, Girgashites, Hivites, Arkites, Sinites, Arvadites, Zemarites and Hamathites. Later Canaanite clans spread out. The Canaanite frontier stretched from Sidon all the way to Gerar near Gaza and all the way to Sodom, Gomorrah, Admah and Zeboiim near Lehsa."


There were Horite Hebrew priests at many of the Canaanite shrines long before the Jews returned there from Babylonian exile. The Deuteronomist is a post-exilic source with an agenda. The Deuteronomist Historian presents the Canaanites as decadent, idolatrous, and deserving of being displaced from the land, even exterminated. Doubtless, there were practices surrounding fertility that were contrary to the purity code of the Horite Hebrew. These made it easy to cast all Canaanites as decadent.

The Deuteronomist mentions the destruction of Jericho, a pre-pottery Neolithic (PPN) settlement (10,500 to 9,500 BC) whose prestige as a fortified shrine city surpassed that of Jerusalem. There is evidence of competition here.

The Deuteronomist's main concerns were to establish Jerusalem as the only place of worship for Jews as a way of melding the people into a nation. The Deuteronomist encourages the destruction of all high places except Jerusalem. The targets to be destroyed were the bamot. Bamot is the plural form of the word bamah, meaning high or exalted. The word appears in names like Oholibamah and Obamah.

The Deuteronomist revises the history of Abraham's Horite Hebrew people to present a narrative about Moses and the Law that serves to strengthen Jewish identity.The focus is shifted from the archaic Hebrew rulers and their hope for a Righteous Ruler conceived by divine overshadowing and destined to rise from the grave to centralized worship at the Jerusalem temple. This source is also responsible for reshaping the Passover and Tabernacles into national observances. He promotes the power of the Jerusalem elite, and Israel’s possession of the land. This is the beginning of political Zionism.

Related reading: How the Deuteronomist Changes the Genesis Narrative; Afro-Asiatic Influences on the Deuteronomist Historian; Fundamentalism and Syncretism in Hebrew History; The Reconceptualization of Kingship in Deuteronomy; Ethnic and Cultural Diversity in the Bible