The iconoclastic Deuteronomist Historian makes a great fuss about the "high places" of ancient Palestine. These are represented as places of cultic debauchery and idolatry. Indeed, the high places of the archaic world - long before the time of the Deuteronomist - were fortified mounds, which in Hebrew are called "ophel" (Hebrew עֹ֫פֶל). These usually had a temple or a shrine under the supervision of a ruler and his royal priests.

For security, early human populations lived on sheltered elevated sites or fortified mounds. The root of the word ophel is OP and pertains to a complex of interrelated ideas: seeing (optic); armed guards (opiltes); walled towns (oppida), and sun shrines (O'piru) served by a caste of priests known in the ancient world as Ha'piru, Ha'biru (Hebrew) and 'Apiru. Some of the ancient fortresses were in the shape of a falcon, the totem of Horus. (The Shulba Sutras state that "he who desires heaven is to construct a fire-altar in the form of a falcon.")

Votive offerings at the high place shrines were called tama or tamata. This is related to an even more ancient word for fortified mounds: tamana. This place name (toponym) has been found in 188 countries and five continents. Over 1 million examples worldwide include Tamana-Irik, a village Gaulim in Papua New Guinea, Tamana Island in Micronesia, and the Tamana [ancient part] of the village of Palanka in Hungary.

Many Tamana antedate the high places of Susa, Körös-Tisza, the Indus Valley, Mesopotamia, Egypt, and China. The term Tamana means Stronghold in the Manding language of Africa, the Magyar language of Hungary, and the Dravidian languages spoken in India. Dr. Clyde Winters believes that the peoples who built the earliest Tamana belonged to an ancient confederation called Maa. Members of the Maa Confederation included the Magyar, ancient Egyptians, Elamites, Manding, Dravidians, and ancient Afro-Asiatic peoples. Winters believes that this explains the genetic and linguistic connections between these peoples. Dr Vámos Toth Bátor believes that these widely dispersed Tamana peoples were Proto-Saharans.

Abraham would have known the Chalcolithic high place temple at Ein-Gedi. It was constructed of stone and mud bricks and the roofing consisted of reeds. Typical of ancient sacred precincts, it was located near a permanent water source.

The Tuleilat al-Ghassul solar calendar dates to this same period and it has been suggested that it "would easily ﬁt the world vision of a society whose life was based on a solar religion."


The phylogenetic tree of Haplogroup R1b

DNA studies confirm that the Neolithic R1b cattle-herding peoples had already dispersed across Africa, the Levant, Anatolia, and the Black Sea area by 20,000 year ago. R1b is the most common haplogroup in Western Europe, reaching over 80% of the population in Ireland, the Scottish Highlands, western Wales, the Atlantic fringe of France, the Basque country and Catalonia. It is also common in Anatolia and around the Caucasus, in parts of Russia and in Central and South Asia. Besides the Atlantic and North Sea coast of Europe, hotspots include the Po valley in north-central Italy (over 70%), Armenia (35%), the Bashkirs of the Urals region of Russia (50%), Turkmenistan (over 35%), the Hazara people of Afghanistan (35%), the Uyghurs of North-West China (20%) and the Newars of Nepal (11%). R1b-V88, a subclade specific to sub-Saharan Africa, is found in 60 to 95% of men in northern Cameroon.

The three main branches of R1b1 - R1b1a, R1b1b, R1b1c - are Middle Eastern. The southern branch, R1b1c (V88), is found mostly in the Levant and Africa. The northern branch, R1b1a (P297), seems to have originated around the Caucasus, eastern Anatolia or northern Mesopotamia. R1b1b (M335) has been found primarily in Anatolia and may be the genetic marker of the Saka.

The Hindu text Matsya Purana claims that the Saka (called “Scythians” by the Greeks) ruled the ancient world for 7000 years. Another text, Mahabharata, designates “Sakadvipa” as the “land of the Sakas” in northern India. Assyrian documents speak of the Saka presence between the Black Sea and the Caspian Sea in the time of Sargon (722-705 B.C.)

Kar is another word for a sheltered or fortified site with shrine priests. Karnak on the Nile and Carnak in Brittany are examples. In Dravidian car means "sheltered together" and kari refers to a river. In Manding kara means "to assemble." In ancient Sumerian Ekur (𒂍𒆳 É.KUR) refers to a mountain house, pyramid, or elevated temple. This same triple mountain symbol has been found on seals from the Indus Valley civilization.

Since the Kar were places of burnt offerings, the term is often associated with charcoal and soot. The Turkish kara means "black." In Magyar korom refers to soot, as does the Korean word kurim. Among the Nilotic Luo kar specifies a place with boundaries. These connections suggest that the Karakorum Mountains which bridge Pakistan and China had fortified shrines with burnt offerings.

Many tamana have been identified in the Carpathian mountain range. The range is called Karpaty in Czech, Polish, and Slovak, and Карпати in Ukrainian, Carpați in Romanian, Karpaten in German, Kárpátok in Hungarian, Karpati in Serbian, and Карпати in Bulgarian. In Albanian karpë means "rock."

The oldest elevated settlements were near water sources. The oldest ophel in Jerusalem is near the Gihon Spring. Similar sites include Deir Tasi in Egypt; Jarmo in Iraq, and Tell Hassuna in Iraq. Of particular interest is the Paleolithic population that lived near the ravine or wadi known as Wadi-en-Natuf near Jerusalem. The Natufian population employed micro-flints, weapons, stone tools, and primitive agriculture. Artistic expressions included rock drawings and wall paintings, and they were sea travelers between 12,000 and 10,000 B.C. There are about 40 Paleolithic sites in the hills surrounding Jerusalem, many of them near Bethlehem.

Evidence of human habitation in the area of Bethlehem between 100,000-10,000 BC) is well-attested along the north side of Wadi Khareitun where there are three caves: Iraq al-Ahmar, Umm Qal’a, and Umm Qatafa. These caves were homes in a wooded landscape overlooking a river. At Umm Qatafa archaeologists have found the earliest evidence of the domestic use of fire in Palestine.

Surrounding Jerusalem, there are about 28 Neolithic sites that fit the same description: elevated and near water.

The top of mount Üetliberg, near Zurich, was a Neolithic fortified area with a height of 2690 feet above sea level. It was surrounded by a system of earth walls. Some 60,000 artifacts have been found here, the oldest dating to about 4000 BC. 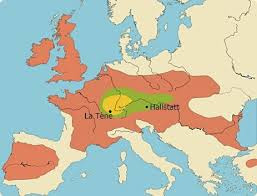 Iron Age high places are even more abundant, especially in ancient Gaul. The oppida of Gaul stand on the top of steep hills. Bibracte, on the summit of Mont Beuvray, is an example. It was the capital of the Celtic Aedui and an important opiddum in Gaul. The material culture of the Aedui corresponded to the La Tène culture (800 BC- 50 BC).

A famous high place in Armenia is Erebuni Fortress, also known as Arin Berd (Armenian: Արին Բերդ; meaning the "Fortress of Blood"). It was founded in 782 BC by the Urartian King Argishti I (ruled 785–753 BC) in Yerevan, Armenia. Built on top of a hill overlooking the Arax River, it served as a military stronghold to protect the kingdom's northern borders. 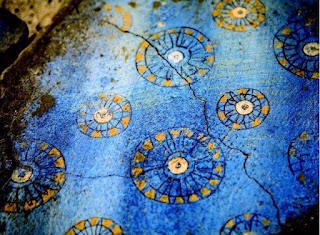 Shown right: A fresco of Erebuni Fortress (8th Century BC)

Dye used in the Erebuni frescos is composed of copper obtained from Armenian stone, which had been used in Mesopotamia since the 3rd millennium BC.

Related reading: Sanctuaries and Ancestor Worship at the Origin of the Oppida by M. Fernandez-Gotz; The Afro-Asiatic Dominion; Was Noah Mesopotamian or Proto-Saharan?; Stone Work of the Ancient World; The Relationship Between the Mande and the Japanese by Clyde Winters; A Kindling of Ancient Memory; Meroe on Orontes; Europe's Oldest Prehistoric Town Unearthed in Bulgaria; Log Cabins of Ancient European Cultures; Karampetsos, Karambet, Karoutes