Afro-Asiatic Influences on the Deuteronomist 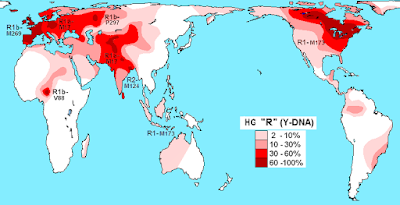 Map shows the dispersion of the peoples in Haplogroup R1b.
Among these are the rulers of the Afro-Asiatic Dominion.

I receive many questions about articles posted at Just Genesis and Biblical Anthropology. Here is a question that brings into focus the development of the Hebrew canon, or Old Testament.


Alice, I am interested in how Leviticus, Numbers, & Deuteronomy were influenced by the Afro-Asiatic Dominion. I can't find discussion of this at either of your blogs. Thanks.

Articles pertaining to this discussion are linked at the bottom of this post under related reading. In this post, I provide definitions of terms and explain how the Deuteronomist Historian is rooted in the religion of the Afro-Asiatic rulers, and where he departs from that religion.

To understand the Afro-Asiatic influences on the Deuteronomist, we must note the incongruities between the contexts of Abraham, the Horite Hebrew in Edom, and the later Deuteronomist whose theological perspective expresses the wounds of the Babylonian captivity.

Archaeogenetics has shown conclusively that a vast dispersion of Proto-Saharan peoples dominated the archaic world. These are in Haplogroup R, traced by Y-chromosome DNA, passed through the fathers. Another term for peoples in this group is "Euroasian" but this is misleading because the point of origin of these peoples is Africa.


The range of the dispersed Proto-Saharans extended from the Benue Trough and Lake Chad, to the Nile Valley, the Indus Valley, Southern Europe, and parts of Asia during the Holocene Wet Period. This represents a late movement of peoples out of Africa; a period of kingdom building by Afro-Asiatic rulers. I have termed this expanse the “Afro-Asiatic Dominion” because the words spoken by these peoples would have roots in the Afro-Asiatic language family. This is the oldest language group.

The Afro-Asiatic Dominion is older than the Axial Age (c. 900-200 BC) and the Vedic Age (c. 1500-500 BC). The rulers of the Dominion were the earliest kingdom builders on earth. These were the builders of huge stone temples such as that found at Göbekli Tepe, the two Ġgantija temples at Gozo in Malta, the stone temple at Baalbek in Lebanon, and the great pillared temples of the Nile.

The term "dominion" is appropriate because these territories were ruled by kingdom builders who shared a common religious tradition and common ancestors. They also had a common conception of divine appointment of rulers by the overshadowing of the sun. The sun was the emblem or symbol of the Creator God. The Deuteronomist points to this in the story of the bronze serpent on Moses's staff. This would have been a coiled serpent, a solar orb. The people were to look to the Creator's symbol for deliverance. The same image is used to represent the authority of bishops appointed to rule in the Church.

The rulers of the Afro-Asiatic Dominion are the rulers of the archaic world (BC 1000-2000). In the book of Genesis they are called the "mighty men of old" and are described as "heroes" and "men of renown." In Genesis 6:2, these rulers were presented as "sons of the gods" (elohiym), which means they ruled after their deified fathers. The deified rulers were believed to ruler by divine appointment, as with Moses. The Deuteronomist seeks to strengthen the authority of Moses in Exodus 22:28: "Thou shalt not revile the gods (elohiym), nor curse the ruler of thy people."

The burial practices of the archaic rulers reflect a common conception of the body and spirit, and the hope for immortality. The destiny of their people was believed to depend on the destiny of their ruler in the next life. Examples include the royal tombs of Alaca Hüyük in Anatolia (Turkey). At Horoztepe, in northern Anatolia, they built royal tombs dating from 2400-2200 BC. These are richly furnished with finely crafted artifacts in bronze, silver, and gold.

The mighty men of old built shrine cities at high elevations, temples, palaces, pyramids, and circles of standing stones. These "high places" were centers of religious ritual. In southern Anatolia, royal stone masons built Catalhoyuk beginning around 7500 BC. The word catal means fork and hoyuk means mound. This settlement was built on two mounds (east and west) and a channel of the Çarşamba River once flowed between them. The houses excavated in Catalhoyuk date between 6800-5700 B.C.

The Deuteronomist encourages the destruction of all high places except Jerusalem. The targets to be destroyed were the bamot. Bamot is the plural form of the word bamah, meaning high or exalted. (The word appears in names like Oholibamah and Obamah.) The Deuteronomist mentions the destruction of Jericho, a pre-pottery Neolithic (PPN) settlement (10,500 to 9,500 BC) whose prestige as a fortified shrine city surpassed that of Jerusalem.

These peoples maintained settlements at sheltered high places (tamana, kar, or oppidum) near water sources. These were the Sun Cities of the archaic world. At the center of these royal cities were the temple, the palace, housing for priests, and quarters for the royal guard. The temple typically was aligned to the solar arc and was called O'piru, which means "house of the Sun."

The sun temples include those found at Göbekli Tepe and Nekhen. Nekhen (called Hierakonpolis by the Greeks), is the oldest temple known to have association with Abraham's ancestors. The temple was located on the Nile, making it easy for temple officials to weigh and measure shipped cargo, and assess tolls on the vessels that docked there.

The priests who served at the ancient shrine cities were called 'apiru, ha'piru or Ha'biru. The English word Hebrew is a variant of Ha'biru. Abraham is called "Hebrew" (Ha'biru) in Genesis 14:13. The Harris papyrus speaks of 'apriu of Re at Heliopolis, the shrine of the Sun. Plato, who studied under a Horite priest at Memphis for thirteen years, wrote "Tell me of the God of On, which was, is and shall be."

The Deuteronomist is the final editorial hand on the Old Testament, especially Genesis through First and Second Kings. In these books there is a tendency to religious extremism expressed in willingness to commit genocide and iconoclasm. YHWH alone is to be worshiped, though the Creator was known by other names among archaic peoples. The people are to live in obedience to the prophet Moses (Deut. 18:18). Moses and the Law are to be the Jew's primary authorities. Jerusalem is to be the sole center of true worship, and authority over all aspects of Jewish life is vested in the religious leaders in Jerusalem.

The Deuteronomist revises the history of Abraham's Horite Hebrew people to present a narrative about Moses and the Law that serves to strengthen Jewish identity.The focus is shifted from the archaic rulers and their hope of a Righteous Ruler who would be conceived by divine overshadowing, to the Jerusalem cult. The Deuteronomist seeks centralized worship at the Jerusalem temple, and the reshaping of the Passover and Tabernacles into national observances. He promotes the power of the religious rulers in Jerusalem, and Israel’s rightful possession of the land. This is the beginning of political Zionism.

The Deuteronomist makes reference to the things of old, such as the tabernacle at Shiloh and the Ark of the Covenant, but there is no evidence that the Deuteronomist has first hand experience of these things. In his narrative, anthropologically significant details are entirely lacking. The editorial work of the Deuteronomist is from a much later time, the Neo-Babylonian Period (c. 700-300 BC).

The Deuteronomist writes from a context that is about 1500 years after the time of Abraham. This perspective does not align with the historical, archaeological, linguistic, and anthropological data concerning Abraham. It ignores his R1b cattle-herding ancestors who lived 4500 years ago in central Africa. The result is a disconnection between the Deuteronomist's portrait of Abraham and the earlier portrait of Abraham as a Horite Hebrew (Habiru) whose ruler-priest ancestors are named in Genesis 4 and 5. Among them are many righteous men: Methuselah, Enoch and Noah.

The Deuteronomist would have us believe that Abraham's ancestors did not worship the true God. Against all the evidence, he asserts in Joshua 24:2: “In olden times, your forefathers – Terah, father of Abraham and father of Nahor – lived beyond the Euphrates and worshiped other gods.” This simply is not true. Terah and his father Nahor were Horite Hebrew rulers who acknowledged the supreme Creator God whose symbol was the sun. Moses is one of their descendants, and the marriage and ascendancy pattern of Moses's family is identical to that of Abraham's father and grandfather.

A central theme of the Deuteronomist is that God abandons Israel because He is angry. He allows His chosen ones to fall before their enemies and to be taken as captives. The Deuteronomist seeks to explain why God would allow his appointed people to be carried into exile. The explanation given is the moral failure of the people and their leaders. Moses's half-brother Korah was a priest who, according to the Deuteronomist, died in the wilderness after he challenged Moses's authority. Moses's other brother was Aaron, also a priest. The Deuteronomist would have us believe that Aaron too failed in righteousness when he created an image of the divine calf overshadowed by the sun, a Messianic reference among Abraham's cattle-herding Nilotic ancestors. 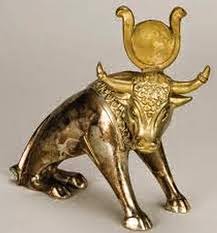 The Deuteronomist urges the smashing of images: "... thus shall ye deal with them; ye shall destroy their altars, and break down their images, and cut down their groves, and burn their graven images with fire." (Deuteronomy 7:5) Rulers who comply are praised. In the ancient world, the horse was associated with the sun and the Creator. During his reform, Josiah banned horses as a religious symbol. II Kings 23:11 reports that "He removed the horses that the kings of Judah had dedicated to the sun at the entrance to the House of the Lord."

Biblical rulers who did not kill their enemies and did no smash images are presented a moral failures who bring divine wrath upon their people. For the Deuteronomist that wrath is concretely expressed in the harsh treatment the Jews received at the hands of their Babylonian captors.

Related reading:  Contextual Incongruities in Genesis; How the Deuteronomist Changes the Genesis Narrative; The Afro-Asiatic Dominion; Boats and Cows of the Proto-Saharans; The Mighty Men of Old; The Serpent on Moses's Staff; Kushite Kings and the Kingdom of God; Stone Work of the Ancient World; Ancient Moral Codes