The Temple of the Winged Lions

It is said that the Temple of the Winged Lions was built to honor al-Uzza, a goddess of the pre-Islamic Quraysh. The temple stands on a promontory overlooking Petra and was accessible by ascending a massive staircase. The entrance was flanked by huge columns and the inner chamber has multiple columns, typical of the ancient Nilotic temples. The twelve columns surrounding the main podium were adorned with “winged lion” capitals.

In the ancient world, the lion was the animal totem of the rulers identified in Genesis as the "mighty men of old." This is why the names of many biblical rulers have the ar affix. It signifies both the lion and the ruler. Ari was an honorific for a man of distinction and power. The Hebrew word ari (or aryeh), the Akkadian aria, the Aramaic arya, and the Sanskrit word aryeh  mean "noble." In Genesis 49:9, Jacob refers to his son Judah as Gur Aryeh גּוּר אַרְיֵה יְהוּדָה, a "young lion."

The totem of Shobal's clan was the lion, fierce in it youthful strength. Shobal was one of the Horite Habiru kings named in the Genesis 36 ruler list.

The ruler Ar-pacshad is named in Genesis as one of Abraham's ancestors. His name means "happy ruler" or "happy lion." He ruled sometime in the period between 2445–2160 BC.

The narrative surrounding the goddess Uzza comes from a later time, about 200 AD, and mainly from Islamic sources. In his effort to eradicate idolatry Mohammed is said to have ordered the destruction of shrines dedicated to al-Uzza.Yet this monumental temple stands and was clearly a prestigious religious site in the time of Jesus when the Nabateans controlled the Arabian incense trade and a kingdom that stretched from Damascus to the Hejaz. 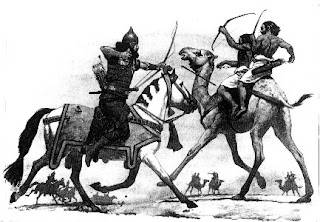 The Nabataean warriors had long wavy hair and wore feathers.

Was Uzza a goddess or a clan designation?

It is strange that to find the name Uzza associated with a goddess because Uzza is a man's name. In Hebrew the names Uzza עזא and Uzzah עזה apply only to men. A man named Uzza tried to stop the Ark from falling off a cart (1 Chronicles 13:7; also 2 Samuel 6:6.)

Another Uzza is mentioned in 1 Chronicles 8:7 as a son of Gera of Benjamin and a brother of Ahihud. Ezra 2:49 mentions a temple servant named Uzza who returned with Zerubbabel from Babylonian captivity.

There is also a man named Uzza associated with a palace garden in which king Manasseh is interred (2 Kings 21:18). Some think this might king Uzziah (2 Chronicles 26:23).

The root of the names Uzza, Uzzah, and Uzziah is Uz. The "land of Uz" is Job's homeland, according to Job 1:1. Uz is also associated with the rulers of Edom, the region where Petra is located. Uz was a grandson of Seir the Horite (Genesis 36).

It seems likely that the temple of Uzza was dedicated to Hathor, not a goddess named Uzza. The Horites of Edom venerated Hathor, the mother of Horus. The three trees symbolism at the temple of the Winged Lions likely represents the divine Triad: Ra, Horus and Hathor. Generally, the architecture at Petra reflects the Horite three-part structure of the Divine Triad.

The Nabataean kings, such as Harithath IV, bear the Horus name. King Harithath is called King Aretas in II Corinthians 11:32. Coins bearing the image of Aretas have been found in the Nabataean town of Avdat. He was called "King of the Nabatu, who loves his people" (Philopatris), and it was during his reign that the greatest of Petra's tombs were created.

The word Nabataean is related to Naba or Nabu, the guardian of scribes and prophets. This is the origin of the Hebrew word nabi, meaning prophet. The earliest scribes were Horite priests. The cult of Nabu was introduced into Mesopotamia and Babylon by the Kushites. Kushite kings sometimes bore the name Nabu, as with Nabu-shum-libur, an early Kushite king in Babylon and Nabu-apluiddina.

The first ruler of Petra was Obodas. This name is derived from the Edo/Edomite name for ruler which is Oba. Linguist Helene Longpre recognizes that Demotic Egyptian (7th-5th c. B.C.) and Nabatean Aramaic most closely correspond to Meroitic or Old Nubian. (Longpre, "Investigation of the Ancient Meroitic Writing System", Rhode Island College, 1999.) Demotic is the script of the Rosetta stone in the Ptolemaic period (BC 332-30).