Sun Cities of the Ancient World 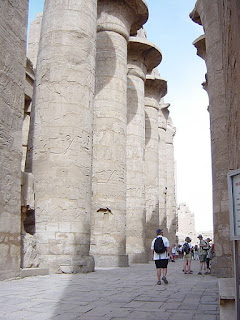 
Shrine cities of the ancient world were built near rivers and lakes and on elevated sites to avoid flooding. At the center of these royal cities were the temple, the palace, housing for priests, and quarters for the royal guard. The temple typically was aligned to the solar arc and was called O'piru, which means "house of the Sun."

The priests who served at the ancient shrine cities were called 'apiru, ha'piru or Ha'biru. The English word Hebrew is a variant of Ha'biru. Abraham is called "Hebrew" (Ha'biru) in Genesis 14:13. The Harris papyrus speaks of 'apriu of Re at Heliopolis, the shrine of the Sun. Plato, who studied under a Horite priest at Memphis for thirteen years, wrote "Tell me of the God of On, which was, is and shall be.

The people who lived at On called it Iunu, which means "place of pillars." There were many pillars bearing inscriptions to the high king, prayers to the Creator Re, and to his son Horus. Some pillars depicted great victories in war, the details of treaties, and dedications.

John Ogutu notes that in his Nilotic language of Luo, "O'mbiru, obiru refers to a small house built like a shrine or as a symbol among the Luo. A man who died before he could built his house would have the mourners erect one before his burial." The O'piru was a place where loved ones were memorialized.

According to Genesis 41:45, Joseph married into the royal priest family of Heliopolis. Study of the Heliopolitan cosmogony makes it apparent that Heliopolis was conceived as the sacred center of the primeval ocean, called Nun. The many pillars of the temple symbolized the connection between the waters below and the waters above (Gen. 1:7). Seeing as "he was a son of Nun" (Numbers 11:28), Joshua likely belonged to a Ha'biru clan associated with On.

The Prestige of Biblical On

Biblical On was perhaps the most prestigious shrine city of the ancient world. It was the geodetic center of Egypt. On was known for the purity of life of its priests. Plutarch wrote that the “priests of the Sun at Heliopolis never carry wine into their temples, for they regard it as indecent for those who are devoted to the service of any god to indulge in the drinking of wine whilst they are under the immediate inspection of their Lord and King. The priests of the other deities are not so scrupulous in this respect, for they use it, though sparingly.”

The Habiru priest purified himself before he entered the temple. His purification involved fasting, abstinence from sexual relations and alcohol, ritual bathing, and an intense period of prayer. Korah, Moses' half-brother, was a priest according to Numbers 16:17,18. His name means "shaved one." Habiru priests shaved their heads and bodies as part of the purification ritual.

Heliopolis means "city of the Sun" and there were other such cities dedicated to the Creator whose emblem was the sun. The shrine city of Baalbek in Lebanon, with its massive stones, aligned to On (see map above). The pyramids at Giza, Abusir and Saqqara were aligned to the obelisk at On.

King Tut established another Heliopolis at Thebes. The temple of Thebes was called "Heliopolis of the South." Thebes was the spiritual center of  Upper Egypt, and rivaled the importance of Heliopolis in the North.

Tutankhamun's cartouche bears the words heqa-iunu-shema, which is usually rendered "Ruler of On of the South." Heqa refers to the sceptre or shepherd's crook of the Egyptian rulers. Shema or ta-shema refers to Upper Egypt, the narrow valley extending south of Memphis to Abu on the First Cataract in Nubia. King Tut's sacred center was Thebes, between Memphis and Abu.

Related reading: Ancient Sun Temple Discovered in Cairo Suburb; The Unveiling of Joseph; The Shrine City of Nekhen; The High Places; Solar Symbolism of the Proto-Gospel

Email ThisBlogThis!Share to TwitterShare to FacebookShare to Pinterest
Labels: Habiru, Heliopolis, Joseph, On