Anthropological Evidence for the Exodus 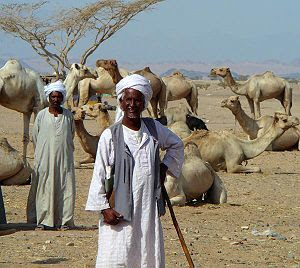 Beja metal-working chief in Sudan.
The Beja of Sudan/Nubia and the Taureq of Niger are genetic cousins and Nilotes.
They were one population but separated when the Taureqs moved west around 5000 years ago.

The Exodus is one of the most dramatic events in the Hebrew Bible and a central narrative for modern Jews. The dominant narrative comes from the Deuteronomist, about 1000 years after the time of Moses. According to this narrative, the enslaved Horim were forced to endure hard labor in Egypt. Moses was appointed by God to lead the people out of bondage and there was a miraculous escape across the Red Sea. Under the leadership of Moses, the Israelites received the Law and this marked the birth of a new people.

Many scholars question this narrative because there is little archaeological data to support it, and what evidence we have suggests that the slaves were not as oppressed by the Egyptians as the Jews were later by the Babylonians. It appears, for example, that Judah came and went between Egypt and the ancient metal-working site of Timnah. On one of those excursions, he had relations with Tamar (Gen. 38).

James K. Hoffmeier questions the enslavement of the Israelites in Egypt. The outstanding Jewish scholar Abraham Malamat (1922–2010) questioned the historicity of the Exodus narrative. He believed the event was more prolonged. The story of Israel in Egypt and the Exodus should be viewed as dispersed over time.

An inscription by the ancient Egyptian ruler Merneptah, discovered in 1896 by Flinders Petrie at Thebes, is an early reference to Israel outside of the Bible. An earlier reference found with the name “Israel" pushes the Israelite presence in Egypt back 200 years earlier to about BC 1400. That is only about 600 years after Abraham the Hebrew had a personal audience with the Egyptian king. The ruler with whom he met was likely Nebhepetre Mentuhotep II who reigned c. BC 2061-2010.  Only persons of high rank were permitted a personal audience with the King of Egypt.

A question asked about the Exodus concerns the metal work done by Aaron and Moses. Moses is credited with making a bronze serpent (Numbers 21:9) and Aaron made a golden bull calf like the one shown below. How is it that these refugees out in the desert had the technology to make bronze and gold castings? 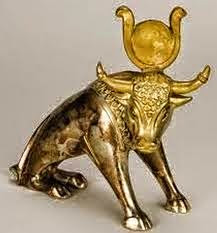 Anthropological studies provide a clear answer to that question. Metal work was a secret craft and metal workers commonly did it in the wilderness away from prying eyes. This is why Moses sought royal permission to go 3-days journey into the wilderness to worship.

In the ancient world, metal work was done only by certain castes. Moses and Aaron belonged to the caste of ruler-priests who were devotees of the Creator and his son Horus. The golden bull calf with the sun resting in its horns was an ancient symbol of Horus as the divinely appointed sacrifice. They were of the Horite Hebrew caste, the same caste to which Abraham belonged.

The Horites take their name from their devotion to the son of God who was called Horus. The mother of Horus was Hathor, the patroness of Horite Hebrew metal workers. This caste of priests was widely dispersed before Abraham's time. Some served rulers along the Nile River and others served rulers in Mesopotamia and in Edom. Some of the Horite Hebrew rulers of Edom are named in Genesis 36.

The Beja (Medjayu) are another group famous for metal work. These metalworking nomads from the eastern Nubian desert were devotees of Horus and Hathor until the 6th century A.D. They were associated with different Horite temples, especially on the island of Philak, and at Thebes. Today many Beja are Christians and some are Sufi Muslims.

The Inadan are another caste of metalworkers who forge beautiful figurines and crosses out in the desert. If a Taureg overlord attempts to do metal work, the Inadan launch a fake attack on his house to warn him not to transgress against their caste.
The Inadan claim to be related to King David. The Inadan chief maintains two wives in separate households on a north-south axis. The pattern of two wives characterizes the marriage system of the Horite Hebrew ruler-priests. (Read more about the Inadan in National Geographic, Aug. 1979, p. 389.) 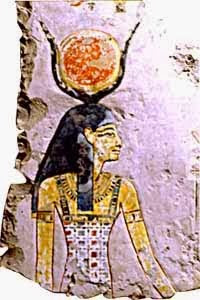 The bull's horns appear on images of Hathor, the mother of Horus. Hathor was the patroness of metal workers. A temple dedicated to Hathor was discovered at the southwestern edge of Mt. Timnah by Professor Beno Rothenberg of Hebrew University. Timnah is the site of some of the oldest copper mines in the ancient Near East. When Rothenberg excavated the site in the late 1960’s he found over 10,000 artifacts, nearly all of them offerings to Hathor. He also found half dozen unhewn stone pillars.
Another fascinating discovery at the Hathor Temple was a copper snake with a gold head. The association of copper with the serpent is evident is the relationship between the Akkadian words: sibbu - serpent and siparru - copper. The words "Hittite" and "Het" share the same primitive root for copper - nahas-het. As an adjective, HT means shining bright, like burnished copper. Nahash (NS) refers to a serpent. The HT copper smiths apparently ranged from Timna and Beersheba to Anatolia in Turkey. The serpent image was sacred for them, just as it was for Moses the Hebrew ruler who fashioned a bronze serpent and set it on a standard (Numbers 21:9).

Related reading: Moses' Horite Hebrew Family, The Nubian Context of YHWH; The Urheimat of the Canaanite Y; Why Cows Were Venerated in the Ancient World; Contextual Incongruities in Genesis; Moses's Wives and Brothers