What Does a Biblical Anthropologist Do?

Biblical anthropology seeks to understand antecedents and explores the cultural contexts and beliefs of Abraham's ancestors among whom the Messianic Faith first emerged. Until we better understand their religious beliefs and practices we will continue to impose incorrect or inadequate interpretations on the the earliest books of the Bible.

David Noel Freedman has said: “The Hebrew Bible is the one artifact from antiquity that not only maintained its integrity but continues to have a vital, powerful effect thousands of years later.”

Anthropologists and archaeologists alike turn to the Bible for clues and data that help us to gain a more accurate picture of biblical populations of the past. Very often this has led to wonderful discoveries!

A biblical anthropologist, like a biblical archaeologist, uses the Bible as a resource to gain a better understanding of the archaic world when "mighty men" established territories from Lake Chad to the Indus River Valley. They have been identified as the rulers of the widely dispersed R1b peoples.


There is nothing extraordinary about this venture, except that it requires reading the Bible differently than would a preacher or a theologian. This means that Bible commentaries written by Jews influenced more by the Babylonian Talmud are less helpful in establishing facts than the biblical texts themselves. Discrepancies between Talmudic interpretation and what the Bible reveals about Abraham's Habiru ancestors are significant and reveal that the core of Christianity is closer to the faith of Abraham than it is to the faith of modern Judaism. The Apostles criticized their Jewish brothers for departing from the faith of Father Abraham. Christianity is essentially about Jesus Messiah (Christ), and it is linked to the messianic expectation of Abraham's Proto-Saharan ancestors (c. 5000-3000 BC).

To give an example of how differently a biblical anthropologist reads the Bible, consider the “begats” of Genesis 4 and 5. Most readers of the Bible skip over this list of first-born sons because they find the names difficult and the information boring. An anthropologist, on the other hand, will look here for clues as to the kinship pattern of these Afro-Asiatic rulers. This involves making diagrams which are used to analyse the pattern to draw conclusions. I execute the diagrams following E.L. Schusky’s Manual for Kinship Analysis.

Besides kinship, a biblical anthropologist pays attention to details such as the location of sacred mountains and sacred trees, often identifying what the people would have regarded as sacred centers. We note that the oak of moreh, where Abraham pitched his tent, is called “the navel of the earth” in Judges 9:37. Moreh means oracle or prophet. The moreh's oak was halfway between the shrines of Bethel on the west and Ai on the east. Likewise, Deborah ruled from her palm tree half way between Bethel on the north and Ramah on the south. The oak was on an east-west axis whereas the palm was on an south-north axis, representing a gender reversal, and making a cross + shape.

Torah means 'that which is thrown by the hand' of the moreh or prophet. In Genesis 12:6, we read that upon his arrival in Canaan Abraham sought guidance from the oracle when he pitched his tent at the oak in Mamre. Torah, usually rendered guidance or instruction, was earlier associated with a prophet sitting under a tree.

A biblical anthropologist seeks data as does every scientist. The data often suggests a hypothesis which requires investigation in related disciplines such as genetics, climate studies, migration studies and linguistics. The Afro-Asiatic languages share many common roots and these languages were spoken by Abraham's ancestors. The Afro-Asiatic languages include Akkadian, Amharic, ancient Egyptian, Arabic, Aramaic, Assyrian, Babylonian, Berber, Chadic, Kushitic, Ethiopic, Hahm, Hausa, Hebrew, Omotic, Phoenician, and Ugaritic. The language of Nimrod's territory was Akkadian. Nimrod was a Kushite kingdom builder who established his kingdom in the Tigris-Euphrates River Valley. Abraham is descended from this Kushite ruler. 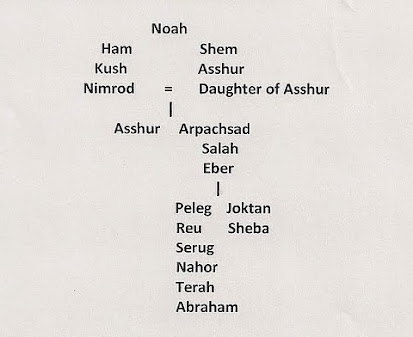 The languages of the Sudroid (the aboriginal populations who were displaced by Indo-Aryans) and Dravidoids of India is related to the languages spoken by Abraham's Nilotic ancestors. The Indian archaeologist, B. B. Lal, contends that the Dravidians came from southern Egypt and Sudan (ancient Nubia). Lal writes: "At Timos the Indian team dug up several megalithic sites of ancient Nubians which bear an uncanny resemblance to the cemeteries of early Dravidians which are found all over Western India from Kathiawar to Cape Comorin. The intriguing similarity extends from the subterranean structure found near them. Even the earthenware ring-stands used by the Dravidians and Nubians to hold pots were identical."

A biblical anthropologist will not be surprised to find that the word sakti which refers to wine in Tantric use at the harvest moon celebration in India, is the linguistic equivalent of the Falasha word sarki, which refers to the harvest moon festival in East Africa. Sarki also means ruler among the people of Kano (Nigeria). The Yoruba tell of a warrior named Bayajida who killed a snake called "Sarki" about 1,000 years ago. The root sar refers to rulers. Sar-gon means Most High King or King of Kings. Among the Igbo the Christ is called the "Great Serpent." Jesus self-identifies as such when He refers to His crucifixion as being lifted up, as Moses lifted the bronze serpent in the wilderness, and all who looked upon it were saved. Biblical anthropologists make connections such as these.

Sarki are also a priestly caste in the Orissa Province of India. They are the ones who sacrifice animals and tan the hides. God is the first sarki in Genesis 3:21 where he sacrifices animals to make coverings for the man and the woman. Sarki also live as ‘Haruwa’ in the Tarai region of Nepal. The word Haruwa is equivalent to the ancient Egyptian word harwa, meaning priest.

Another word for priest is the Hebrew ‘Kohen’, equivalent to the Arabic ‘Khouri’ or ‘Kahin’ and the Persian ‘Kaahen’ or ‘Kaahenaat’ which is translated "timeless being". This word ‘Kahenat’ means priest in the Ethiopian Church.

Moses married a Kushite bride, not unusual for Egyptian rulers of that time. One of Abraham's most famous ancestors was Kush, the father or Ramaah and Nimrod (Gen. 10).

The kinship of many related biblical peoples is evident in the common roots of their Afroasiatic languages. Consider these examples:  The word for head or chief has a common root in Akkadian - rishu; Amharic and Arabic - ras;  Aramaic, Archaic Assyrian, and Hebrew - resh, and Yoruba - orisha (head ancestral spirit).

In addition to linguistic studies, the biblical anthropologist studies maps. There are many maps available, though the accuracy is not always good. Maps must be studied to identify places associated with clans and rulers and to study their proximity to related peoples. Significantly, many key names in Genesis do not turn up in Mesopotamia, but are found in Africa, Arabia, and Canaan.

A biblical anthropologist finds anthropologically significant data in the Bible which is used to construct a more accurate picture of Abraham and his Proto-Saharan ancestors who are listed in Genesis 4 and 5. We discover that there were ruler-priests long before the time of Aaron. The Bible provides an enormous amount of information about this priest caste of the archaic world. They are called 'Apiru, Abru, Habiru/Hapiru in ancient texts.

The Habiru (Hebrew) devotees of Horus represent a very ancient priest caste. They can be traced back to at least 4000 B.C. to one of their shrines at Nekhen on the Nile. The temple there is dedicated to Horus, the son of Ra, the High God.

Another Horite shrine was Heliopolis. The Harris papyrus speaks of 'apriu of Re at Heliopolis, the shrine of the Sun. The term is related to the Akkadian word abru, meaning priest. Joseph married into this royal priest line when he married Asenath, the daughter of the priest of On. On is Heliopolis and it was one of the most prestigious shrine cities of the ancient world.
The Horite priests of Heliopolis were known for their sobriety and purity of life, and for their  meticulous devotion to the High God (Ra/Ani) and his son (Horus/Enki),
Among Abraham's Nilo-Saharan ancestors, Hathor, the mother of Horus, conceived when she was "overshadowed" by the Sun, the emblem of the High God Ra. This is the origin of Messianic expectation. The Ra-Horus-Hathor narrative is a very ancient form of the proto-Gospel. Hathor is an archetype who conceives by divine overshadowing, just as the Virgin Mary conceived by divine overshadowing, as the Angel Gabriel explained.
The angel answered, “The Holy Spirit will come on you, and the power of the Most High will overshadow you. So the holy one to be born will be called the Son of God."

Mary's father, Yoachim, was descended from the Habiru (Hebrew) priests of old. The Horite and Sethite Hebrew priests were circumcised and clean shaven. There was great emphasis on their ritual purity, especially in preparation for their term of service at the shrine or temple. Plutarch wrote that the “priests of the Sun at Heliopolis never carry wine into their temples, for they regard it as indecent for those who are devoted to the service of any god to indulge in the drinking of wine whilst they are under the immediate inspection of their Lord and King. The priests of the other deities are not so scrupulous in this respect, for they use it, though sparingly.”

The Hebrew rulers had two wives, both half-sisters and patrilineal cousins. These were the daughters of priests, as the Hebrew practiced endogamy. It is likely that Joseph's wife Asenath was a cousin, just as Zipporah was Moses's patrilineal cousin. Biblical anthropology has made great progress in identifying the marriage and ascendancy pattern of the early Hebrew.

This brief overview should provide a general picture of what a biblical anthropologist does and I hope it will encourage some to consider working in this field. It is truly wide open and potentially very fruitful. This is a field in which to make your mark! At the rate in which archaeological discoveries are now being made in Africa and the Ancient Near East (ANE), the material evidence for understanding the cultural context of Abraham and his ancestors is falling into place. Their influence on the diverse biblical populations is becoming clearer.