People are talking about the heat and strange weather this summer. Stephen Hawking thinks that it is time to abandon earth because of global warming and the threat of the Sun devouring Earth. You hear weather specialists talk about El Niño and La Niña, about ocean temperatures, about wind currents, and about the shrinking Arctic ice cap, but nobody is talking about the expanding Perito Moreno glacier in Argentina and Pio XI glacier in Chile.

One factor that nobody is talking about is the cycle of Earth's Great Year which brings fluctuation in the great river systems and affects sea levels. "The expansions and contractions of those environments have pretty profound effects on life on Earth," says Shanan Peters, a University of Wisconsin-Madison assistant professor of geology and geophysics. Over the course of hundreds of millions of years, the world's oceans and rivers have expanded and contracted in response to climate change and the shifting tectonic plates.

About 150,000 years ago there was a major uplift of the Angolan ridge in the area of the equator in Africa. This meant a permanent supply of water running to the Upper Nile and prompted migration to that area and the building of a great Nubian (Sudanese) civilization.

Between 12,000 and 8,000 years ago all of the region between Lake Chad and the Nile was wet. The climate had changed, ushering in years of persistent, heavy rains. The Nile was transformed from a slow stream into a roaring river with mile-deep gorges. This was the beginning of the wet period that would turn the Sahara into vast grasslands able to support elephants, antelopes, gazelles, ostriches, giraffes, and hyenas.

Lakes formed in the basins, large enough to support fish, crocodile and hippopotamus. Early hunters camped along the lakes, as evidenced by heaps of domestic refuse at many sites along the lakeshores. Lake Chad filled and merged with the Mega-Chad Sea, creating a body of water comparable in size to the state of Sudan. The overflow spilled southwest out the Benue River to the Atlantic.

The flood of Noah likely occurred during the peak of the rainy period when Mega-Chad would have been 5 times the size of Lake Superior. The surrounding land was spongy and there was great flooding at the confluence of the Niger, Benue, Yobe and Osimili Rivers. The floodwaters created a disaster of such proportions that it is still remembered. Rainbows would have been a common sight over the region due to rising mists.

A black mahogany dugout from this period was found in the Land of Noah buried at a depth of 16 feet under clays and sands whose alternating sequence showed evidence of deposition in standing and flowing water. The Dufuno dugout (shown below) is 8000 years old. By comparison, Egypt's oldest boat is only about 5000 years old. 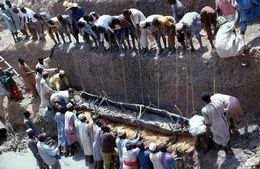 About 12,000 years ago, the Nile connected to the Chadic and Niger water systems through a series of shallow lakes in the Sahara Desert. Because of this, a common plant and animal species is found in all three river systems.

The Lake Chad region is the location of Noah's flood, and the area is called "Bor-Nu", which means Land of Noah. Today the area is dry, but rains are returning to the Sahara. West Africa is receiving abundant convective rainfall also.

Now that Earth's Great Year is beginning a new cycle, the great water systems of Noah's day may again approach the size they once were, as indicated by their footprints seen from space.

This year the Indus River in Pakistan seems to be seeking its old boundaries. NASA photos reveal that in a matter of a few months the Indus has swollen to the proportions it was known to have 10,000 years ago.   See the contrast from one year ago. 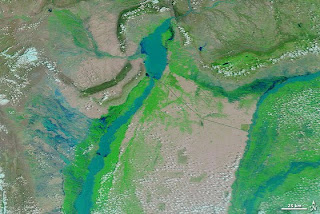 (To see other graphs that confirm this, go here.  To read more about axial precession, go here.)

We are seeing verifiable climatic changes that involve wide distribution of water in what are today some of Earth's driest regions. With the close of the sidereal cycle dry places that were formerly under water may be returning to wet conditions.Such fluctuations can explain Noah's flood in the area of Lake Chad and suggest a factor in the decline of the ancient Afro-Asiatic Dominion.  As the major river systems of the ancient Near East and Africa shrank, the Afro-Asiatic rulers found it more difficult to control larger territories that were once joined by water.

If the picture given us in Genesis is taken seriously, we must recognize that the swelling and shrinking of earth's major water systems brings political as well as ecological change. The ancient Afro-Asiatic rulers lost control when the great river systems they controlled began to shrink. It was no longer possible to control huge areas of land since they were no longer connected by the water ways that made swift movement possible. Today the devastation in Pakistan is of such huge proportion that it could easily bring down that government. Katrina continues to have political impact on American leaders 5 years later. There is a good reason for the world's leaders to be concerned about global climate change, but they are foolish to think that they can control a 25,000-28,000 year cycle like Earth's Great Year.


Editor's Note
Nature News reported on recent studies that cast doubt on a comet as the cause of the Younger Dryas Ice Age, which took place 13,000 years ago. A study posted in the journal Nature has found that the period may have actually been one of warming and thawing of glaciers in the Southern Hemisphere. While the change in ocean temperatures at the time did block the Gulf Stream, preventing warm water from reaching the colder north, it seems that other climate altering currents, known collectively as the conveyor belt, were also stopped from bringing enough deep, cold water to the south, resulting in a thaw.

An international team led by Michael Kaplan of the Lamont-Doherty Earth Observatory in Palisades, New York, studied a part of New Zealand called Irishman Stream, an area littered with soil deposits and boulders displaced by glaciers during the ice age, to see what effects the Younger Dryas period had on the area. By doing chemical analysis on the rocks in the area, the team found that the rocks were deposited as the glaciers were retreating. Further analysis of the isotope beryllium-10 found that the rocks were first exposed to open air between 11,100 and 13,700 years ago, meaning these glaciers were melting away well within the Younger Dryas period that sent much of the Northern Hemisphere into a near-glacial freeze. For more, see the report from ScienceNOW.