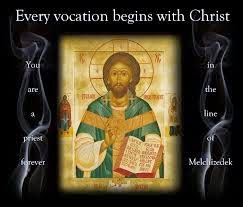 In researching how priests were ordained in the time of Jesus Christ, I found that the rule set down by the Sanhedrin required three ruler-priests to give consent, but only one was required to be physically present for the laying on of hands. The other two could give consent in writing.

As far as we know, none of the Apostles were priests. Therefore, they were not qualified to ordain priests according to the ordination practice that they knew.

Instead, their ministry was evangelistic and pastoral. They bore witness to the long-awaited Son of God, the Messiah. This idea was developed by Cardinal Joseph Ratzinger who wrote:

Certainly, the Apostles commissioned missionaries, elders, and deacons by the imposition of hands. Some of those elders served as Eucharistic ministers. None is described in the New Testament as offering blood sacrifice. We may say that the need for sacrificing priests no longer existed since Christ’s blood sacrifice fulfilled all the Law. That very fact tells us that there is continuity between the Old and the New as much as there is distinction between them.

There certainly is continuity in the requirement of three to consent to ordination. The Apostolic Canons of the Eastern Orthodox require that the consecration of a bishop must be accomplished by at least three. The same applies to episcopal consecrations in the Roman Catholic and Anglican churches. There is a precedent for this in history. In the Sanhedrin ordination was conferred by a court of three.

The doctrine of Apostolic Succession received from Rome remains problematic since none of the Apostles were priests. Apostolic succession addresses who has authority over the flock, but it does not shed light on the continuity of the rules for ordination to the priesthood.

However, when we come to ancient Britain, we find a priest among Jesus followers who was qualified to ordain according to the Sanhedrin rule: Joseph of Arimathea. After we remove the embellishments of the Middle Ages we are left with this picture: Joseph was in southern Britain where he consulted as a mining expert. He is said to have visited the Ding Dong mine in Cornwall. (Lodes from that mine were worked well before the time of Abraham.) Mining experts also excavated cave tombs such as the one Joseph provided for our Lord’s repose. It is likely that Joseph saw the need for priests among the Messiah’s followers in Britain and that he ordained a few with the consent of two other members of the Sanhedrin. If this is so, the priesthood in England predates the papacy of Linus which began in A.D. 64.

The Roman narrative has dominated the conversation for so long that the deficiencies of the account are rarely questioned. The empowering of the Apostles cannot be understood as Jesus ordaining these men to the priesthood. This may explain why there is no documentation of the chain of succession during the very earliest days of the Church. There is documentation tracing the chain of consecration from the early 2nd century, but before that none. The Vatican acknowledges this fact. The 1973 International Theological Commission on Catholic Teaching on Apostolic Succession states:

“The absence of documents makes it difficult to say precisely how these transitions came about. By the end of the first century the situation was that the apostles or their closest helpers or eventually their successors directed the local colleges of episkopoi andpresbyteroi. By the beginning of the second century the figure of a single bishop who is the head of the communities appears very clearly in the letters of Saint Ignatius of Antioch, who further claims that this institution is established "unto the ends of the earth".

During the second century and after the Letter of Clement this institution is explicitly acknowledged to carry with it the apostolic succession. Ordination with imposition of hands, already witnessed to in the pastoral Epistles, appears in the process of clarification to be an important step in preserving the apostolic Tradition and guaranteeing succession in the ministry. The documents of the third century (Tradition of Hippolytus) show that this conviction was arrived at peacefully and was considered to be a necessary institution.” (INTERNATIONAL THEOLOGICAL COMMISSION, Catholic Teaching on Apostolic Succession, 1973)

Rome is in error when it claims to have brought Christianity to Britain. Father Louis R. Tarsitano expressed the truth when he wrote, "…it is a simple error of fact to claim that the Anglican Church 'began' in the Reformation, or even with the late 6th century mission of St. Augustine to evangelize the newly arrived Anglo-Saxon pagans. The bishops of a five-centuries-old Christian Church met Augustine on the beach.” (Of Forms and the Anglican Way)

The preamble of a 1421 letter by Abbot Nicholas Frome to Henry V asserted that Joseph of Arimathea and his companions were sent to England in A.D. 63 by St. Philip, who was on mission to Gaul (France). It was copied from materials found in William of Malmesbury’s interpolated De Antiquitate Glastonie Ecclesie, but the date of 63 A.D. for the arrival of Joseph of Arimathea seems too late. Gildas's De Excidio et Conquestu Britanniae claims that Christianity was already in Britain by A.D. 47.

The followers of Jesus Christ are divided into so many groups that it is impossible to name them all. Many yearn for visible unity, at least between the sacramental bodies. Visible unity requires a common commitment to truth regardless the cost to any single institution. In my view, Anglicans should question the Roman conception of Apostolic Succession which has been fashioned for one purpose: to justify Rome's claim to universal authority. Instead, we should claim as a ground for unity the dignity and antiquity of our Anglican patrimony which demonstrates continuity between the priesthood of the Old Covenant and the priesthood of the New Covenant.

Concerning the validity of Anglican orders, E. J. Bicknell wrote (1919), "The Roman arguments rest upon two great assumptions. First, that Rome is at all times infallible, and therefore her teaching at any time about the meaning of the priesthood must be accepted without question. Secondly, that Rome has a divine right to implicit and universal obedience, and therefore any change in the form of service without her consent shows a contumacious spirit. Neither of these assumptions can be granted, and without them the whole argument collapses."

The only ground for visible unity is power surrendered to Truth.

Related reading: Cory Byrum, "Even As We Are One": On the Unity of Christ's Body; Joseph of Arimathea, Was King Arthur a Descendant of Nilotic Rulers?; The Priesthood in England (Part 3);