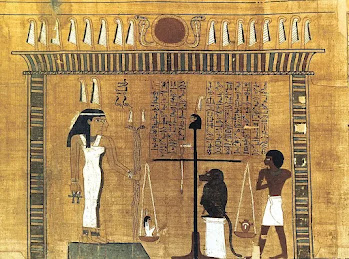 Entrance to the afterlife depended on weight of the heart, a belief that spread to the Indus Valley.

In ancient Egypt the rule of judges and enforcement by police existed from as early as the Predynastic Period (c. 6000- 3150 BC). The Nile Valley was littered with thousands of small communities in which local elders serves as judges.

Later, the Pharaoh was supreme judge as the representative of the High God and his son Horus. The second highest legal authority was the Pharaoh's vizier. In the Book of Genesis, we read that Joseph became the vizier and his high rank gave him authority to punish crimes.

One of the earliest lawgivers in Egypt was Menes (2930-2900 BC). He administered justice and issued edicts which were designed to improve food production and distribution, guard the rights of ruling families, improve education and enhance knowledge of the natural world through geometry and astronomy. Weinman’s sculpture on the South Wall Frieze of the US Supreme Court building depicts Menes as an early lawgiver.

There are records of an office known as "Judge Commandant of the Police" dating to the Fourth Dynasty (2613-2492 BC).

The earliest law codes were of a religious nature and implemented by rulers who were served by royal priests, some of whom were certainly Hebrew. (In Akkadian the Hebrew ruler-priest caste was called Abrutu, from the Akkadian word abru, meaning priest).

The Code of Ani is a negatively worded moral code, like the Ten Commandments. It dates to c. 2500 BC and is contemporaneous with The Reforms of Urukagina (Sumerian, 2500-2350 BC). His reforms are particularly concerned with the governance of the land and rules relating to burials. The text details the role of the king as protector of the weak. However, the Law of Tehut, a nome of Lower Egypt, dates to about 500 years earlier.
Ancient law codes have a religious quality because religion and government were never separate in the ancient world. Among ancient populations religious laws governed every aspect of the community’s life. Religion and the rule of kings and priests contributed to social stability. Those who violated the law of kings faced punishment. The violation of religious taboos required repentance, sacrificial offerings, and cleansing from the priests. Serious violations (taboos) could result in banishment or execution. Adultery and homosexual relations were regarded as especially serious. These are mentioned in the Egyptian Book of the Dead and the Moral Code of Ani.

Those who broke a taboo by using something they are not to use or touch or by speaking words that they are not to speak, were punished by imprisonment, publicly shamed, or banished. Muttering incantations against the king or blaspheming the throne was a serious offense. The Code of Ani specifically mentions this: "I have not worked witchcraft against the King."
The Pharaoh had the same spiritual and legal authority in his Kingdom as the High Priest had in ancient Israel. Innocent parties were to remain in the city of refuge until the death of the High Priest, at which time the party could return to his people, and he was not to be harmed by any act of retribution.

If a fugitive died in a city of refuge before the High Priest died, he was buried in the city of refuge. His body could be moved for reburial only after the high priest died. This suggests that the legal precedent for treatment of fugitives in the cities of refuge predates Moses. Moses returned to Egypt after the Pharaoh died (Exodus 4:19).
King Nubkheperra Intef (1571-1565 BC) had a Hyskos rival who apparently sought refuge in the Temple of Min. That temple was under the authority of the priest Teti, son of Minhetep. Intef responded by ordering an audit of the temple to uncover irregularities. Whether Teti was guilty of harboring a fugitive is not certain, but Teti was removed from office, lost all royal benefits to himself and his family, and his sons were no longer able to fill the hereditary office. Similar penalties were applied to an Egyptian ship captain who harbored a political fugitive about 240 years earlier (D. Lorton, p. 22).
Among the Kings of Egypt, the more serious the offense, the more terrible the punishment. The Hayes Papyrus of the Late Middle Kingdom (3100-2250 BC) refers to five laws dealing with fugitives. Some fugitives were branded (D. Lorton, p. 18), and some were banished (like Cain).

The most serious crimes were those against the throne: robbing royal graves, insurrection, and hiding political enemies. The punishment for robbing grave goods and selling them was impalement, followed by dismemberment. Insurrectionists were sometimes fed to the crocodiles, which would result in the second death since the body and the soul could not be reunited in the afterlife.
Related reading: Ancient Moral Codes; The Six Cities of Refuge; What Fugitives Faced in the Cities of Refuge; Ancient Egyptian Law
Posted by Alice C. Linsley at 5:49 PM