The Bible on Transvestism

Transvestism was a practice among adherents to the Dionysian mysteries. It was especially common in Corinth. It appears that the Apostle Paul sought to address this in 1 Corinthians 11.

In 1 Corinthians 11, Paul speaks of authority in terms of the order of creation and a chain of command. The head of Christ is God. The head of the man is Christ. The head of the woman is her husband. He then explains how Christian men and women are to express submission to divine authority by honoring their God-given identity as male or female.
Men are not to wear long hair and veils. Women are to cover their long hair with veils.
Paul begins the eleventh chapter by saying that the Christians in Corinth are to imitate him as he imitates Christ. He then explains that they are to uphold the tradition which he has received and passed to them. Doubtless, the tradition that rabbi Paul had in mind prohibited transvestism in Israel. “A woman shall not wear anything that pertains to a man, nor shall a man put on a woman’s garment; for whoever does these things is an abomination to the LORD your God.” (Deuteronomy 22:5)
It appears that Paul was addressing two issues in 1 Corinthians 11: men and women should honor their gender roles; and the Christians in Corinth should not adhere to Dionysian transvestism.
Transvestism is an expression of rebellion against God's order of creation and as such, it should not be practiced by the followers of Jesus Christ. 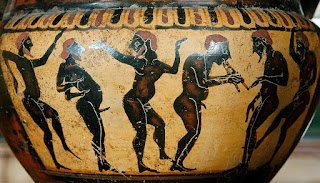 Dionysian revelers
1 Corinthians 11 is consistent with Paul's general teaching about Christian morality. The images that appear on many of the cups (kylikes) emphasize sexual activity unbecoming to Christ followers. Some cups show satyrs masturbating. Some of the women wear the bonnets of the hetaera, a hired female companion who would entertain wealthy male clients and might perform sex acts for them.
Paul ends the chapter with strong words about gathering for the Lord's Supper. "In the following instructions I do not commend you, because when you come together it is not for the better but for the worse... When you meet together, it is not the Lord's supper that you eat."
Paul appears to condemn revelers who cause division in the Christian community (1 Cor. 11:18). He warns them that they are "guilty of profaning the body and blood of the Lord" and thus "drink judgment" upon themselves (1 Cor. 11:27-29).
Related reading: Komastic Transvestism; Transvestism in Ancient Israel by Dr. Claude Mariottini; Dionysian Cups From the 6th Century BC; Shamans and Priests: What are the differences?
Posted by Alice C. Linsley at 5:29 AM