The Canonical Texts on Bad Guys 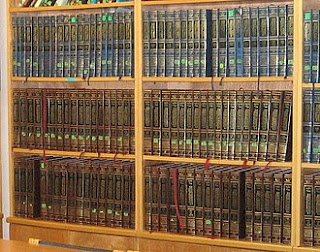 Schottenstein Edition of the Babylonian Talmud (Talmud Bavli).
All my enemies whisper together against me; they imagine the worst for me, saying, “A vile disease has afflicted him; he will never get up from the place where he lies.” Even my close friend, someone I trusted, one who shared my bread, has turned against me. (Psalm 41:7-9)
Gossip and rumors are the work of people who invest in "who's worse than me" thinking. Making someone out as the bad guy gives perverse pleasure to some people. It happens in Bible interpretation also. The Israelites are posed as righteous though they regularly disobeyed and committed evil acts. The Deuteronomist's advocacy of genocide against non-Israelites is reprehensible, yet many attempt to justify it on the basis of the good guy-bad guy fallacy. In reality, both righteous and evil persons are found in every society, community, and population. God's covenant with the Israelites does not permit them to destroy places and images sacred to their Hebrew ancestors, to level settlements of Hebrew clans other than Jacob's, or to commit genocide.
Some biblical figures are posed as evil though the biblical data does not support that view. Cain is labeled bad and Abel good. Noah is described as righteous, yet he curses his descendants after falling into a drunken stupor. Ham is labeled bad and Shem good. Esau is the bad guy and Jacob the good guy. The pattern reveals the influence of the Talmud and ignorance of the canonical Scriptures.
The Talmud is the source of many "bad guy" portrayals, some of which enter the New Testament writings. We note that the author of Hebrews cast Esau as "immoral" and "irreligious" in Hebrews 12:16, yet Esau, Isaac's proper heir, is said to be the recipient of blessings in Hebrews 11:20.
A comment posted at the Facebook group The Bible and Anthropology is instructive. Dave Anderson wrote: "Jacob acted horribly in this story. Esau has been out hunting for food for the benefit of his family, his brother has food but refuses to give it to him unless he makes an unconscionable contract. A proposal Esau must have taken for a joke. And defrauding his father with a cheap trick to steal the birthright? And after all that Esau forgave his brother. It's clear to me who the good guy in this story was."
Some New Testament writers were influenced by the Talmud in the way they present certain Old Testament characters: Cain, Esau, Korah, and Balaam are examples. Cain is remembered as a murderer, but Moses and David are not. Esau is posed as wicked though he forgives the deception of Jacob and welcomes him back to Edom. Moses’ half-brother Korah is remembered only for his challenge to Moses’ authority and not for his ritual purity, and Balaam becomes the archetype of a foolish false prophet.
Much of the argument developed by the writer of the book of Hebrews relies on rabbinic thought, not on historical realities. In Hebrew 7:14, the writer recognizes that the Messiah is from the tribe of Judah and a descendant of David, but he seems unaware that both Judah and David are descendants of an ancient caste of ruler-priests. He states that the former priests did not take oaths (Heb. 7:20-28) and yet there are historical documents that attest to oaths of office among the Horite and Sethite Hebrew priests. These oaths of office declared their loyalty to the High King who they served, and such oaths were declared before the high priests of the various royal temple complexes. Temples played an important role in resolving legal and personal disputes.

In an oath taken before a priest of the Temple of Hathor on Dec. 6, 127 BC, a royal servant Petasatet declared his innocence in the case of cloth theft. An oath was taken as a solemn appeal to divine authority represented by the high king. One type asserts a truth and is by nature a declaration such as that of Petasatet. A second type makes a promise pertaining to future actions. (See John A. Widson, “The Oath in Ancient Egypt”.)
The writer of Hebrews admits that many of the religious practices of the early priests are not familiar to him. Of the Ark of the Covenant, the mysterious manna, and Aaron’s rod that budded, he explains, “Of these things we cannot now speak in detail.” (Heb. 9:5) The primary influence on his thought appears to be the Talmud, the texts that defined Jewish identity by the time of Jesus. The Talmud encourages Jews to place it above the authority of the Hebrew Scriptures. Consider this: “My son, be more careful in the observance of the words of the Scribes than in the words of the Torah." (Talmud Erubin 21b) "He who transgresses the words of the scribes sins more gravely than the transgressors of the words of the law." (Sanhedrin X, 3, f.88b)
Even Jesus' closest disciples had to be shown that Abraham and their Hebrew ancestors believed in God Father and God Son. John explains, “At first his disciples did not understand all this. Only after Jesus was glorified did they realize that these things had been written about him and that these things had been done to him.” (John 12:16, cf. Luke 18:34)
The same illumination took place on the road to Emmaus. The disciples said to each other, "Didn't our hearts burn within us as He talked with us on the road and explained the Scriptures to us?" (Luke 24:32)
The Messianic Faith of Abraham is not Judaism
Judaism and the religion of the ancient Hebrews should not be regarded as equivalent since they have different historical contexts. Judaism does not represent the faith of Abraham the Hebrew. Jews recognize that what Abraham believed and what is believed by Jews today are not the same. Rabbi Stephen F. Wise, former Chief Rabbi of the United States, explains: "The return from Babylon and the introduction of the Babylonian Talmud mark the end of Hebrewism and the beginning of Judaism.”

Rabbi Morris Kertzer (American Jewish Committee) has written, “The Talmud is the very foundation of Jewish life. It is taught to Jewish children as soon as they are old enough to read.”
SUNY history professor, Robert Goldberg, writes; “The traditional Jew studies Talmud because it communicates ultimate truth—truth about God, truth about the world, and most important, truth about how God wants the holy community of Israel to live.”
When we set aside the disputations of the rabbis and read the canonical texts objectively, we recognize that all these biblical persons are sinners in need of redemption and forgiveness. In I Samuel 24:4-12 we read that David refused to kill King Saul when he had the opportunity to do so because he would not raise his hand against God's anointed. Yet later, David arranged the death of Uriah, one of his own leading warriors.
David was angry with Saul for hunting him like a criminal because David had served Saul with respect. Though David refused to lay his hand on God's anointed, he saw Saul as his enemy and sought God's aid in bringing about Saul's destruction. David expressed his hatred in Psalm 109.
C.S. Lewis wrote: "Psalm 109 is as unabashed a hymn of hate as was ever written. The poet has a detailed programme for his enemy which he hopes God will carry out. The enemy is to be placed under a wicked ruler. He is to have 'an accuser' perpetually at his side: whether an evil spirit, a 'Satan', as our Prayer Book version renders it, or merely a human accuser - a spy, an agent provocateur, a member of the secret police (v. 5). If the enemy attempts to have any religious life, this, far from improving his position, must make him even worse: 'let his prayer be turned into sin' (v. 6). And after his death - which had better, please, be early (v. 7) - his widow and children and descendants are to live in unrelieved misery (vv. 8-12).
What makes our blood run cold, even more than the unrestrained vindictiveness, is the writer's untroubled conscience. He has no qualms, scruples, or reservations; no shame. He gives hatred free rein - encourages and spurs it on - in a sort of ghastly innocence. He offers these feelings, just as they are, to God, never doubting that they will be acceptable: turning straight from the maledictions to 'Deal thou with me, O Lord God, according unto thy Name: for sweet is thy mercy' (v. 20)." (C.S. Lewis, Christian Reflections)
When we focus on the canonical texts alone, the good guys do not always seem righteous, and the bad guys often appear righteous. There is no cause for spiritual pride, and no justified claim to moral superiority. Before God's righteousness all are filthy beggars. Two days before he died, Martin Luther wrote, “We are beggars, it is true.”
Related reading: War in the Old Testament; Abraham's Faith Lives in Christianity; The Talmud Versus the Doctrine of the Lord