Funerary Rites and the Hope of Resurrection 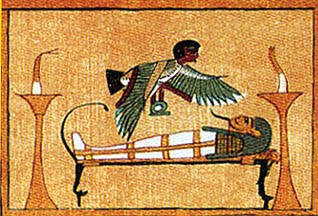 An angelic being holds the Shen sign representing eternal life over the deceased king.
Dr. Alice C. Linsley
Some early Hebrew priests were responsible for embalming, funerals, and the maintenance of burial sites. They presided over mortuary rituals and recited prayers to God Father (Ra/Anu) and God Son (Horus/Enki) while wrapping the mummies. Some Hebrew priests were retained to offer daily prayers for deceased members of royal families who maintained elaborate mortuary sites. These priests were paid by a family to perform the daily offerings at the tomb of their departed loved ones.
Examples of these priestly prayers are found in the Pyramid Tests (2400 BC) and the Coffin Texts (2000 BC). These texts speak of the hope of bodily resurrection. A Horite song found at the royal complex at Ugarit, speaks of Horus descending to the place of the dead "to announce good tidings." Horus is described as rising on the third day (The Ancient Egyptian Pyramid Texts, Utterance 667).
The Pyramid Texts, the Coffin Texts, and the Egyptian Book of the Dead are important sources of information about the prayers, beliefs, and funeral practices of the early Nilotic Hebrew and the Mesopotamian Hebrew priests.
Aylward M. Blackman observed that the mouth opening rite was performed on behalf of deceased rulers in Egypt and Babylonia. (See Blackman, A.M., “The Rite of Opening the Mouth”, The Journal of Egyptian Archaeology, Vol. 10, No. 1 Ap., 1924, pp. 47-59.)

The Pyramid Texts describe the priestly rituals by which the deceased ruler is purified (lustration texts) by holy water and the censing of the body and tomb. It also describes the mouth opening rite or the splitting apart of the lips of the dead that he might breathe, eat, and speak. Scholars have noted the parallels to Psalm 51. The parallels include:

“Lord, open thou my lips" (verse 15).
Sacrifices (verses 16, 17, and 19).
The earliest textual evidence of belief in bodily resurrection is found in the Nilotic texts of these early Hebrew priests. They recited funeral prayers and performed rituals on behalf of the deceased kings in hope that the king would rise from the dead.
The expectation of a Righteous Ruler who would overcome death and lead his people to immortality has been found to be a widespread and rooted in deep antiquity. It can be traced to the Nilotic belief in bodily resurrection. According to St. Augustine "the Egyptians alone believe in the resurrection, as they carefully preserved their dead bodies." ("Death, burial, and rebirth in the religions of antiquity", Jon Davies, Routledge, 1999, p. 27)
The Egyptian Coffin Texts and Pyramid Texts provide a great deal of information about Horus, the divine son of Ra. In the funerary rite the priest addresses the deceased king, saying: "Horus is a soul and he recognizes his Father in you..." (Pyramid Texts, Utterance 423)
In the Coffin Texts, the king is to be immortal in his flesh, expressed by his eating and drinking. The kmhw bread of Horus which I have eaten" (Pyramid Texts, Utterance 338) is the food of immortality. The Egyptian word km means to bring to an end, to complete, or fulfill, and hw refers to the heavenly temple or mansion of the firmament above. The Akkadian variant is khenfu cakes which are mentioned in the ancient Code of Ani.
It appears that the "kmhw bread of Horus" is what the Church Fathers regard as the one Bread which is the medicine of immortality and the antidote against death.
Concerning himself, Jesus said that "unless you eat the flesh of the Son of Man and drink his blood, you have no life in you. Whoever feeds on my flesh and drinks my blood has eternal life, and I will raise him up on the last day" (John 6:53-54).
Egyptologist Louis Vico Žabkar argues that the Nilotic concept of the "ba" is not a part of the person but is the person himself. The idea of a purely immaterial existence was entirely foreign to the Horite and Sethite Hebrew. They were confident that the body and spirit could be united after death and thus the "second death" could be avoided.

The king that rises from the grave leads his people to immortality. Heavenly recognition for the ancient Hebrew was never an individual prospect. Heavenly recognition came to the people through the righteousness of their king and ruler-priests. There was hope that the king would rise on the third day and lead his people to immortality. This processional language appears in reference to the Messiah, who has the power to deliver captives from the grave to the throne of heaven (Ps. 68:18; Ps. 7:7; Eph. 4:8). Paul speaks of Christ leading captives in his royal train.
The extent of the Risen King's reign is vast. In his resurrection body he is to "traverse the Mound of Horus of the Southerners" and "traverse the Mound of Horus of the Northerners." (PT Utterances 536 and 553)
The Risen King restores his settlements and cities, and opens doors to the Westerners, Easterners, Northerners and Southerners (Pyramid Texts, Utterance 587). He is to "betake himself to the Mansion of Horus which is in the firmament" (Pyramid Texts, Utterance 539).

The Risen King unites the peoples, restores the former state of blessedness, and joins heaven and earth.
Related reading: Early Resurrection Texts; Righteous Rulers and the Resurrection; Horite Hebrew Mounds; Signs Given That We Might Believe; Ancient Words for Priests
Posted by Alice C. Linsley at 10:34 PM