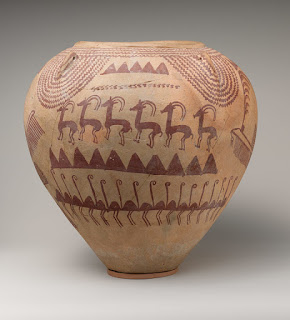 Genesis 1-11 is full of anthropologically significant data. This series looks at those chapters through the lens of anthropology and presents a detailed picture of Abraham's ancestors. I hope that readers of this blog will enjoy this series. I look forward to reading your comments and addressing your questions.

An Anthropologist Looks at Genesis 1

The phrase "In the beginning" is common in African creation stories and songs.

God created the first parents. Adam and Eve are the founding parents of the early Hebrew caste.

The serpent as an enemy who is trampled under His feet.

The first verifiably historical persons in the Bible as shown through kinship analysis.

The Proto-Saharan ruler Noah and his sons.

Boats and cows of the Proto-Saharans.

The father's curse does not negate the Heavenly Father's covenant of blessing.

An early ethnography with no mention of castes, evidence of a late source.

The movement of Abraham's ancestors out of Africa. The Hebrew ruler-priest caste spread the rudimentary Messianic Faith wherever they dispersed.

Related reading: Who Were the Horite Hebrew?; Horite and Sethite Mounds