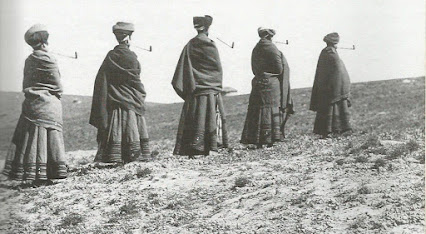 Xhosa women smoking pipes.
The photograph was taken c.1928.
Pipes are sacred ceremonial objects in many cultures. The earliest known smoking pipes (c. 4000 years) were found in Egypt inside tombs.
Many Native American populations use tobacco and pipes ceremonially. The pipe is used in the sweat lodges, when offering prayers, and as a symbol of unity. Pipes often appear in creation stories. In the Lakota creation story, Buffalo Calf Woman brings the Sacred Pipe to the Lakota to assure health, prosperity, and blessing to the people.
The Dinka of South Sudan also smoke ceremonial long pipes. This one dates to c. 1882 and is kept in the British Museum. It is made of clay, pottery, iron, wood and hide, with ornamented bowl and iron beads on tassel. 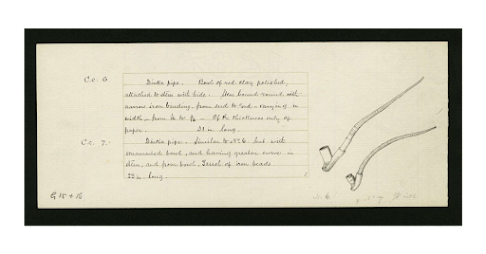 The Ashanti of West Africa also use pipes with long stems. This type of pipe bowl is called Taa sen in the Akan language. The pipe stem is made long because the pipe bowl rests on the floor while smoking. For the Ashanti pipe smoking is a social practice and when a smoker dies his favorite pipe is placed under his pillow and tobacco is burnt at the funeral.
In Xhosa culture of South Africa pipes are carried by diviners and are smoked by diviners and their clients in propitiation to the ancestors. There is always a demand for pipe-makers to craft the long-stemmed pipe (“uzalipholile”) used in rituals, such as the “umhlwayelelo” ritual – a propitiatory rite to the “abantu bomlambo”, or river people. In the “umhlwayelelo” ritual, a small amount of home-grown tobacco (“amakhwabe”) is presented to the ancestors by placing it in the water at the riverbank. A portion of the same tobacco is kept and smoked symbolically by all the participants, even non-smokers, after the gift-giving ceremony at the river.
The length of the pipe stem and the size of the bowl increase according to the owner’s social status. Older men and women use the longest-stemmed and largest-bowled pipes, called “uzalipholile.” Uzalipholile means “it has been cooled”, referring to the cooling effect that results from drawing the smoke through such a long stem.

The “shop-style” pipe, known as “umbhekaphesheya” (meaning to travel across the ocean), is a hybrid between the Xhosa traditional pipe and a European store-bought pipe (“upexe”), and is used by men only. Like the “uzalipholile” pipe, it is also made from the root of “umnyamanzi” (the common hook thorn tree), it features a permanent mouthpiece, and it has no spur. The bowl of the “umbhekaphesheya” pipe points away from the stem at an angle of about 45 degrees, hence the reference to pointing across the sea. 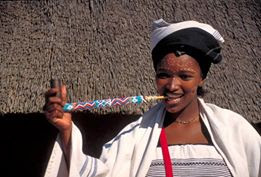 Pipe-making among the amaXhosa is a specialized craft traditionally practiced by men only. There are still excellent craftsmen in Xhosaland. Pipe-makers supplement their income by making wooden spoons and yokes for oxen and mending household items like wooden stools.

Often non-smokers have a pipe or several pipes on display in their homes as ornaments, but also as a symbolic link to tradition. Some men and women, even non-smokers, carry a pipe in a beaded tobacco bag (“inxili”) as traditional attire when they attend rituals and traditional functions. Some pipe-makers also sell their pipes to curio shops in towns or holiday resorts where Xhosa crafts are marketed.