Bust of Queen Tiye wearing the Hathor crown, a sign of divine appointment.

Queen Tiye was the principal wife of Amenhotep III (ca.1388-1351/50 BC). He reigned for 39 years over a vast empire that extended from the Upper Nile to the Orontes in modern-day Turkey. The Amarna correspondence demonstrates the close diplomatic contact of the Egyptian and Hurrian/Horite royal courts at this time.

Queen Tiye played a public role during Amenhotep's reign. Her name and honorific titles appear on many monuments constructed during his reign and she is commemorated on many scarabs.

Amenhotep III built or rebuilt the temples at Luxor, Memphis, Elkab, and Armant. At Thebes he built a palace complex and a monumental temple on the West Bank of the Nile. The Colossi of Memmon before the entrance to Amenhotep's mortuary complex are still standing.

Amenhotep III built the Nubian temples of Soleb (Sulb) and Amara West where inscriptions refer to the "Shasu of Yhw" (YHWH). Some speculate that the name of Tiye's father YuYa includes reference to the High God as it appeared on Nubian inscriptions.

He also built shrines and palaces for Queen Tiye, and an artificial lake about a mile long. He announced this on commemorative scarabs, telling the world that it was large enough for Queen Tiye to sail her boat called "The Aten Gleams."

Amenhotep issued a number of scarabs with long inscriptions describing events of his reign. One inscription describes his territory. The southern border of his empire was at the fortified settlement of Karoy in Nubia and the northern border was Naharin in southern Turkey. These inscriptions reveal Tiye's importance in the way her husband's territorial boundaries are given in reference to her and her family.

The so-called "marriage scarabs" record the name of Queen Tiye along with the names of her noble parents. Many royal persons of the Iron Age and before traced their ancestry by double descent. Tiye's father's name was Yuya and her mother's name was Tjuya. 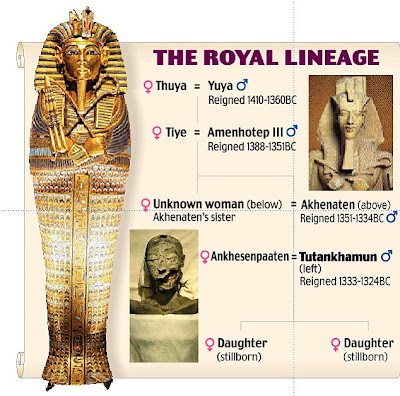 Tuya and Tjuya also had a son named Anen. Anen carried the titles Chancellor of Lower Egypt, Second Prophet of Amun, sm-priest of Heliopolis (biblical On), and Divine Father. During the New Kingdom (c. 1539–1075 BC) the great temple of Ra at Heliopolis rivaled that of Amon at Thebes, and the Horite Hebrew priesthood of Heliopolis wielded great influence.
In April 2011, a number of artefacts looted from the Cairo Museum were recovered. One of the 10 missing shabtis of Yuya and Tjuya (JE 68984) was returned, as was Tutankhamun's gilded bronze and wooden trumpet (JE 62008).
Zahi Hawass, the former Minister of State for Antiquities Affairs of Egypt, considers Amenhotep III the greatest monarch ever to reign over the Two Lands.

Related reading: The Commemorative Scarabs of Amenhotep III; The Private Tomb of Yuya and Tjuya; The Wives' Settlements Mark the Boundaries