A Brief History of the Lake Chad Region

Ibn Khaldun, the historian who wrote "Muqaddimah" (1377 AD) ranked the Kanem-Bornu Empire alongside the empires of the Romans, Turks, Chinese, and the other great civilizations of the Medieval period.
The populations of the Kanuri Kingdom with its remnant provinces and states like Borno and Yobe in Nigeria, Mao, the capital of Prefecture of Kanem in Chad, as well as Kusri and Baghirmi in Cameroon are believed to have come from the East, possibly the Nile Valley or eastern Arabia (Yemen).
Zinder in Niger was also part of the Kanuri kingdom. A mound pyramid and possible sphinx have been found there. According to Souley Garba, who discovered the twin pyramids and sphinx of Zinder, the ancient Egyptian map of that area shows a long-horned cow. The Egyptians knew the region to be rich in cattle.

The Kanuri people in the region of Lake Chad emerged as the great Bornu kingdom and later as the Kanem-Bornu Empire. The Kanuri languages are classified as Nilo-Saharan.
Before the Kanuri Kingdom of the Middle Ages, there were permanent, year-round settlements in the region of Lake Chad. This has been confirmed by excavations between 1993-1996 of four mounds on the southern fringe of Lake Chad. These date to approximately 1000 B.C. and are contemporaneous with the rise of the Davidic Dynasty. The people of these lakeside settlements lived by hunting, gathering, fishing, and cattle herding. There is evidence of the cultivation of Pennisteum or Pearl Millet, the grains of which are higher in protein and dietary fiber than rice.
During the African Aqualithic, Lake Mega-Chad attained an area of 139382 square miles (361,000 kilometers 2) and a depth of up to 525 feet (160 meters). It drew herds of antelope, and humans settled along the fringes of the lake.
In the early Holocene, climate changes posed challenges to the sedentary populations. The need for water and grasslands for cattle led to migrations across the continent and promoted the adoption and spread of pastoralism.
The Green Sahara 10,000 years ago
Settlements dating to a much earlier time have been found north of Lake Chad in Niger. In 2000 a major discovery made by a team led by paleontologist Paul Sereno opened a window onto the Green Sahara of 10,000 years ago. Sereno and his team discovered a large cemetery on the edge of a paleolake in Niger.
The Gobero area was settled by the Kiffian people about 9700 years ago. The Kiffians were a tall and robust people. They lived on the upper layer of a dune and established a cemetery there. The Gobero site is the earliest known cemetery in the Sahara and the skeletons there indicate that some of the people were over six feet tall. This is a photo of a Gobero skeleton (specimen G3B8). It measures six feet six inches. 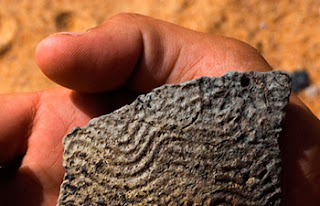 Gobero-Kiffian pottery sherd with characteristic parallel wavy lines.
When the humid conditions changed around 8000 years ago, the paleolake at Gobero dried up and the Kiffian people left the area.
The climate improved around 1000 years later and the lake filled again. People returned to the area and again lived on the dune and buried their dead in the cemetery. However, the Tenereans were shorter and lighter in build. Their middens are filled with clams, small fish, antelope bones, and some cow bones. They apparently had domesticated cattle. 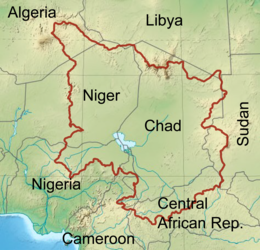 The biblical data and the historical and archaeological data suggest that the Lake Chad region was Noah's homeland. The area was prone to monsoonal flooding because the Lake Chad Basin is relatively flat and ringed by mountains from which water drained into the basin. The basin is outlined in red on the map above.
Related reading: Kanuri Lexicon; Archaeological and Ethnohistorical Investigations Along the Southern Fringes of Lake Chad, 1993-1996; The Gobero Story; Boats and Cows in the Green Sahara; The Location and Geography of Lake Mega-Chad; The Wet Sahara; Discovering the Historical Noah
Posted by Alice C. Linsley at 4:59 PM