Inquiry Into the Development of Western Civilization 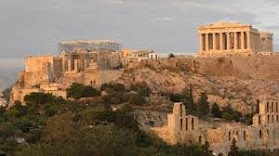 Recently, I was asked to suggest an avenue of inquiry that would best explain the development of western civilization. Most people point to the Romans and classical Latin culture for an answer to that question. However, there are always antecedents, and pursuing antecedents is very much the work of Biblical Anthropology.

The Roman Empire was influenced by Greek culture and philosophy.

The Greeks were enamored of and influenced by ancient Egyptian culture and religion. (Plato studied for 13 years under a Nilotic priest.) 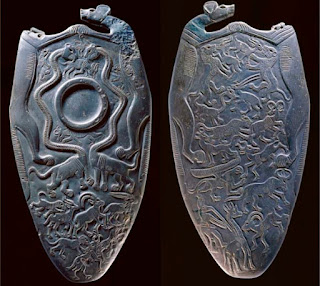 The Upper Nile Valley and the Lower Nile Valley were united for the first time by Narmer at the beginning of the First Dynastic Period (c. 3150 - 2613 BC). Narmer's Palette was discovered among a cache of sacred implements buried within a Horite temple at Hierakonpolis, also called Nekhen on the Nile. The temple was a large structure, fronted by huge cedar pillars, and it became the prototype for temple architecture for many millennia.

Nekhen is called the Falcon City and the falcon was the totem of Horus, the son of Ra. Nekhen was a very prestigious shrine city with votive offerings ten times larger than the normal mace heads and bowls found elsewhere. Other Horite shrines or "mounds" are mentioned in the Pyramid Texts (2400-200 BC). The Horite and the Sethite priests served the same God and the same king but maintained separate mounds. Their relationship is that of a moiety. The term "moiety" refers to one people organized into two ritual groups.

We know from the study of Horite and Sethite writings on the walls of royal tombs that they expected a righteous king to rise from the dead and lead his people to immortality. They also believed in God Father and God Son. Among the Nilotic Horites, God Father was called Ra (from the ancient Egyptian word Re, meaning "father") and the son was called Horus (from the ancient Egyptian HR, meaning Most High One). Among the Mesopotamian Horites/Hurrians, God Father was called Ani and the son was called Enki.

The earliest law codes were of a religious nature and implemented by rulers who were served by royal priests, some of whom were certainly Hebrew. (In Akkadian the Hebrew ruler-priest caste was called Abrutu, from the Akkadian word for priest - abru). The Code of Ani is a negatively worded moral code, like the Ten Commandments. It dates to c. 2500 BC and is contemporaneous with The Reforms of Urukagina, Sumeria (2500-2350 BC). However, the Law of Tehut dates to about 500 years earlier. That code is associated with King Menes (2930-2900 BC) who administered justice and issued edicts which were designed to improve food production and distribution, guard the rights of ruling families, improve education and enhance knowledge of the natural world through geometry and astronomy.

In my view, we reasonably can point to the early Hebrew as a significant source of the Faith that later became established as the Christian foundations of Western civilization.