The Male Priesthood Has Deep Roots 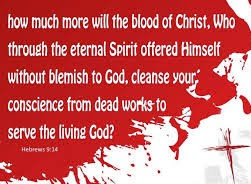 Every tribal society studied by anthropologists regards blood as having power. This "primitive" belief is evident in Genesis 4:10. Shed blood was regarded as potentially dangerous or potentially curative. There were rituals appropriate for women after childbirth and for hunters after the kill. The blood of those killed in combat was to be washed off as soon as possible, and the blood guilt of warriors was to be addressed. Melchizedek, Priest of the Most High God, ministered to Abraham after combat, and the ceremony involved bread and wine (Gen. 14).
Based on evidence of 100,000+ years of red ochre burial, a symbolic blood covering, it is apparent that blood was linked to the hope for life after death, or immortality.
Very early in human history the offices of shaman and priest emerged to address blood anxiety and blood guilt. These are the earliest known religious offices, and both serve as mediators between the natural and supernatural. However, their practices are very different, in that priests are forbidden to engage spirits.
The blood shed in war and hunting was not taken lightly by early populations. Nor was the blood shed by women in childbirth and their monthly cycle. All blood was to be accounted for by rituals, prayers, and offerings. This was the work of the priest and shaman.
There were women shamans, but the taboo about mixing male-female bloods or having both present at the same place (as at the altar) meant that there were never any women priests. The so-called "priestesses" of the ancient world were shamans, not sacrificing priests. They served in temples as oracles who delivered messages in trance states, which is characteristic of shamans, not priests.
When early man took life in the hunt, the spiritual leader offered prayers and performed rituals to protect the community from blood guilt. The blood of the hunted animals was accounted for according to sacred law. Shamans rarely offer blood sacrifice. However, as early as 7000 years ago, priests at Catal Huyuk sacrificed animals, and 6000 years Nilotic priests offered blood sacrifice for the most grave offenses.
Anthropological study of the origins of the priesthood indicate that the male priest stands as a symbol of prayer, sacrifice to cover blood guilt, and sacred law. This observed and documented reality stands behind the Church’s tradition of the male priesthood. It is a central feature of the received Messianic Tradition, and the Church alone has the honor of preserving it.
Related reading: Why Women Were Never Priests; Ten Objections to Women Priests; The Church's Consensus on the Priesthood; Blood and Gender Distinctions; On Blood and the Impulse to Immortality; The Priesthood in Anthropological Perspective; Jesus' Blood is Restorative
Posted by Alice C. Linsley at 12:36 PM