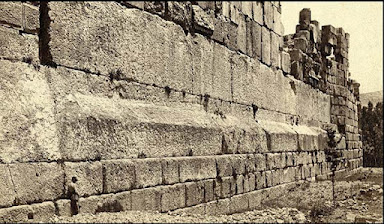 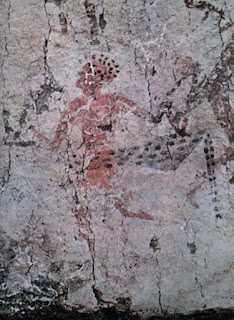 Figure wearing leopard skin, perhaps a priest, performs ritual at Çatal höyük (7000 BC).
The first temples appeared between 12,000 and 3000 BC. However, people rarely went to the temples in ancient times. These were the precincts of rulers and priests. The average person did not routinely attend worship in these temples. When a commoner went to the temple, it was to seek guidance and/or healing from the priests who served as mediators between the High God and the community. Some people would go up to the High Places to celebrate important festivals and feasts. The feasts were established and upheld by the king and his royal priests.
Solemn fasts were also declared by the king's royal priests. Fasts were declared for the death of a king, member of the king's family, or a high royal official. Fasting was also an act of contrition. The ancient Egyptians and Babylonians fasted as a form of penance, and to deflect what they considered to be divine punishment. Famine, impending war, and natural disasters were regarded as signs of God's wrath.
Jonah 3 describes a time when the Assyrians were covered with sackcloth, weeping, fasting, and praying to God for forgiveness. Joel 1:13-15 provides another example: "Put on sackcloth and lament, O priests; wail, O ministers of the altar. Come, spend the night in sackcloth, O ministers of my God, because the grain and drink offerings are withheld from the house of your God. Consecrate a fast; proclaim a solemn assembly! Gather the elders and all the residents of the land to the house of the LORD your God, and cry out to the LORD. Alas for the day! For the Day of the LORD is near, and it will come as destruction from the Almighty..."
A distinction must be made between shrines, temples, and synagogues. Shrines were local gathering places usually near wells, rivers or lakes, or in sacred groves. They were not formal places of worship like temples. Shrines were usually under the protection of a local chief and tended by a holy man, priest, or shaman. They were places of contemplation, veneration of ancestors, and where one went to seek guidance. Often the holy man or woman could be found sitting under a sacred tree. This practice is extremely ancient and predates the time of Abraham.
Temples were built by high kings and were under their protection. These were places of worship of the High God whose name was associated with the king's realm. Royal priests (ruler-priests) served at the temples. They were organized into orders or guilds: lectors, musicians, guards, prophets/seers, sacrificing priests, physicians, purification priests, etc.
Commoners did not attend weekly worship at shrines and temples. Weekly attendance by the average citizen began in the synagogues, and the worship of liturgical churches is patterned on the synagogue: Scripture readings, prayers, and homilies. There is no consensus as to when the synagogue emerged. The oldest dated evidence of a synagogue is from the third century BCE, but some scholars think that the synagogue developed after the destruction of Solomon’s Temple in 586 BCE.
The synagogue drew local people for worship, prayer, religious instruction, and guidance. Apparently, healing took place in the synagogues also, but the astonishment and resentments roused by Jesus  healing in the synagogue suggest that it was not a common occurrence.
Some citizens of the town were more active in the life of the synagogue than others. The average person's life was consumed with daily tasks such as plowing, cultivating, harvesting, tending livestock, repairing fences, preparing meals, doing laundry, etc. Holy days (holidays) provided a break from the daily routines and a period of rest (sabbath). Prayer was woven into the fabric of the day, offered at family meals, and when possible, at the local synagogue.
Synagogues were found wherever the Jews had dispersed. There were synagogues in Alexandria, Sardis, and Galilee. Galilee has one of the highest concentrations of ancient synagogues, with at least 50 having been identified by archaeologists. Acts 6:9 speaks of the “Synagogue of the Freedmen,” composed of Jews from Cyrene, North African, Cilicia and Asia. Acts 17:2 speaks of how upon arriving in a new town, Paul went first to the synagogue “as was his custom”.
The synagogue in ancient Capernaum was located in the center of the village. It was built of white limestone ashlar stones, and is known as the 'White' Synagogue. All four gospels report that Jesus often attended the synagogue there. Matthew 4:13 describes Jesus settling in Capernaum. Mark 1:21-28 describes Jesus teaching and healing in the Capernaum synagogue. Luke 4:16-37 describes Jesus teaching regularly in the synagogue.
The synagogues were supported by local nobles, some of whom were Roman officials. Various rulers of the synagogues are mentioned in the Bible. Among them are Jairus (Mark 5:22-43; Matt 9:18-26; Luke 8:40-56); an unnamed man who became indignant because Jesus healed a crippled woman on the Sabbath (Luke 13:10-17); those who permitted Paul and Barnabas to speak in the synagogue at Antioch of Pisidia (Acts 13:15); Crispus, the ruler of the synagogue at Corinth (Acts 18:8); and Sosthenes, also a ruler of the synagogue at Corinth (Acts 18:7).
Related reading: Officers of the Synagogues in Ancient Rome; Rulers of the Ancient World; Islamic State Destruction of the Palmyras Temple; Shrine for Ancestor Worship Discovered in Egypt; Hayden, Brian (17 December 2003). "Complexity in the Hunter-Gatherer World". Shamans, Sorcerers, and Saints: A Prehistory of Religion. Washington, DC: Smithsonian Books. p. 122. ISBN 9781588341686.
Posted by Alice C. Linsley at 11:29 AM