Concubinage Among the Hebrew 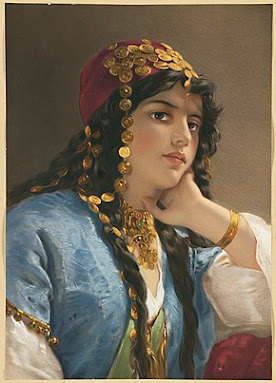 In ancient times and still today, concubines serve kings and emperors. The book of Esther is the story of a young Jewish woman who became a concubine in the palace of a Persian king.

The Bible mentions numerous concubines, including the mother of King Abimelech, the son of Gideon by his concubine. David had concubines, and his son Solomon is said to have had 300 concubines. King Saul had at least one concubine. Her name was Rizpah (II Sam. 3:7).

Concubines did not have the same social status as wives. However, many concubines of high social status found additional recognition by serving royal wives. This appears to be the case with Hagar and Masek, Abraham’s concubines. Hagar served Sarah, and Masek probably served Keturah, Abraham's second wife. Hagar was the mother of Ishmael and Masek was the mother of Eliezer. Had Sarah remained without a son, the rightful heir to Abraham’s throne would have been Eliezer (Gen. 15). The Septuagint (Greek Old Testament) clearly states that he was a son of Abraham by Masek, but this is not found in the Masoretic text.

Likewise, Jacob’s concubines Zilpah and Bilhah served his wives. Zilpah served Leah and was the mother of Gad and Asher (Gen. 30). Bilhah served Rachel and was the mother of Dan and Naphtali (Gen. 29). If the arrangements for the sons of Hagar and Masek is like that of the sons of Bilhah and Zilpah, Ishmael and Eliezer received land settlements, as did Jacob's sons by his concubines. Both Ishmael and Jacob became the heads of twelve-clan confederations.

According to Horite/Hurrian law, when the principal wife was unable to produce an heir, she could give her handmaid to her husband to produce an heir. This is what Sarah hoped to achieve when she gave Hagar to Abraham (Gen. 16:1-4). This practice appears to have been the exception. Usually, the sons of concubines received grants and were sent away from the territory of the ruler's heir.

Concubines who were handmaids of royal wives resided in the settlements of the women they served. When Sarah became jealous of Hagar, whose son Ishmael was favored by Abraham, she demanded that Hagar be sent away (Gen. 21:10-12).
Apparently, dissatisfied concubines could return to their father’s house. Judges 19:1-3 reports that a priest’s concubine left him and returned to her father’s house in Bethlehem.

Email ThisBlogThis!Share to TwitterShare to FacebookShare to Pinterest
Labels: concubines