In December 1928 a work crew from kibbutz Beth Alpha was digging a drainage canal when a worker's shovel started picking up pieces of mosaic. Soon after, Eliezer Lippa Sukenik and Nahman Avigad of Hebrew University began to excavate the site. They uncovered an almost complete mosaic on the floor of an ancient synagogue. When it was exposed, the mosaic measured 28 meters long (91.8 feet) and 14 meters wide (45.9 feet). 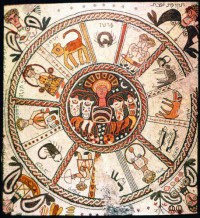 In the square panel of the Beth Alpha mosaic was a zodiac with 12 symbols, surrounded by four female figures at the corners, representing the seasons of the year. (Credit: Art Resource, NY)
In the center, a man is pictured driving a four-horse chariot through the heavens. He represents the annointed of the High God whose symbol was the sun. Among the ancient Horite Hebrew, the High God was said to have a son who rode his solar barque or solar chariot. This explains why rays of the sun radiate from the man's head.
Similar zodiacs with solar symbolism have been found in nunerous synagogues, testifying to the importance of solar symbolism in Judaism. The Jewish Sun blessing (Birka Hachama) is performed every 28 years.
Related reading: Solar Symbolism Among the R1 Peoples; Jewish Worship, Pagan Symbols; Zodiacs in Synagogues; Solar Imagery of the Proto-Gospel; The Sun and Celestial Horses; Astronomical Ceiling Diagrams
Posted by Alice C. Linsley at 5:04 PM