The Golden Calf in Anthropological Context 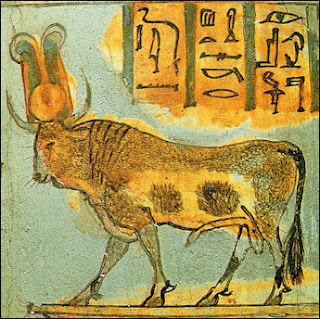 The celestial bull calf on an ancient Egyptian coffin; a symbol of salvation?
Alice C. Linsley

A detailed study of the biblical information about Aaron is revealing. He was a Hebrew priest who fashioned a golden bull calf, a Horite symbol of God's son, Horus (HR meaning "most High One" in Ancient Egyptian). The bull was a celestial symbol for God. In fact, the English word God likely comes from the anceint Akkadian word for bull, which is gud. This would explain why in Iceland, þjór' (thor) means bull and is the name of the High God of the Nordic pantheon, later displaced by Odin.
The Danish word for bull is tyr. In the Swedish language bull is tjur. Bull in Latin is taurus. These share the root TR which suggests a connection to blood, purity, radiance, the Sun, copper, gold, and holiness. The TR root is very old and it reflects the polysemic feature of the oldest known lexicons.
The terms for ritual purity in Sumerian, Akkadian, biblical Hebrew, Hittite, and Ugaritic are related to the idea of radiance. (See The Semantics of Purity in the Ancient Near East, p. 5.) The ancient Nilotes associated purity with the radiance of the sun, the emblem of the High God.
The Proto-Dravidian word tor refers to blood. In Hausa, toro means clean, and in Tamil tiru means holy. There is a relationship between tor and the Hebrew thr which means "to be pure." The people were made pure when the High Priest sacrificed the bull and made atonement with the blood of the sin offering (Ex. 30:1-10). In ancient Nilotic mythology, the deceased king must eat the celestial bull to achieve immortality. 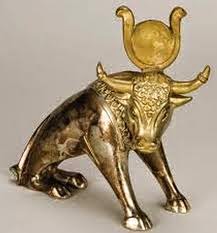 Aaron's golden bull calf was a sacred symbol among the Horite Hebrew before Judaism. A late Jewish hand on Exodus suggests that this was an idol, and yet the bull was the central image at the shrines of Bethel and Dan. It represents the son's sacrifice that atones for the sins of the people. Judaism rejects the Horite Hebrew belief in God Father and God Son.
The sacrificial bull calf was shown overshadowed by the sun, a sign of divine appointment for the Horite Hebrew. This is a Messianic image. Aaron is not criticized for making this image. However, the people are criticized for worshiping the image. Here a distinction must be made between the symbolism of the golden bull calf and the actions of the people. To express this for people today, we make the distinction between worship of the cross and worship of the Messiah who died on the cross.

Related reading: Sky Bull Eaten to Gain Immortality; The Sky Bull as a Messianic Image; The Afro-Asiatic Conception of Purity