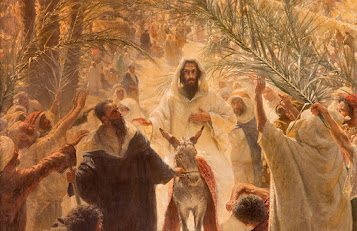 Jesus greeted as a king in Jerusalem

The Jebusites were a well-entrenched “Canaanite” population with two main branches. One branch lived in the region of Gilead and the other in and around Jerusalem which was a Jebusite stronghold before David’s time. 1 Chronicles 11:4 – “David and all Israel marched to Jerusalem, that is Jebus, where the Jebusites were, the inhabitants of the land.”

David purchased a threshing floor from the Jebusite chief Araunah and used the site to erect an altar to God. Threshing floors were sacred places among many biblical populations.

The two Canaanite groups of Jebusites maintained their solidarity, giving military aid to each other when needed. They were never defeated or driven out of Canaan by the Israelites. The description of David's conquest influenced how the Jebusites were presented in the Deuteronomistic history, but in fact, Jebusites served in David’s army and court. 1 Kings 9:20-21 makes it clear that Jebusites also served in Solomon’s kingdom.

The Jebusites are a very ancient people who spread into Canaan and westward from the Nile Valley into Nigeria where they are known as “Ijebu.” As with the Canaanite Jebusites, the Ijebu are divided into two groups: the Nago-Jebu and the Ketu-Jebu. Both divisions take the serpent as their totem. Ketu and Naga are two ancient words for serpent. In ancient Egyptian literature the cosmic serpent is called RahuKetu.

The term “Jebusite” is derived from Yebu, which designated sacred shrines such as the one on Elephantine Island (Yebu) on the Nile. Jerusalem was originally called Yebu/Jebu.

Today the two IJebu provinces are called Jebu Remu and Jebu Ode, and the title of their high king is "Awujali.” The IJebu are classified as Yoruba, but the term 'Yoruba' was applied to related tribal groups only after the 18th century. 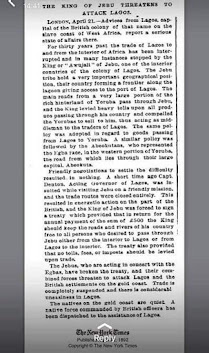 In 1892, the New York Times reported on the IJebu control of the water systems of the Benue Trough extending to the Port of Lagos. The headline (shown above) reads that the Ijebu king threatened to attack Lagos.

When the people greeted Jesus as he entered Jerusalem, they greeted him with palm branches as a king to be enthroned. Ceremonial installation of rulers with palms was an ancient tradition and probably goes back to the time when Jerusalem was a Jebusite city. Even today fresh palm tree fronds are used ceremonially at the installation of Ijebu rulers. Jude Adebo Adeleye Ogunade writes in his memoir about growing up Ijebu. He was warned not to touch the leaves of the Igi-Ose tree because, as his Mama Eleni explained, "That tree is the tree whose leaves are used to install Chiefs and Kings of Ijebu and as your grandfather was a custodian of the rites of chieftaincy and kingship you must not play with its leaves."

Email ThisBlogThis!Share to TwitterShare to FacebookShare to Pinterest
Labels: Jebusites